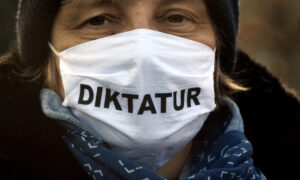 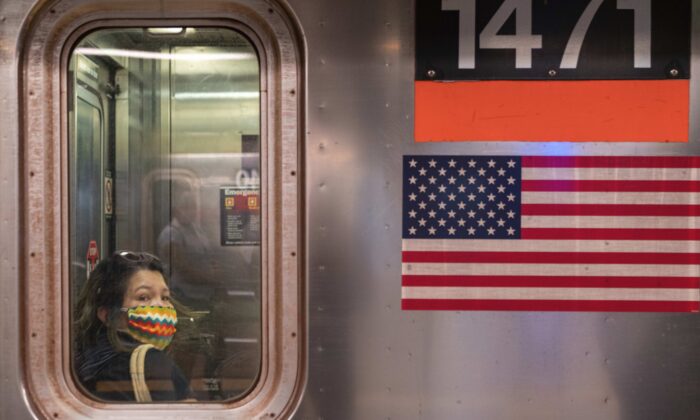 A person wearing a mask rides the subway during rush hour on the first day of phase one of the reopening after the CCP virus lockdown in New York City on June 8, 2020. (David Dee Delgado/Getty Images)
US News

A Washington man has filed a federal lawsuit against the Centers for Disease Control and Prevention (CDC), President Joe Biden, and several other agencies, challenging the mask mandate on transportation systems.

Lucas Wall, who describes himself as a “frequent traveler,” argued in his lawsuit (pdf) that having to wear masks on transportation systems is unconstitutional, particularly while traveling within a state.

“They are improper, illegal, and unconstitutional exercises of executive authority,” Wall wrote.

Wall, who is fully vaccinated against COVID-19, was turned away by Transportation Security Administration agents at Orlando International Airport on June 2 when they saw he wasn’t wearing a mask.

“No, I will not wear a mask, that’s why I have my vaccination card,” Wall told an agent.

That agent then told Wall that he needed a mask to fly from Orlando, Florida, to Ft. Lauderdale, Florida.

Wall refused to wear a mask, saying that he suffers from anxiety and breathing difficulties.

“I am a frequent traveler, having flown more than 1.5 million miles and visited 134 nations as well as all 56 U.S. states and territories,” Wall wrote in his lawsuit. “I am currently stranded at my mother’s house in The Villages, Florida … because Defendant TSA refused to let me board a flight June 2, 2021, out of Orlando International Airport (MCO) for not wearing a mask even though I have a qualifying disability.”

“Due to my Generalized Anxiety Disorder, I have never covered my face. I tried a mask a couple times for brief periods last year, but had to remove it after five or so minutes because it caused me to instigate a feeling of a panic attack, including hyperventilating and other breathing trouble. I carry cards in my wallet to hand to anybody who asks me to wear a mask.”

The mask mandates have “ignored countless scientific and medical data showing that face masks are totally ineffective in reducing coronavirus spread,” Wall claimed in his lawsuit.

In March, the CDC updated its guidance on mask-wearing while using public transportation.

In its latest update, the CDC said people fully vaccinated against COVID-19, the disease caused by the CCP (Chinese Communist Party) virus, are generally no longer required to wear masks or social distance, including in most indoor areas.

“Biden has no legal authority to do that,” Wall told ABC 7, referring to the current mask mandates. “It’s long past time this illegal and what I argue unconstitutional restriction be removed.”

He said he wants all transportation mask mandates to be lifted.

“I’m not going to be able to travel or be in airports for hours at a time just sitting around and wearing a mask that restricts my breathing so much and makes me uncomfortable,” Wall told the Washington Examiner.

The CDC didn’t respond to a request for comment by press time.