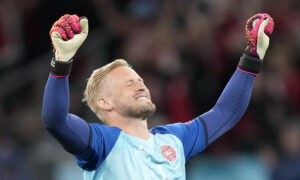 French ‘Yellow Vest’ Protester Has Hand ‘Blown Off by a Grenade,’ Report Says

A French protester taking part in the “yellow vest” demonstrations against President Emmanuel Macron reportedly was seriously injured by a grenade on Dec. 8 in Paris.

Sud Ouest, a French newspaper, reported that the unidentified protester apparently tried to grab a crowd-control grenade and throw it back at police. The device then blew up in his hand.

Olivier Etienne, the deputy public prosecutor in Bordeaux, confirmed the details to the publication.

Graphic footage uploaded on social media showed a man holding what used to be his hand while profusely bleeding. It’s also not clear if the man is the same referenced in the Sud Ouest article.

“This Saturday night, a protester was seriously wounded in the hand by trying to recover a grenade … in order to send it back,” the report said, according to a translation.

The video that apparently showed the man with the bloody stump for a hand was first uploaded to Facebook group France en colere, or Angry France (WARNING: The video footage is very graphic and Facebook covered up the video).

According to the Daily Mail, a woman also apparently lost her eye during riots in Paris. Graphic footage uploaded online also showed her bleeding from her eye.

Macron will address the country on Dec. 10 to try and pacify the “yellow vest” protesters. The president will also meet with Senate president Gérard Larcher and National Assembly president Richard Ferrand, France24 reported.

“The president wants to bring together all the political, territorial, economic and social forces at these difficult times for the nation, in order to hear their voices and proposals with a view to mobilize them into action,” Elysee Palace said.

France24 reported that more than 1,000 people were arrested during the Paris protests. French Interior Minister Christophe Castaner said 125,000 people took part in the demonstrations across the country.

The economy minister lamented the damage to the economy, according to The Associated Press.

“This is a catastrophe for commerce, it’s a catastrophe for our economy,” Bruno Le Maire, the economy minister, said Sunday while visiting merchants around the Saint Lazare train station, among areas hit by vandalism as the pre-Christmas shopping season got underway.

“The dialogue has begun and it must continue,” Prime Minister Edouard Philippe said, according to France24. “The president will speak, and will propose measures that will feed this dialogue.”

“What happened yesterday and the Saturday before, it was unforgettable,” said Jean-Pierre Duclos, a local from Paris. “It happened in a country like France that supposed to be sophisticated, it’s unbearable and it cannot be forgiven.”

Police and protesters also clashed in other French cities, notably Marseille, Toulouse, and Bordeaux, and in neighboring Belgium. Some protesters took aim Saturday at the French border with Italy, creating huge traffic jams. Some 135 people were injured nationwide, including the 71 in Paris.

Saturday’s protests were a direct blow to Macron, who made a stunning retreat last week and abandoned the fuel tax rise that initially prompted the yellow vest protest movement a month ago.