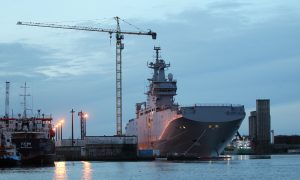 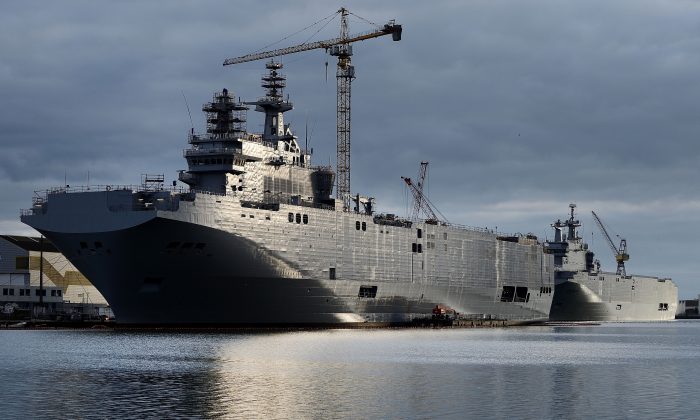 Over the past nine months, as Europe was shaken by Russian adventurism, France’s contract to build and deliver two Mistral-class helicopter carriers to Russia underwent from routine to intense scrutiny. The pressure on the French government to scrub the deal, however, could be unfair and even counterproductive. Rather, the United States and European Union should focus on practical solutions to the problem because of the cost incurred by France in building the vessels and possible penalties for breach of contract.

In 2011, France signed the contract with Russia. Three years later, Russia backed Crimean and eastern Ukrainian separatists, annexed Crimea, and now supplies militants in East Ukraine. The West responded with ever-increasing sanctions. France initially stated that this would have no impact on the Mistral deal. As pressure mounted, France offered that it might withhold the second carrier, and then put the contract on hold. France subsequently stated that it would not hand over the completed carrier until Russia met newly imposed conditions: a permanent cease-fire in Ukraine and roadmap for the permanent settlement of the dispute. Russia responded by setting a deadline: the end of November for the first ship’s delivery, or it would initiate legal proceedings. Rebuffing this move, France indefinitely suspended the agreement.

France’s continued refusal to cancel the contract reveals its struggle to complete it without offending its allies. Yet France’s true warship problem is offsetting costs, not completion of the contract. It cannot supply the Russian military while simultaneously denouncing its actions. In this vein, the United States and its allies should take a much more serious and active role in finding alternative destinations for the Mistrals. While it is hypocritical of France to maintain the viability of its warship contract, it is also unfair for the United States and others to demand cancellation without concerted efforts to mitigate resulting costs. This situation is made vivid by showing the weakness of every argument for contract completion.

• The carriers are not that strong. Some, mainly Russians, have downplayed the strength of the carriers and any meaningful military advantage they could give Russia. U.S. officials are even reported to have discounted the Mistral sale because of its lack of armoring, redundant systems, extensive compartmentalization and commercial design. Yet the vessels are powerful with regard to their intended purposes: force projection and command. They offer extensive capacity as helicopter carriers, transports, staging grounds for amphibious assaults, and operational command centers. Given the relatively weak military capabilities of Russia’s recent targets, Georgia and Ukraine, and other former Soviet republics and satellite states, the Mistrals are formidable warships. Russian Adm. Vladimir Vysotcky has stated that, with these vessels, the 2008 invasion of Georgia would have taken “40 minutes instead of 26 hours.” Perhaps hyperbole, but the ships would expand Russia’s ability to project power over its neighbors.

• Possession of the carriers is the main issue. The French-Russian deal includes a substantial transfer of technology and construction capability. While the first two ships are to be built in France, Russia possesses an option to build another two in domestic shipyards. Technology and designs for the Mistrals are to be transferred to Russia, including sensitive combat information control and communications systems. This deal is a chance for Russia to substantially increase its domestic naval construction capabilities. Currently, it is only capable of producing submarines and ships up to the size of frigates. The ability to construct larger and more powerful warships is a skill it would pick up through the Mistral deal. This is a troubling proposition given Russia’s continuous aggressive actions in the region and increasing military displays beyond its borders.

• France’s reputation will suffer. It’s been consistently put forth that France’s reputation as a reliable military supplier will deteriorate if the Mistral contract is canceled. Other nations may fear that France will cancel deals for political reasons or as a result of pressure from allies. This concern, however, is mainly advanced by Russians, Russian news sources, and the French—and not other potential buyers. They likely see Russia’s actions as rather drastic, and France displaying remarkable stubbornness to maintain the deal. Furthermore, preliminary data for France’s 2014 arms exports, despite the contract disagreement, suggests a substantial increase over 2013 sales, from roughly $7.75 billion to $9.5 billion. In fact, France could face a more substantial loss of reputation by fulfilling the deal. It could be seen as an unprincipled business partner and send negative signals to allies and potential buyers opposed to Russian actions.

• France will lose jobs and face repayment and penalties. A big issue for France is the potential loss of jobs and repayment and penalty payments to Russia if the contract is canceled. The deal is worth approximately $1.5 billion, not including possible additional punitive costs for breach. Defense sector employment matters in French domestic politics as an economic bright spot. The French economy is barely growing, unemployment is on the rise, and powerful unions strongly support following through with the contract.

The last point illuminates France’s real problem: finding an alternative buyer and offsetting costs. It has several possible avenues for this. U.S. lawmakers have pressed NATO to purchase or lease the vessels. Russian news has argued that NATO lacks funds, but those are derived from member contributions. Were members, and particularly the United States, to ramp up funding for this purchase, it would be a substantial show of solidarity, consequence for Russia, and limitation on Russia’s military capabilities.

The EU is also a potential destination for the carriers. James Stavridis has proposed a potential “lease to buy” agreement that would bring the ships under common EU ownership. Such an arrangement would boost EU humanitarian and defense capabilities. While even Stavridis admits that such a deal is a long shot, it is possible if European nations commit to punishing Russia, slowing its military buildup, and aiding France.

Another option is to sell to another country. Canada has been offered in this regard. While a Canadian purchase interferes with domestic procurement goals, it need not be a major hit to local industry. The vessels are tailored to be attractive to Canada—Russia insisted they be designed for Arctic operations—but would still require substantial retrofitting before delivery to the Royal Canadian Navy. Such work could be contracted to domestic shipyards. The United States also has a strong interest in this, having long pushed Canada to increase its military capabilities.

Japan, one of the most vocal non-European opponents to the French–Russian deal, is another possible destination. If delivered to Russia, one or both of the carriers would be based at Vladivostok, a worry for Japan. Additionally, Japan has consistently increased defense spending in recent years in response to rising tensions in East and Southeast Asia, and the Mistrals could be part of this. The United States is also keen on Japan taking more responsibility for regional defense. Japan would, however, have to weigh any purchase against involvement in European squabbles and damaged Russian relations.

Ultimately, it is no longer viable for France to sell the Mistrals or any arms to Russia until the latter signals an end to expansionism. France’s lingering plan to deliver military hardware to Russia while decrying Russian military action is the epitome of hypocrisy. While France faces harsh realities in the event of cancellation, it and its allies must firmly and openly agree that the deal must be scrapped and come together to find alternatives.

Andreas Kuersten is legal fellow, National Oceanic and Atmospheric Administration, Office of General Counsel, International Section. Kuersten has also held positions with both the U.S. Navy and Air Force JAG Corps. The views expressed in this article are solely those of the author and do not necessarily represent the views of NOAA or the U.S. government. © 2014 The Whitney and Betty MacMillan Center for International and Area Studies at Yale.