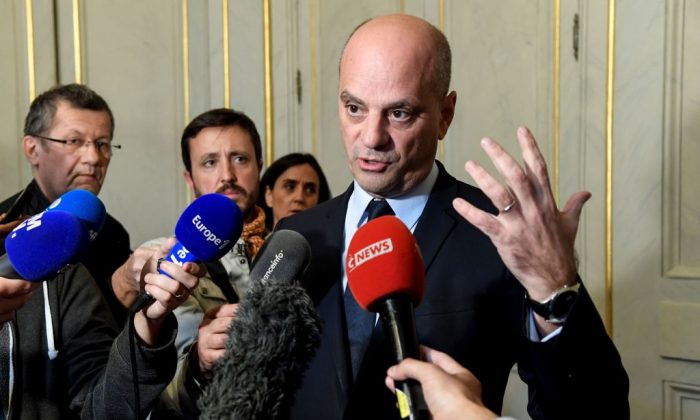 French Education Minister and Youth Affairs Jean-Michel Blanquer addresses media about a video of a teenager in a Paris suburb threatening his teacher with a fake gun at the Ministry of National Education in Paris, on Oct. 21, 2018. (Bertrand Guay/AFP/Getty Images)
Europe

French Teen Who Brandished Fake Gun on Teacher Has Been Charged

A French teen was charged with aggravated violence after a video was released showing him pointing a fake gun at a teacher’s head, prosecutors said on Oct. 21.

The scene took place on Oct. 18 at Edouard-Branly High School in Creteil, a southeastern suburb of Paris.

The 16-year-old says in the video in French, while aiming the fake gun at the female teacher: “You’ve marked me as absent. Mark me as present.”

Le Parisien reported that the teen was reacting to the teacher having marked him as absent when he was late for class.

The teacher appears unperturbed by the disturbing gesture and proceeds to face her laptop, ignoring the student.

There is also a student who is seen in the video making a rude hand gesture behind the teacher’s back.

The video of the incident was first uploaded to social media on Oct. 18 by a high school classmate, according to BBC.

On Oct. 19, the teacher filed a police report over the incident. The teen later turned himself over to police on the same day, accompanied by his father.

The teen told police that it was meant “as a joke,” according to AFP. He was held in police custody for 48 hours before being released with charges that included threatening a teacher and bringing a weapon—even a fake one—to school, France Inter reported.

The student who had made the rude hand gesture was also arrested but soon released.

One teacher who has been at the school for the past 25 years told Le Monde that this incident is not usual and that students are taught “communication skills and respect.”

French President Emmanuel Macron wrote on Oct. 20 in a Twitter post that to threaten a teacher is unacceptable. Macron said he has since ordered his ministers to prevent future similar incidents.

On Oct. 21, Interior Minister Christophe Castaner and Education Minister Jean-Michel Blanquer announced in a joint statement that they would hold a meeting next week to discuss how to prevent school violence in low-income suburbs.