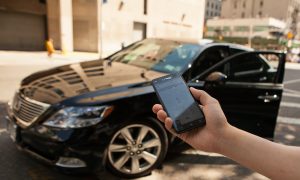 Uber Drivers Will Soon Be Able to Track Your Location… With Your Permission, Thankfully
0
Share Now
TelegramFacebookTweetEmailTellMeWeReddit
Copy Link 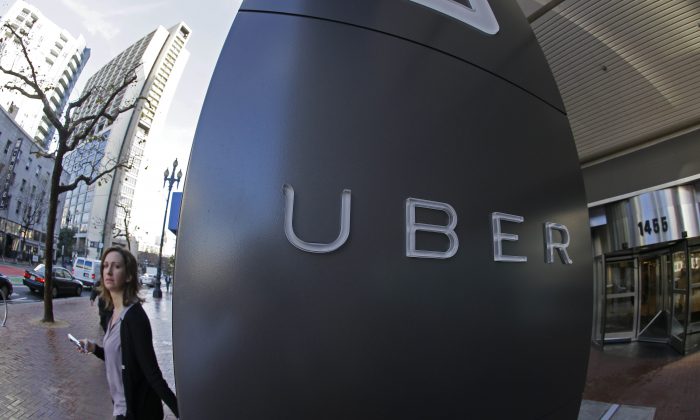 In this Tuesday, Dec. 16, 2014 photo, a woman leaves the headquarters of Uber in San Francisco. (AP Photo/Eric Risberg)
Europe

French Taxis Strike After Weeks of Rising Tension Over Uber

PARIS—French taxis went on a nationwide strike Thursday, snarling traffic in major cities after weeks of rising and sometimes violent tensions over Uber. Travelers hoping to catch a flight walked alongside the highway, rolling their bags behind them, as riot police fired tear gas canisters to hold back some strikers.

Uber’s more expensive livery service is still legal but a source of intense frustration for taxi drivers, who pay tens of thousands of euros (dollars) for their medallions and who face customer complaints that they are being resistant to changes such as credit cards and geolocation.

Will Uber Drive Up Fares in California Due to the New Labor Ruling?

Uber Drivers Will Soon Be Able to Track Your Location… With Your Permission, Thankfully

Taxi drivers complain that Uber unfairly undercuts them and in recent weeks nearly 100 Uber drivers have been attacked, sometimes while carrying customers. In one case, a taxi passenger was left with a broken face and black eye after he praised Uber.

The government, meanwhile, said nearly 500 legal cases have been filed across France involving complaints about UberPop. The officials reiterated concerns about safety of passengers, insisting they are not protected in case of an accident by an UberPop driver.

“The economy is not the law of the jungle,” Claude Bartolone, head of France’s National Assembly, told BFM television.

Strikers darted by the dozens onto Paris’ ring road near a main entrance to the city, then dashed away as riot police tried to catch them. Liberation newspaper’s deputy director, Johan Hufnagel, said taxi drivers attacked one photographer.

Images from around the city captured a sense of the taxis’ rage, with an Uber-style livery car overturned, others with tires slashed and windshields covered with a web of cracks.

At the airports, police were checking entering cars in hopes of avoiding more violence.

Fast-moving technological innovations such as smartphone apps have given the French government headaches when it comes to adapting national laws. And in France, where unemployment rate is in the double-digits — and far higher among young men and unskilled workers — many of the jobless are looking for economic opportunities where they can find them.

Even Interior Ministry officials admit the emergence of Uber and similar services — which can feature perks such as free bottled water for customers and polite, door-opening drivers, not to mention the chance to pay by credit card — have created a competitive market that has forced changes in the taxi industry.

Directly addressing a leading complaint of the taxi drivers — that authorities are not doing enough to apply the new law — the ministry officials emphasized that it will take time to implement the law fully. They said authorities have seized vehicles of UberPop drivers, and pointed to one case in which one driver received a suspended 15-day prison sentence for illegal exercise of a profession.

“This is the first time we’ve had a multinational so cynical that, in every country where it operates, flouts the laws in place and lobbies with an army of lawyers and lobbyists to change the laws to suit its activity,” Metz said.