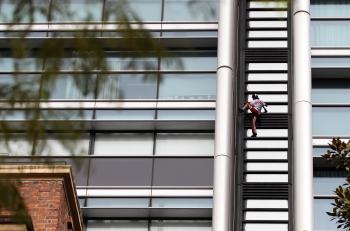 'French Spiderman' Alain Robert climbs 57-storey Lumiere Building on Aug. 30 in Sydney. Robert, who has scaled more than 85 structures around the world, successfully climbed the Lumiere building in 25 minutes. (Craig Golding/Getty Images)
US

Alain Robert is on a mission to raise awareness of global warming and the One Hundred Months campaign which has 2012 as its deadline for Earth to make significant environmental changes.

The 48-year-old stuntman was arrested the minute he reached the top of the sky scraper, while curious onlookers applauded.

Robert uses no safety equipment for his adventures. Last year he was fined $AU750 for illegally climbing the 41-storey Royal Bank of Scotland building in central Sydney.

In June this year he was forced to call off a planned climb of the Deutsche Bank building in Sydney after security guards blocked his access, reports AAP.

In 2003 he was arrested for scaling the Sydney Harbour Bridge. Robert has climbed about 80 buildings around the world.