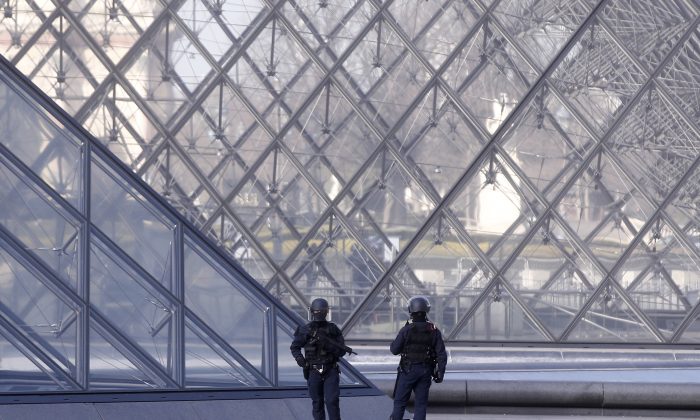 Police officers patrol at the pyramid outside the Louvre museum in Paris,Friday, Feb. 3, 2017. Paris police say a soldier has opened fire outside the Louvre Museum after he was attacked by someone, and the area is being evacuated. (AP Photo/Thibault Camus)
International

French Soldier Shoots Man Who Attacked Them Outside Louvre

PARIS—A French soldier shot and seriously wounded a man in a shopping mall beneath the Louvre Museum on Friday after he tried to attack them and shouted “Allahu akbar,” officials said.

The man was carrying two backpacks, and he had two machetes, and when soldiers and police officers on patrol told the man that he could not come in with his bags, he attacked, said Yves Lefebvre, a police union official.

A soldier opened fire and the man was struck five times, once in the stomach, Paris police chief Michel Cadot said. The backpacks didn’t contain any explosives, he said. One of the soldiers was slightly wounded on the scalp.

The French interior ministry said that anti-terrorism prosecutors are investigating the Louvre attack, but that there were still no details about the identity of the attacker. “Allahu akbar” is the Arabic phrase for “God is great.”

The museum in the center of Paris is one of the French capital’s biggest tourist attractions. Police have sealed off entrances around where the attack took place and closed the area to vehicles, snarling traffic in a busy part of central Paris. The situation is mainly calm, with confused tourists being gently shooed away by officers.

Interior Ministry spokesman Pierre-Henry Brandet said that a second person also was arrested but it is unclear whether they were linked to the attack. Brandet said about 1,000 people were inside the actual museum and were held inside in safe areas.

The French capital has seen a spate of attacks, some claimed by the ISIS terrorist group, since 2015. Friday’s incident created panic.

Olivier Majewski was just leaving his scooter in the parking lot beneath the Louvre when he saw a crush of people, 30 or 40, running and screaming “there’s been a terror attack.” The 53-year-old said he hid for about 15 minutes before gingerly making his way upstairs. He said people were clearly scared.

“They were panicked,” he said.