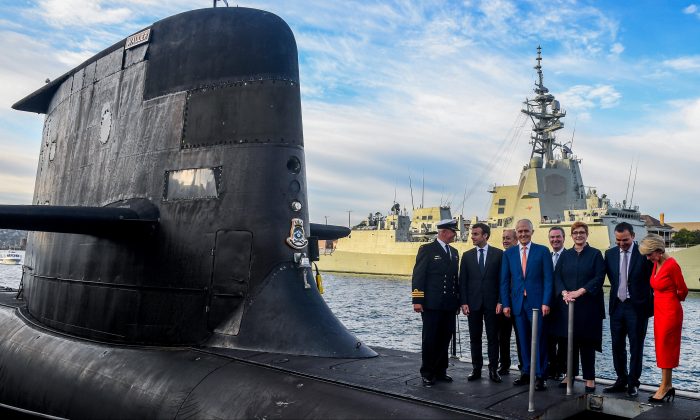 French authorities, although upset at being kept in the dark around AUKUS, shouldn’t be surprised at Australia’s decision to cancel the troubled A$90 billion (US$65 billion) Future Submarines Program—according to a defence expert, who now says it’s time for governments to move forward.

Greg Copley, president of the International Strategic Studies Association, said that the trilateral AUKUS agreement between the United States, Australia, and United Kingdom had to be kept tight-lipped until its unveiling last month—which surprised many.

“The problem was that in order to maintain the secrecy of this new alliance—bound to be controversial—was that it risked the alienation of some other allies, particularly France,” he told Emeritus Professor of Law David Flint in an episode of Australia Calling.

“So, the French were, in a sense, rightly offended and humiliated by the sudden announcement that the Americans or the British would be providing the submarines,” he added, noting that AUKUS meant the cancellation of the Future Submarines Program, which was signed-off in 2016 by former Prime Minister Malcolm Turnbull.

Turnbull’s predecessor, Tony Abbott, had initially wanted to buy off-the-shelf submarines, the Soryu-class from Japan, eschewing the need for Australian industry to build the project.

However, he faced resistance internally from fellow party members who were keen to see the submarines built in Australia (a standard political move to use defence projects as sources of employment).

The pioneering, hybrid project which resulted was riddled with ongoing delays and cost blowouts from original estimates of A$10 billion to A$89.7 billion. Recently, current Prime Minister Scott Morrison—who cancelled the deal—revealed $2.4 billion (US$1.7 billion) had already been sunk into the project before construction had begun.

French ministers have reacted angrily to its cancellation, accusing Australia and the United States of “stabbing it in the back” and recalling its ambassadors from Canberra and Washington D.C.

Trade deal discussions between the European Union and Australia have also been postponed.

“This is absolutely unacceptable in either economic, political, or strategic terms because we don’t know what the strategic environment is going to be like in 20 years’ time,” he added. “And the French persisted in this knowing that this was a great rip-off of Australian taxpayer money for a product which didn’t exist.”

He noted that the French were not solely to blame, as Turnbull, former Defence Minister Christopher Pyne, and top Australian naval officials had supported the program.

“The French should have been busy cutting their wrists as a form of apology for having attempted to steal so much money from Australia,” Copley said.

“But the deed has been done, and now Australia moves into a new era, and so does Britain and the United States.”

The AUKUS pact will not only see the U.S. and UK governments assist Australia with acquiring nuclear-powered submarines—a move that will significantly change the power balance in the Indo-Pacific—it will also spur greater collaboration on development in cyber, artificial intelligence, quantum technologies, and undersea capabilities.

The U.S. and UK militaries will also look at stationing more troops and military forces permanently in Australia.

Copley noted that a nuclear industry was likely to emerge following the acquisition of the submarines but said the discussion around nuclear weaponry was misplaced.

“Nuclear weapons are so 20th century. They have become eclipsed by newer technologies. We don’t need the massive costs, not only of creating but maintaining nuclear weapons when other weapons can do these strategic missions so much more effectively,” he said.

“Those other weapons are largely built around cyber and space-based weapons, and to some degree, kinetic weapons—like hypersonic weapons—where you can use the kinetic impact of non-nuclear weapons to take out key targets. The reality is that very few wars are won by the destruction of mass urban populations.”