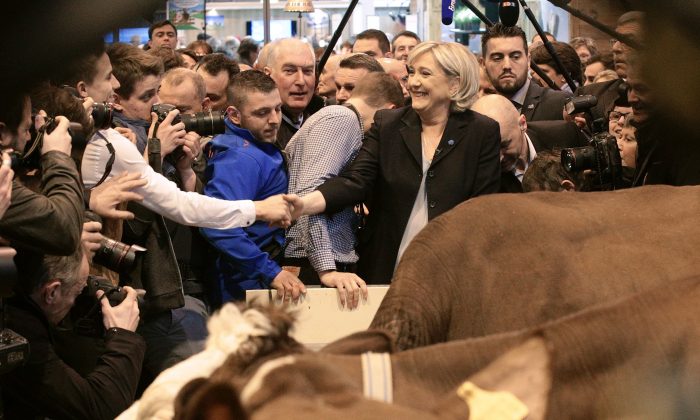 PARIS—French presidential candidates are admiring cows and promising new solutions for farmers who fear their livelihood—and the treasured cuisine and picturesque landscape it represents—is on its last legs.

Would-be presidents are parading through the huge annual Paris agricultural fair this week to promise new solutions for French farms struggling after years of crisis.

Sampling melons and chatting with the fair’s star cow from Brittany, right-wing candidate Marine Le Pen said Tuesday that she wants to “Frenchify” farm aid instead of relying on centralized European Union subsidies. She called for a “national agriculture policy so that we can determine ourselves where this aid goes.”

He noted that French dairy producers export up to 5 billion liters of milk annually to other European countries.

“I simply say to the farmers: think hard. These 5 billion liters of milk that are exported to the European market, where will they go, if we close off, and if we kill Europe? Where will they go?” Le Foll asked.

“The money isn’t arriving at the farms, and we are in a catastrophic situation,” said Laurent Pinatel, spokesman for the Farmers’ Confederation that organized the protest. “The government owes money to farmers … this is not acceptable.”

No French politician has an easy solution for a money-losing sector that relies hugely on EU subsidies but is important to the fabric of French life.

Centrist independent candidate Emmanuel Macron is laying out his farm solutions Tuesday in Gennes-sur-Glaize in western France, then will visit the Paris farm fair on Wednesday.

Conservative candidate Francois Fillon is also expected to visit the farm fair on Wednesday, while Socialist presidential candidate Benoit Hamon is expected to be there Thursday.

Far-left candidate Jean-Luc Melenchon is skipping the event, saying it favors corporate interests. He visited an organic farm north of Paris on Monday instead.

France is holding a two-round presidential election this spring. The top two vote-getters in the first ballot on April 23 will meet in a presidential runoff on May 7.