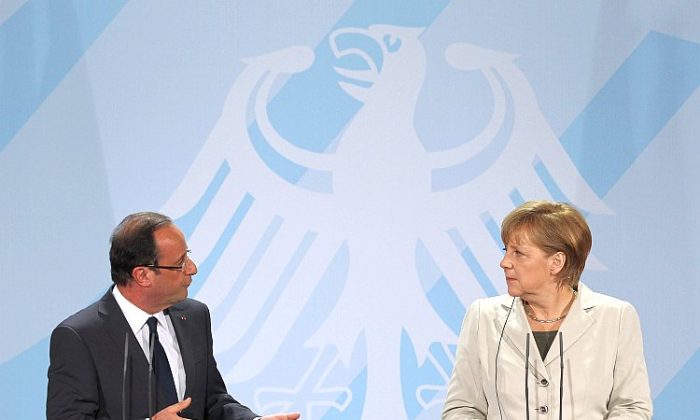 After the G-8 summit on Saturday, Hollande said he would bring the idea of the so-called eurobonds to an informal meeting of European Union heads of state scheduled for Wednesday: “Within this packet of proposals there will be eurobonds and I will not be alone in proposing them. … For that I have received confirmation here at the G-8,” he said, according to the newspaper Hamburger Abendblatt.

It is likely that France will receive support to push for European bonds not only from the European Commission, which has been in favor of them since last summer, but also from the governments of Italy, Spain, and Britain.

Eurobonds, or European bonds, are government bonds that the eurozone would jointly issue and guarantee. Investors would loan money to the 17-member bloc as a whole for a certain shared interest rate, while the money would be forwarded to each government.

France and others are hopeful that such a mutualization of debt across the eurozone would help debt-ridden states bring their finances in order since their borrowing costs were no longer determined by their creditworthiness.

The German government and the majority of Germans are strongly opposed to the idea. The fear in Europe’s strongest economy is that eurobonds will take away any incentive for structural reform or budget discipline.

“Eurobonds at this time signal artificially low interest rates and reduce the pressure for adaption of the European economies,” Steffen Kampeter, a top official in the German Finance Ministry, was quoted as saying in a statement on Monday.

The financial assistance provided by the European bailout fund, the EFSF, over the last two years to states like Ireland, Portugal, and Greece, are dependent on strict reforms within those countries. The austerity measures in those states and elsewhere have created a backlash in many countries, as recent elections show.

Hollande, who won last month’s presidential election on a platform of more growth- oriented policies in Europe and less austerity, is seen as a leading force in building an alliance for European bonds.

Merkel is wary that instead of continuing on the course of fiscal discipline, eurobonds will encourage more debt since every country within the system, whether strong Germany or weak Greece, would pay identical interest on its obligations. By contrast, with nationally issued government bonds, the markets and a state’s credit rating determine the interest paid.

For Berlin, the “solution is more competitiveness in the member states,” according to the government statement on Monday.

While Hollande and others see eurobonds as a first step toward a more integrated fiscal union, for Germany it is the other way round.

“As long as the fiscal policy in Europe is not integrated, the federal government rejects joint financing through eurobonds,” says the statement.

According to Der Spiegel, Merkel does not expect to reach any compromise with the French president before the EU summit at the end of June.

Aside from this fundamental disagreement, France and Germany, considered the drivers of Europe, have shared views on other topics.

At the first meeting between France’s new Finance Minister Pierre Moscovici and German counterpart Wolfgang Schäuble on Monday in Berlin, they expressed a joint desire for Greece to stay in the eurozone.