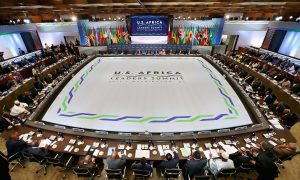 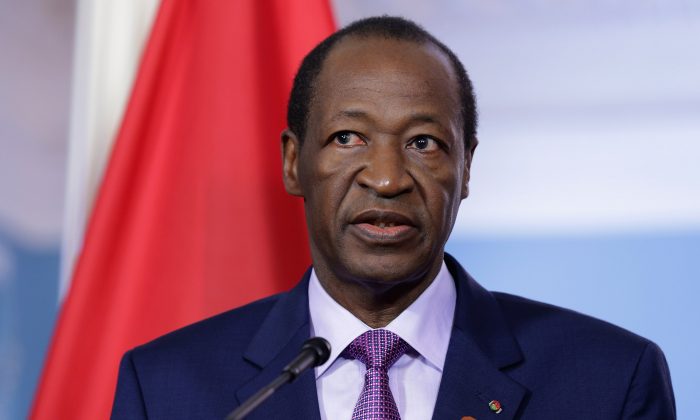 Burkina Faso President Blaise Campaore delivers brief remarks to the news media before a bilateral meeting with US Secretary of State John Kerry during the US-Africa Leaders Summit at the Department of State, in Washington, DC, on Aug. 4, 2014. (Chip Somodevilla/Getty Images)
Africa

DAKAR, Senegal—French President Francois Hollande took to task African leaders who seek ways around term limits to extend their reigns, at a summit Saturday where some such leaders were present.

In a speech to a summit of mostly francophone countries in Senegal, Hollande praised the people of Burkina Faso, whose demonstrations recently ousted their president of nearly 30 years. Blaise Compaore had pushed legislation that would have allowed him to him seek yet another term.

“What the Burkinabe people did should give pause to those who would like to stay in power, in violation of constitutional rule,” he said.

Many African countries have established two-term limits in their constitutions, but their leaders have persisted in finding ways around such restrictions; some have succeeded and many are still considering such moves.

Some of those heads of state were in the audience, like Cameroonian President Paul Biya, who has been in power since 1982. In 2008, he got legislators to remove all term limits from the constitution, despite violent protests, so he could stay beyond the two-term limit.

Also present was President Faure Gnassingbe of Togo, where term limits were removed from the constitution in 2002. Protesters, who want the limits reinstated to prevent Gnassingbe from running for a third term next year, recently clashed with security forces.

Hollande warned leaders who flout their constitutions that the International Organization of the Francophonie — a group of mostly French-speaking countries — would stand on the side of the people and the rule of law.

“Where constitutional rules are flouted, where liberty is trampled, where term limits are thwarted, I promise here that the citizens of those countries will always find support from the Francophonie,” he said.