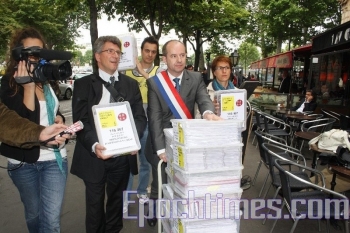 The group of representatives succeeds in passing the warning strip and approaching the Chinese Embassy. A political representative of CFDT Madam Emmanuelle Pirat is seen on the left. (Zhang Le/The Epoch Times)
Europe

By Zhang Le
Print
PARIS—One month before the opening of the Beijing Olympics, the Amnesty International (AI) France and French MP Jean- Jacques Urvoas handed over a petition with 116,467 French people’s signatures to the Chinese Embassy in Paris, requesting the Chinese regime to improve the human rights situation in China.

Those petition also includes signatures from 265 elected officials from various parties. The petition requests improvement in freedom of speech and the release of Chinese citizens Yao Fuxin, Tiananmen mothers, Huang Jingqiu, Bo Dongwei (Falun Gong practitioner), Shi Tao, Hu Jia, Ye Guozhu, and others who have been put in prison, or detained, or house arrested because of their political views or beliefs.

The petition handover is supported by three major French labor unions including the French Democratic Confederation of Labor (CFDT).

Before departure, the president of AI, Genevieve Garrigos, and French MP Urvoas held up a signed letter, posed for pictures, and were interviewed by the media.

The Chinese Communist Party (CCP) set up many barriers for this delivery. When Urvoas, Oberreit, and media came to about 100 meters away from the Chinese Embassy, they were stopped by warning strings set up at a street intersection by the police.

After intense negotiation by Urvoas, the representatives were able to go over the obstruction. Urvoas said he told police, according to French law, elected French officials can tour on French land freely, so the police should provide assistance to them rather than obstructing them. Some members of AI told <i>The Epoch Times</i> that Urvoas called French Ministry of Interior directly, otherwise he might not have been able to get them through. They sighed that the CCP interferes with the French society.

After handing over the petition, Urvoas told the media about the second obstruction set up by the Chinese Embassy: The Embassy was informed of the handover in advance and agreed to send officials to receive the signatures, but at the last moment, it was the “gatekeeper” who received them and claimed that all officials were out.

In the morning of the same day, the AI France and Human Rights Watch had a breakfast press conference in a coffee shop near the Parliament to discuss the human rights situation in China one month before the opening of the Olympic. Human Rights Watch also presented their publication titled Guide which is prepared for the foreign reporters going to China to cover the Olympics.