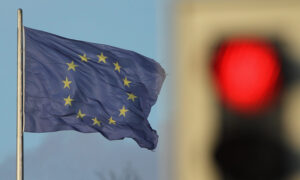 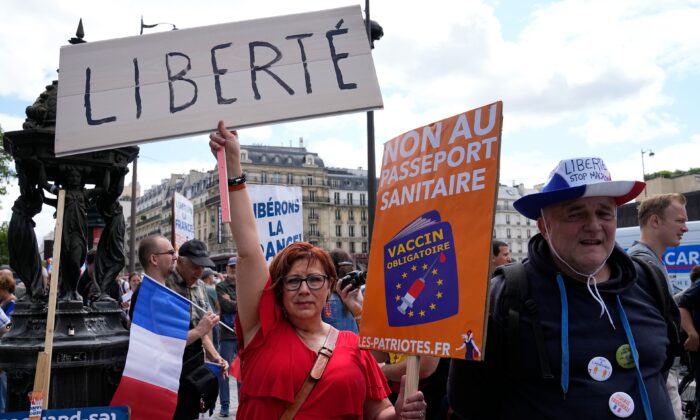 A protestor holds a sign which reads in French "freedom" and "no to the Covid passport" as she attends a demonstration in Paris on July 31, 2021. (Michel Euler /AP Photo)
Europe

PARIS—Thousands in France protesting a special virus pass marched through Paris on Saturday, with French police in full riot gear using their fists to push some demonstrators back and firing tear gas against some crowds.

Some 3,000 security personnel were deployed around the French capital for a third weekend of protests against the pass that will be needed to enter restaurants and other places.

Anti-pass marches were being held in scattered cities across France, and four separate protests were held in Paris.

French lawmakers have passed a bill requiring the pass in most places as of Aug. 9. The pass requires vaccinations or a quick negative test or proof of a recent recovery from COVID-19 and mandates vaccinations for all health care workers by mid-September.

For anti-pass demonstrators, “liberty” was the slogan of the day.

Hager Ameur, a 37-year-old nurse, said she resigned from her job, accusing the government of using a form of “blackmail.”

“I think that we mustn’t be told what to do,” she told The Associated Press, adding that medical workers during the first wave of COVID-19 were quite mistreated. “And now, suddenly we are told that if we don’t get vaccinated it is our fault that people are contaminated. I think it is sickening.”

Tensions flared in front of the famed Moulin Rouge nightclub in northern Paris during what appeared to be the largest demonstration. Lines of police faced down protesters in up-close confrontations during the march. Police used their fists on several occasions.

As marchers headed eastward, police fired tear gas into the crowds, plumes of smoke filling the sky. A male protester was seen in the chaos with a bleeding head.

The government announcement that the health pass would take effect on Aug. 9 after approval by the Constitutional Council has driven many unvaccinated French to sign up for inoculations so their social lives won’t get shut down during the summer holiday season.