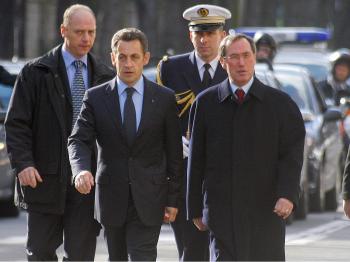 Gueant made his provocative statement on France's popular Europe 1 radio, saying that "scoops are not to be looked for whatever the price." He confirmed that President Sarkozy had been angered by the abduction of the two journalists.

"It is true that Nicolas Sarkozy stated several times that their careless attitude was somewhat to blame, because they had clearly been advised, they had explicitly been asked not to go there because of dangers," said Gueant on the radio show.

The two journalists were conducting an investigation in Afghanistan for France 3 public TV station. On Dec. 29, both were kidnapped 56 miles south of Kabul, and although Taliban insurgents first denied involvement, most analysts think they are behind the incident.

Gueant confirmed the two journalists are still alive, yet said, "Our armed forces face a lot of danger because of them. Additionally, because of this, our soldiers are diverted from their primary mission [in Afghanistan]."

For Aurelie Filipetti, a socialist representative quoted by Europe 1 radio, the "highest state officials here show a complete disrespect for press freedom and insult each and every war journalists."

Jean-François Julliard, secretary-general of Reporters Without Borders, quickly expressed the same opinion. "It is dangerous when such words are said by high-level state representatives," said Julliard.

An even stronger reaction came from Florence Aubenas, a journalist who was taken hostage in Iraq in 2005. "This is insulting for them and their families. I really hope they will not hear this, because that could only drive them into despair," Aubenas said on Public Senat television.

"I'm quite surprised, because until now we had all received instructions to remain low-profile, and not even give the names of the journalists. Everyone did so. I'm quite surprised that these instructions were broken by those who initially gave them. They seized the opportunity that these people are in prison to instruct a public prosecution against them, and this is really unwelcome," said Aubenas

The Society of Journalists for France 3 TV issued a statement strongly condemning Gueant's words, and a petition is currently circulating among French journalists to express discontent.

Minister of Foreign Affairs Bernard Kouchner tried to cool things down by saying he recognized that risk is inherent to the mission of journalists. "Journalism is a dangerous job, especially for investigation journalists, when your interest is in international issues. All due efforts are being done to liberate them," said Kouchner during his new years’ greeting to the press.