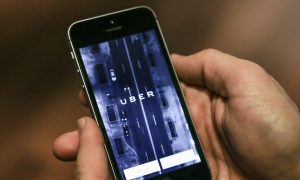 French Interior Minister Says UberPop Must Be Closed Down

PARIS—France’s interior minister, in a bid to halt a day of sometimes violent protests by taxi drivers angered by UberPop, said Thursday, June 25, that the low-cost car service must be shut down. He said orders would be given to seize their vehicles.

Cazeneuve met with taxi union representatives before the announcement in a bid to restore order. He said 70 vehicles were damaged, seven police officers injured, and 10 arrests made on Thursday when 30 legal complaints were filed against UberPop.

Among those caught up in the protests was singer Courtney Love, who tweeted her frustration, saying her ride form the airport was ambushed and she was rescued by two men on a motorcycle.

Cazeneuve said he would meet with UberPop officials to tell them their service “is illegal.”

“It must, therefore, be closed,” he said. “The government will never accept the law of the jungle.”

Taxi drivers said that the U.S. ride-hailing company Uber is stealing their livelihood. Rising tensions exploded into violence on Thursday.

Travelers going to and from the airport walked alongside highways with their bags. With roads blocked, some never made it to the airport.

There are people who are willing to do anything to stop any competition.
— Thomas Meister, spokesman, Uber

“they’ve ambushed our car and are holding our driver hostage,” Love tweeted. “They’re beating the cars with metal bats. this is France?? I’m safer in Baghdad.”

It wasn’t immediately clear what type of car Love was riding in.

Despite repeated rulings against the low-cost UberPop service, its drivers have continued to ply French roads and the American company is actively recruiting drivers and passengers alike. Uber claims to have a total of 400,000 customers a month in France.

Riot police chased strikers from Paris’s ring road, where protesters torched tires in the middle of the roadway and swarmed onto exit ramps at rush hour.

Love, Kurt Cobain’s widow, sent a litany of tweets on Thursday afternoon, including one to Kanye West suggesting she would have been better off staying at the airport with him. West later appeared at the Louis Vuitton menswear show, cool and calm.

She wrote: “paid some guys on motorcycles to sneak us out, got chased by a mob of taxi drivers who threw rocks, passed two police and they did nothing.”

She later posted a selfie wearing a motorcycle helmet with her two smiling rescuers.

Cazeneuve called for calm by all on Friday.

He called a meeting of French anti-fraud officials for Monday to put in place measures to “immediately” stop illegal taxis from servicing customers. Only a decision by the Justice Ministry can ban the App for UberPop, he said.

The minister denounced Uber for failing to respect French fiscal, social, and work laws, and “with arrogance applies none of the rules of law of the republic.”

Uber’s more expensive livery service is still legal but a source of intense frustration for French taxi drivers, who pay tens of thousands of euros for the equivalent of medallions and who face customer complaints that they are being resistant to changes such as credit cards and geolocation.

Taxi drivers complain that livery services like Uber unfairly undercut them and in recent weeks nearly 100 Uber drivers have been attacked, sometimes while carrying customers. One irritated taxi passenger was left with a injured face and black eye after he praised Uber.

The French government said nearly 500 legal cases have been filed across the country involving complaints about UberPop.

“There are people who are willing to do anything to stop any competition,” said Thomas Meister, a spokesman for Uber. “We are only the symptom of a badly organized market.”

The French government, meanwhile, said nearly 500 legal cases have been filed across the country involving complaints about UberPop, the lowest cost service. Several drivers have had their cars impounded. The officials reiterated concerns about safety of passengers, insisting they are not protected in case of an accident by an UberPop driver.

Strikers darted by the dozens onto Paris’s ring road near a main entrance to the city to create traffic chaos, then dashed away as riot police tried to catch them. The Liberation newspaper said taxi drivers attacked a photographer. At the airports, police were checking entering cars in hopes of avoiding more violence.

Fast-moving technological innovations such as smartphone apps have given the French government headaches when it comes to adapting national laws.

Images from around the city captured a sense of the taxis’ rage, with an Uber-style livery car overturned, others with tires slashed and windshields covered with a web of cracks.

Fast-moving technological innovations such as smartphone apps have given the French government headaches when it comes to adapting national laws. And in France, where unemployment rate is in the double-digits—and far higher among young men and unskilled workers—many of the jobless are looking for economic opportunities wherever they can find them.

Even Interior Ministry officials admit the emergence of Uber and similar services—which can feature perks such as free bottled water, polite drivers and the chance to pay by credit card—have created a competitive market that has forced changes in the taxi industry.

“This is the first time we’ve had a multinational so cynical that, in every country where it operates, it flouts the laws in place and lobbies with an army of lawyers and lobbyists to change the laws,” Metz said.