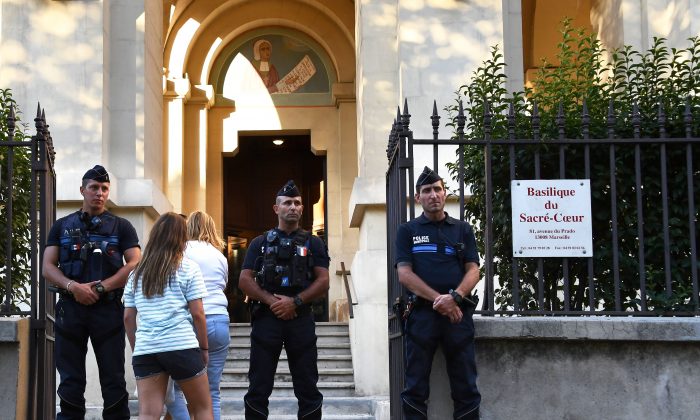 Policemen stand guard as people arrive at Sacre Coeur basilica in Marseille to attend a Mass in tribute to the priest Jacques Hamel, killed on July 26 in a church of Saint Etienne du Rouvray during a hostage-taking claimed by Islamic State group. (ANNE-CHRISTINE POUJOULAT/AFP/Getty Images)
Europe

PARIS—The second man who attacked a Normandy church during a morning Mass this week, slitting the throat of the elderly priest, is a 19-year-old Frenchman from eastern France, the prosecutor’s office said Thursday.

An official in the prosecutor’s office said it was “very probable” that the man, identified as Abdel-Malik Nabil Petit Jean, was the same man pictured in a photo distributed to police services four days before the attack and obtained by The Associated Press. The information accompanying the photo of an unidentified man said the person pictured “could be ready to participate in an attack on national territory.”

UCLAT, an agency that coordinates the anti-terrorist fight, said it obtained the photo from a trusted source.

Petit Jean and another 19-year-old, Adel Kermiche, were killed by police as they left the church Tuesday in Saint-Etienne-du-Rouvray. An elderly man among the five people in the congregation was seriously wounded by knife slashes. One of three nuns present escaped and alerted police.

A man detained after the attack was still being held for questioning, the prosecutor’s office said.

The attack was claimed by the Islamic State group, which released a video Wednesday allegedly showing Kermiche and his accomplice clasping hands and pledging allegiance to the group.

In it, Kermiche identifies himself by the nom de guerre Abu Jaleel al-Hanafi, and says Petit Jean is called Ibn Omar.

The UCLAT flyer to law enforcement said the person in the photo “could already be present in France and act alone or with other individuals. The date, the target and the modus operandi of these actions are for the moment unknown.”

The church attack came less than two weeks after an attack by a man barreling his truck down a pedestrian zone in Nice, on the Riviera, that killed 84 people celebrating France’s national day.

The Islamic State group claimed responsibility for that attack, too, as well as two attacks that followed in Germany.