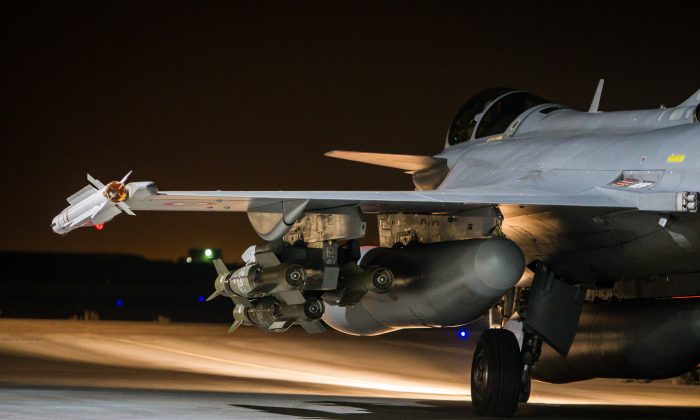 A French army Rafale jet on the tarmac of an undisclosed air base Nov. 17, 2015, as part of France's Operation Chammal launched in September 2015 in support of the U.S.-led coalition against ISIS. (Sebastien Dupont/ECPAD via AP)
Europe

PARIS—French police hunted Tuesday for a second terrorist believed to have escaped after the bomb and gun massacres in Paris, while a U.S. official revealed that the suspected mastermind was part of an Islamic State (ISIS) cell that American intelligence agencies had been tracking for months.

Meanwhile, France and Russia unleashed a new wave of airstrikes against ISIS targets in Syria, while fears of further terror attacks deepened in Paris and beyond. The Eiffel Tower closed to the public just a day after it had reopened and a soccer match between Germany and the Netherlands was canceled due to a bomb threat just 90 minutes before kickoff.

ISIS militants have claimed responsibility for the Friday the 13th attacks that targeted France’s national soccer stadium, a packed concert hall and popular restaurants and cafes in one of Paris’ trendiest neighborhoods, killing 129 people and wounding more than 350.

French authorities had previously said that at least eight people were directly involved in the bloodshed Friday: seven who died in the attacks and one who got away and slipped across the border to Belgium. However, there have been gaps in officials’ public statements, which have never fully disclosed how many attackers took part in the deadly rampage.

On Tuesday, officials told The Associated Press they now believe at least one other attacker was involved and they were working to identify and track down that suspect. Three officials spoke on condition of anonymity because they were not authorized to provide details about the ongoing investigation.

Surveillance video obtained by the AP also indicated that a team of three attackers carried out the shootings at one of the cafes. The video was among evidence authorities used in concluding that at least one other attacker was at large, the French officials indicated.

The brief clip shows two black-clad gunmen with automatic weapons calmly firing on the bar then returning toward a waiting car, whose driver was maneuvering behind them. Authorities believe the car is the same black Spanish-made SEAT vehicle that was found Saturday with three Kalashnikovs inside.

Previously officials had not specified how many people were involved in the attack on a sidewalk bar on La Fontaine au Roi street, as well as the other night spots in the same vicinity.

Investigators have identified 27-year-old Abdelhamid Abaaoud, a Belgian of Moroccan descent, as the chief architect of the attacks. He is believed to be in ISIS-held territory in Syria.

A U.S. official briefed on intelligence matters said Abaaoud was a key figure in an ISIS external operations cell that U.S. intelligence agencies have been tracking for many months.

Analysts have been debating to what extent ISIS was devoting resources to external terrorist attacks, versus seeking to hold onto the territory it has seized in Iraq and Syria. A consensus is now emerging that the group is more focused on exporting terror than had been widely understood.

U.S. intelligence agencies have some insights into who is involved in that effort, said the official, who was not authorized to discuss the matter publicly and spoke on condition of anonymity. But their understanding is hampered by the many challenges of gathering intelligence in Syria, where the CIA does not have a regular presence on the ground.

The chairman of the Senate intelligence committee said Tuesday that it was likely militants plotting the attacks in Syria, Belgium and France used encryption to hide their communications from authorities. Sen. Richard Burr, R-North Carolina, said there was no direct evidence of encryption, but that authorities had concluded it was used because they have uncovered no evidence of conversations among the plotters.

Speaking to reporters after a classified intelligence briefing, Burr also said there is a “strong likelihood” the Paris attacks were directed, rather than just inspired, by ISIS in Syria.

The comments were the strongest public attribution yet by American officials. CIA director John Brennan said Monday the attack bore “the hallmarks of terrorism carried out” by ISIS.

The U.S. Joint Special Operations Command has been carrying out targeted strikes for about a year against senior ISIS militants in Syria, in cooperation with the CIA and other agencies.

On Tuesday, 10 French fighter jets attacked ISIS targets in Syria in a new wave of airstrikes, French Defense Minister Jean-Yves Le Drian said. Speaking on TF1 TV, he said France will have 36 warplanes in the region capable of carrying out airstrikes on ISIS targets once the Charles de Gaulle aircraft carrier reaches the zone.

In Moscow, Russian President Vladimir Putin ordered the missile cruiser Moskva, currently in the Mediterranean, to start cooperating with the French military on operations in Syria. His order came as Russian warplanes fired cruise missiles on militant positions in Syria’s Idlib and Aleppo provinces. ISIS militants have positions in Aleppo province, while the al-Qaida-linked Nusra militant group is in Idlib.

Moscow has vowed to hunt down those responsible for blowing up a Russian passenger plane over Egypt last month, killing 224 people, mostly Russian tourists. ISIS militants have also claimed responsibility for that Oct. 31 attack.

Meanwhile, U.S. Secretary of State John Kerry met with French President Francois Hollande and Foreign Minister Laurent Fabius. Standing next to Hollande at the Elysee Palace on Tuesday, Kerry said the carnage in Paris, along with recent attacks in Egypt, Lebanon and Turkey, made it clear that more pressure must be brought to bear on ISIS extremists.

A cease-fire between Syria’s government and the opposition could be just weeks away, Kerry said, describing it as potentially a “gigantic step” toward deeper international cooperation against ISIS.

France also reached out to its European Union partners for help, invoking a never-before-used treaty article obliging members of the 28-nation bloc to help a member state that is victim to armed aggression on its territory.

Underscoring the tensions in the French capital, the Eiffel Tower shut down again after opening for just a day Monday, and heavily armed troops patrolled the courtyard of the Louvre Museum.

In the German city of Hannover, an exhibition soccer game between Germany and the Netherlands was canceled at the last minute and the stadium evacuated by police because of a bomb threat. Top government officials, including Chancellor Angela Merkel, had been scheduled to attend the game as a sign of defiance following the Paris attacks.

Police chief Volker Kluwe told German public broadcaster NDR that the alleged threat involved the “detonation of explosives in the stadium,” though no explosives had been found Tuesday evening. A second stadium in Hannover was also evacuated shortly before a rock concert was to begin.

French police have questioned dozens of people and conducted more than 100 raids since a state of emergency was declared Saturday. Paris police said they have arrested 16 people, but none were directly linked to the attacks.

Six attackers died after detonating suicide belts and one was killed by police gunfire.

A manhunt is underway for an eighth suspect, Salah Abdeslam, whom French police accidentally permitted to cross into Belgium on Saturday. One of his brothers, Brahim, blew himself up in Paris.

Another brother, Mohamed Abdeslam, was arrested after the attacks but released. In an interview Tuesday with French TV station BFM, he urged his brother to turn himself in.

Two men arrested in Belgium, meanwhile, admitted driving to France to pick up Salah Abdeslam early Saturday, but denied any involvement in the attacks, their lawyers said.

Mohammed Amri, 27, and Hamza Attou, 21, are being held on charges of terrorist murder and conspiracy. Belgian media reported the two were being investigated as potential suppliers of the suicide bombs used in the attacks, since ammonium nitrate, a fertilizer that can be used to make explosives, was discovered in a search of their residence.

Salah and Brahim Abdeslam booked a hotel in the southeastern Paris suburb of Alfortville and rented a house in the northeastern suburb of Bobigny several days before the attacks, a French judicial official told AP, speaking on condition of anonymity because she was not authorized to speak about the ongoing investigation.