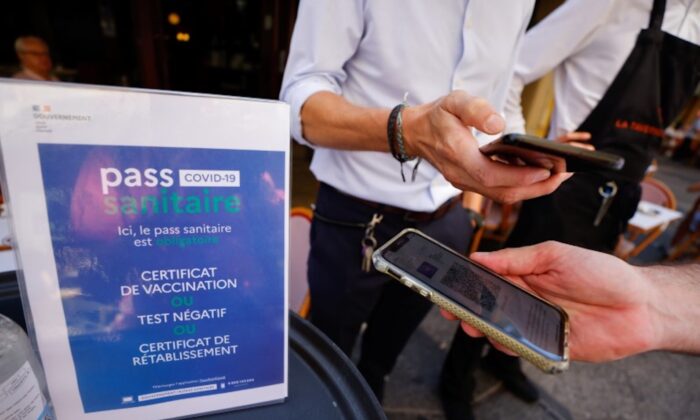 A man shows his COVID-19 health pass at a restaurant as France brings on tougher restrictions required to access most public spaces and to travel by inter-city train, in Nice, France, on Aug. 9, 2021. (Eric Gaillard/Reuters)
WORLD

The French National Assembly has approved a new CCP virus measure that would make it more difficult for those who refuse to get vaccinated against COVID-19 to access “activities in social life” and public transport.

Following days of tumultuous debate, lawmakers in the French parliament’s lower house approved draft legislation, including a measure regarding a stricter vaccine passport, shortly after 5 a.m. local time (11 p.m. ET) on Jan. 6 by a margin of 214–93.

The legislation, backed by President Emmanuel Macron, will go to the Senate early next week before a final vote in the French National Assembly.

French government officials said after the debate pause that the new rules would likely go into effect as initially planned by mid-January. Under the new law, unvaccinated people aged 16 and older will be blocked from hospitality venues and interregional public transport.

If approved, the legislation will remove a current option on the vaccine passport that allows people who are able to show a recent negative COVID-19 test to still enter hospitality venues or to travel by train.

Parliament’s approval of Macron’s plan for enforcing the stricter vaccine passport, which officials believe will help curb the spread of the Omicron coronavirus variant of the CCP virus, comes days after the president drew condemnation from political opponents over controversial comments he made.

Macron told Le Parisien earlier this week that he’s determined to make the lives of those refusing the COVID-19 vaccine so complicated by squeezing them out of public places that they would end up getting vaccinated against the virus.

“I’m not for pissing off the French. … Now the unvaccinated, I really want to piss them off. And so, we’re going to keep doing it, until the end. This is the strategy,” Macron said on Jan. 4.

Macron went on to say that he “won’t send [unvaccinated people] to prison,” but that he’ll make their lives more complicated and encourage people who aren’t vaccinated against COVID-19 to get the shot by “limiting as much as possible their access to activities in social life.”

There has been a lot of reactions to Macron’s comments—both positive and negative. It also comes at a sensitive time, with a presidential election due in April in which he’s expected to run, though he hasn’t yet officially announced if he’ll be running.

Also on Jan. 6, French Prime Minister Jean Castex said France was ready to deploy a fourth COVID-19 vaccination, or a second booster dose, as soon as health authorities gave the green light for such a move.