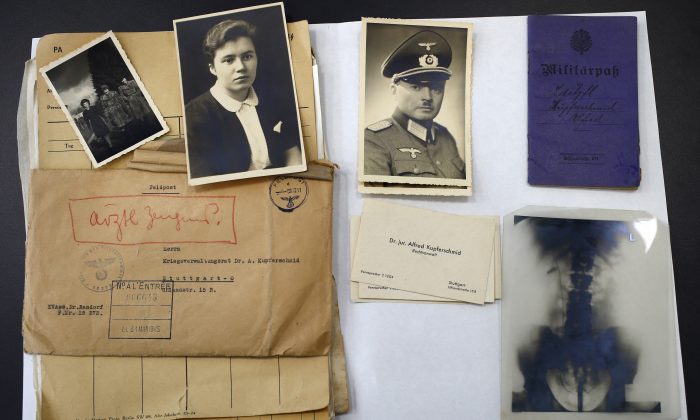 The files of a Nazi German officer, stored for years in the archives rooms of the medieval castle of Vincennes, are displayed in Vincennes, east of Paris, on March 16, 2016. (AP Photo/Francois Mori)
Europe

PARIS—French historians on Wednesday unveiled secret services’ archives from World War II that offer a unique insight into underground operations led by both the Nazis and the French resistance — along with the individual paths taken by thousands of agents, including celebrities like French designer Coco Chanel.

Most of the letters, reports, cables and photos from the rival intelligence agencies of the French Resistance, the collaborationist Vichy regime and the German authorities remain unpublished. The documents, stored for years in the archives at the medieval castle of Vincennes, east of Paris, have not been explored by historians until recently.

They include details of operations led by German spies hunting members of the French resistance, the secret activities of London-based Gen. Charles De Gaulle’s government and efforts to track war criminals.

“A source in Madrid informed us that Madam Chanel was in 1942-43 the mistress and agent of Baron Guenter von Dinklage. Dinklage used to be an attache at the German embassy in 1935. He worked as a propagandist and we suspect him of being a (German) agent,” the document says.

According to Frederic Queguineur, in charge of the secret services’ archives, the file shows that Coco Chanel was documented as an agent by the Nazi intelligence organization, the Abwehr.

“From the German point of view, they registered her, so it means she potentially could be a source of information, fulfill a mission, work for them. But from her point of view, we don’t know if she was really aware of that,” he told the AP.

Following a government decision in 1999, hundreds of boxes were given to the defense ministry’s archives with no classification system — an intelligence technique so no foreign country would get easy access to secret documents. Only half of the archives have now been inventoried.

“We have been captivated by the importance … and the richness of these archives, the feeling, in some way, to find documents that had never been seen for 70 years,” Queguineur said.

Once the archives have been identified, the public can get access to them but as they are not digitized, people need to go to the Chateau de Vincennes.

The secret services’ archives include German documents seized by the French at the end of the war and thousands of individual files of members of the French resistance and investigation files of suspected collaborators.

Historian Thomas Fontaine stressed that history is more complex than a complete division between the ones who resisted and the ones who betrayed, giving the example of a regional Resistance group leader who later served the Germans.

“It’s very clear in the files of the Gestapo that they detain his wife and daughter in order to make him talk,” he said.

“She demonstrates a tremendous devotion, she is totally unselfish. Keen and vibrant spirit, she is able to render us great services,” it said.

Many Resistance members told their stories to the French intelligence services at the end of the war. Historian Sebastien Albertelli is starting research on some 600 women who served in uniform in De Gaulle’s army.

“I can hear their voices, I can let them talk (with these documents),” he said.

The archives also include private documents, such as a moving handwritten letter from De Gaulle’s niece Genevieve to her “dear uncle Charles” in which she seeks advice on the better way to serve in May 1943.

Yet historians noted that some files are incomplete, with some documents having probably been purged to keep some details secret. Those appear to include the file of former French President Francois Mitterrand, who served under the Vichy regime before joining the Resistance.