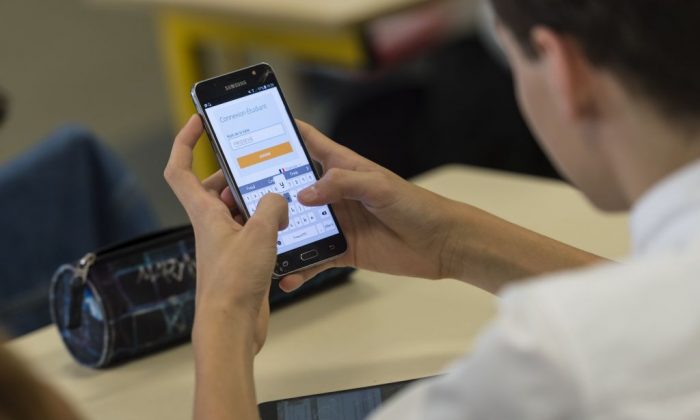 In this photograph taken on Sept. 26, 2017, high school students use smartphones and tablet computers at the vocational school in Bischwiller, eastern France. Since the beginning of the school year in eastern France some 31,000 high school pupils have replaced their traditional textbooks by computers and tablets , a move popular with students but opinion is divided among teachers and parents. (Patrick Hertzog/AFP/Getty Images)
Europe

French Government to Ban Cell Phone Use in Schools

Cell phones are to be completely banned in schools across France, the government has announced.

The blanket ban will start in Sept. 2018, the next school year, said the French education minister. It will apply to children aged 6 to 15 years old in primary, junior and middle schools.

Children will be allowed to take their phones into school, but not allowed to get them out, even during break times, as is currently allowed.

Education minister, Jean-Michel Blanquer announced the decision on RTL.  “Sometimes you need a mobile for teaching reasons… for urgent situations, but their use has to be somehow controlled,” he said.

However, critics are skeptical that such a ban is either helpful or enforceable.

“I don’t understand how it will work. Who will take the phones, where will they put them … how will we get them back?” said one 13-year-old boy outside a Paris school, reported the Guardian.

With some French schools already having independently handled the issue and banned phones, the blanket government ban may be a solution without a problem.

One pupil Mathilde, 12, told the Guardian: “It’s ridiculous. At my school, we don’t use them in class or during recess, so what’s the problem? If anyone’s caught using one in the toilets or at lunchtime, the phones are confiscated immediately and the person is given detention.”

One parent, named Sabine said: “It’s probably a good idea when the kids are in school, but they can’t ban them bringing them to school.”

“But rather than a ban, wouldn’t it be better to install a signal blocker in schools?”

The French headteachers’ union was also skeptical that the ban could be enforced and the minister was not able to explain how the ban would work during his announcement.

“We are currently working on this [ban] and it could work in various ways,” said Blanquer. “Phones may be needed for teaching purposes or in cases of emergency so mobile phones will have to be locked away.”

The minister said the ban was also a “public health message to families.”

“It’s good that children are not too often, or even at all, in front of a screen before the age of seven.”

“This new announcement from the [education] ministry leaves us dubious because we’re having trouble understanding what is the real issue here,” said Philippe Vincent, deputy general secretary of the headteachers union of France, according to the Guardian.

The ban was included in French president Emmanuel Macron’s campaign promises during his successful election bid earlier this year.

The headmistress of a leading British boarding school who banned cell phones and shut down social media access for a three day trial said she is interested to see how the French ban worked out.

Samantha Price told the Evening Standard that her initiative at the £37,000-a-year Benenden School was a success but said a blanket ban may not be a solution.

“It’s unrealistic to take phones away from teenagers,” she said.

“Teens react badly to a blanket ban, so it would be interesting to see how they manage that.”

Ms Price said her school is trying to help teenagers to “self-regulate” their phone usage.  The school prefects will decide how to implement findings from the school’s trial, during which phones were not allowed at all during the day and social media access was blocked.

“Phones are a distraction,” said Price.