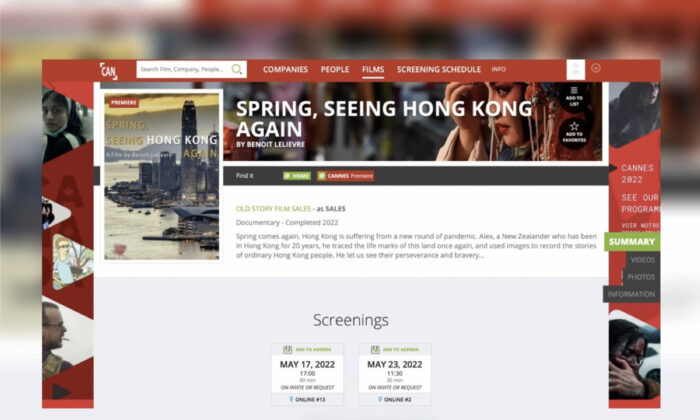 “Spring, Seeing Hong Kong Again," the CCP's "grand external propaganda" documentary, which describes the CCP's assistance in "recovering" Hong Kong from political turmoil and the pandemic of the Wuhan originating COVID-19, was revealed by the "China Media Research Program" of the University of Hong Kong, from the production team to the international response, all are suspected to involve fraud. (GlobeNewsWire)
HK Current Affairs

“Spring, Seeing Hong Kong Again,” the CCP’s grand external propaganda documentary, which describes the CCP “helping Hong Kong” to “recover” from the political turmoil and the pandemic of Wuhan originated COVID-19, was revealed by the China Media Project of the University of Hong Kong, that from the production team to the international response, all are suspected to involve fraud.

Some people believe that the CCP’s publicity does not change the mentality of “blind worship of foreign goods and ideas,” which is more likely to reflect the severe economic situation of the CCP, resulting in the “chaos” of this documentary.

China Media Project published a survey titled “Telling China’s Story, Poorly” by Kevin Schoenmakers, an independent Dutch journalist based in mainland China, mentioned that the 25-minute documentary, claiming that it sparked heated discussions at the 75th Cannes Film Festival in France, and the audience applauded for three minutes after the screening, in a press release issued on June 1.

The press release also said that some viewers said they were stunned, which changed their impression of Hong Kong. And before the Cannes Film Festival, “Spring, See Hong Kong” also won the Best Documentary Award at the Prague Film Festival in the Czech Republic.

BastillePost, a subsidiary of the pro-communist Sing Tao News Group in Hong Kong, published a blog article by Sebastian in June, pointing out that the film “shows the audience a democratic, free, peaceful, tolerant and colorful real Hong Kong.”

The video followed a New Zealander who lived in Hong Kong, telling the “story” of four “ordinary Hongkongers,” including a young actor, securities practitioner, volunteer girl, and devout Catholic, reflecting that performance was affected by the protesters blocking the road during the anti-extradition law amendment bill movement, and the religious freedom in Hong Kong and so on.

Fake Participation in Film Festivals. An investigation by a reporter from the Czech media “Denik N” found that the film “was awarded at the Prague Film Festival” did not exist at all. At that time, only two people bought movie tickets, and its promotional photos were only stock photos.

Wang Jie, the applicant for the screening at that time, was found by Kevin to be the main shareholder and managing director of “Jiangsu Film Projection Culture Company Ltd.,” which had produced at least one propaganda film for a local government in Shaanxi Province, China, the documentary was called “Yang Jia Jiang” (the Generals of the Yang Family).

Kevin’s investigation found that Wang Jie’s company also helped the film to “participate in international competitions,” but most of them were small film festivals that were not well-known, and even the authenticity of the film festivals was questionable.

Further investigation also found that “Spring, See Hong Kong Again” was not shown at the main venue of the Cannes Film Festival, but at the “Marché du Film” (Cannes Film Market Exhibition), which is a platform where people can screen a movie by paying for the exhibition.

The staff list of “Spring, See Hong Kong Again” was investigated by Kevin, but almost no one was found, and no production company was mentioned.

As for the only two consultants of “Spring, See Hong Kong Again” that can be found, Jin Huaqing, pro-Communist director, and Eleni Vlassi, artistic director of the Greek “International Documentary Festival of Ierapetra Awards” (IDFI); the former denied participation of the movie, while the latter has close relationships with mainland China, and he launched the “Chinese Dream” program.

Ask Foreigners to Tell a Story

CCP’s “grand external propaganda” about the situation in Hong Kong is not limited to “Spring, See Hong Kong Again.”

Malcolm said that the scenes he filmed on the streets in 2019 were different from those reported by Western media, and “there was a gap in the information;” he also asked if “all developed countries have similar national security laws,” why only the Hong Kong national security law has been criticized; he believed that compared with the poverty of the mainland China in the 1980s, the living standards, technology, and other things have been “improved in many aspects.” He also mentioned that “one country” is not a threat, but an “opportunity.”

Film critic Ben Lam criticized that although the documentary pretends to be objective and neutral, its pro-CCP stance is obvious. It was only a repackaging of the grand external propaganda, trying to whitewash the CCP and smear the social movement of 2019.

Sam Ng Chi-sum, the senior media person, said on his online program that no one in foreign countries believes the CCP’s “grand external propaganda.”

He is now living in the UK, and said that he met 10 people there, and asked them “if there has been a major incident in Hong Kong recently, is it dangerous, and whether many people have lost their freedom?” All came to the same conclusion.

He believes that the effect of the film on Hongkongers and foreigners is “almost none.” He questioned the use of spending the money, but the film may be able to persuade mainland Chinese who are under information censorship.

He pointed out that the DNA of “blind worship of foreign goods and ideas” has always existed among Chinese, even if they are anti-British and anti-American, they still worship foreigners deep inside, “otherwise, why not look for Chinese, Zhang Yimou (a famous mainland Chinese director) for filming, why should you look for Malcolm Clarke?” Because “the Chinese do not believe in films shot by Chinese,” he questioned whether “grand external propaganda becomes internal propaganda” is useful.

Chu Yin, the mainland international relations scholar, once said in the “China New Narrative Seminar” held by the Center for China and Globalization (CCG) in July that the mainland’s national self-confidence has increased, forming a strange “external propaganda becomes internal propaganda” phenomenon. After a lot of money was spent on the publicity targeting nobody, it is only effective within mainland China.

She also warned that people should not fall into the trap of “external propaganda becomes internal propaganda. In the early days, we believed that fluent English would help (in telling China’s stories). Now, we can speak English fluently, but our foreign fellows in the industry do not understand it at all.”

It was rumored that Chu Yin’s remarks aroused dissatisfaction from the Ministry of Foreign Affairs of the CCP at the time, and Chu Yin received a “warning from high-level officials.”

After that, the CCP seemed to have adjusted its strategy in the Russian-Ukrainian war that broke out in February: within China, it criticized NATO for using Ukraine to fight a proxy war; on the other hand, its stance was seen internationally as ambiguous.

For example, Qin Gang, Chinese ambassador to the United States, said that the CCP will not provide weapons and ammunition to support Russia against Ukraine, and will provide aid to defuse the crisis.

When asked why the CCP cannot publicly condemn the Russian invasion, Qin Gang said that it is naive and useless.

Current affairs commentator Sang Pu criticized “Spring, See Hong Kong Again” on his online program as whitewashing, demagogic, and tampering with history; he thought that “Spring, See Hong Kong Again” was messed up, and he suspected that someone had embezzled the money from “grand external propaganda” and had saved the expense for background actors.

It was analyzed that in the current environment of “pickling leeks” (ordinary people being played for suckers), officials “save as much money as possible for themselves.”

He also said that another possibility is that the CCP is short of money. However, both of them show that the situation of mainland China’s collapse is accelerating, describing that the current economy is only “busted but not yet collapsed;” whether in real estate, capital chain, local debt, and so on. The situation of “involution, lying flat, run” (run overseas for emigration) is critical, and there is a large outflow of funds; foreign capital is also reduced as it is being removed from mainland China.