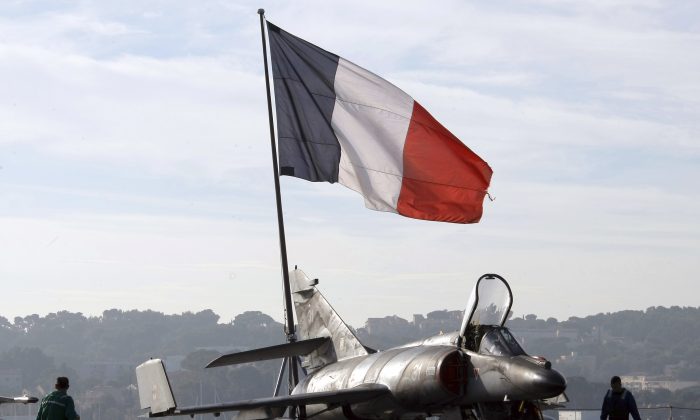 The Charles de Gaulle carrier has 38 military aircraft, which essentially triples the number of French planes in the region. There are 12 French military planes already stationed in the United Arab Emirates and Jordan: Six Mirage 2000 and six Rafale aircraft. The Charles de Gaulle is France’s only aircraft carrier, and it was deployed in the Mediterranean Sea over the weekend to carry out bombing runs.

“The carrier battle group formed around the French aircraft carrier Charles de Gaulle, deployed in the eastern Mediterranean, led his first missions over areas controlled by [ISIS] in Iraq,” said a translated statement from the French Ministry of Defense. “Simultaneously, two patrols carried out two armed reconnaissance missions in support of Iraqi forces engaged in Ramadi and Mosul in Iraq. Both strikes destroyed the targets.”

‘We did them serious damage’

“Frankly, I think we did them serious damage,” Chief of General Staff Pierre de Villiers told the Journal du Dimanche newspaper about the bombing runs. However, he added “there will be no victory … in the short term.”

He added: “Everyone knows that in the end the conflict will be resolved through diplomatic and political means.”

French President Francois Hollande said his country is essentially at “war” with ISIS after the attacks. He then launched a major diplomatic effort with U.S. and Russian officials to coordinate against the terrorist organization.

“Russian bombers taking off from the Khmeimim airbase flew on combat missions to destroy tanker convoys and oil refineries in the areas of oilfields in the north and east of Syria,” Major General Igor Konashenkov, spokesman for the Russian Defense Ministry, told Russian state-funded outlet RT.com. “A major oil depot was destroyed 15 kilometers southwest of the city of Raqqa.”

Meanwhile, Russian Air Force pilots dropping bombs on ISIS fighters in Syria wrote messages on their bombs, with “For Paris” and “For our people.”

The Russian news wire TASS reported that Russian military forces in the Eastern Mediterranean Sea made contact with the French naval group and would coordinate their efforts.