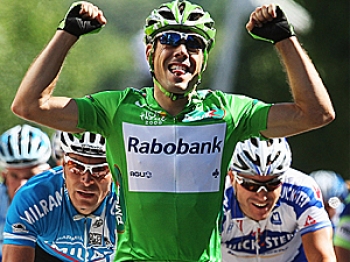 Freire Climbs, Then Sprints, to Win Stage 14 of the Tour

James Fish
alias for Chris J
View profile
Follow
biggersmaller
Print
Team Rabobank sprinter Oscar Freire finally got his chance to shine, as he held on through the climbs to be in at the final sprint in Stage Fourteen of the 2008 Tour de France. In a fast-paced uphill stage where most expected a breakaway to take the win, the big sprinters’ teams decided to take over the stage for their own contest.

The final Cat Four climb knocked out Columbia’s amazing sprinter Mark Cavendish, but the rest of the big guns were there at the end, and Freire had the most in his heart and legs, and took the Stage win.

Long Climb on a Hot Day

Stage Fourteen of the Tour, Nîmes to Digne-les-Bains, was a194.5 miles of climbing. The route started on the plains and climbed in to the Alps, rising steadily if not steeply, gaining 700 meters of the length of the course.

There were only two serious climbs: Cat Fours, neither long or steep. One came in the middle of the route, and the last, longer and steeper, 10 km from the end—a perfect spot to launch a final attack to steal the race.

The final five kilometers sloped very gently downhill and were flat, so any sprinter who could survive the attacks on the climbs would have a good chance—but it seemed unlikely any sprinter could manage that.

The sun was hot, and the sky clear, with only a slight breeze; the temperature hovered around ninety degrees F. The combination of heat, pace, and the final climb hit the field hard. As Garmin Chipotle rider Julian Dean described it, “The last kilometer wasn’t particularly fast; I think everyone was tired.”

On a sad note, Team Barloworld has announced it will withdraw from cycling as soon as the Tour ends, in response to Moises Duenas Nevado getting caught doping. The team’s sponsor decided it was bad for its corporate image, and will shut down the team entirely.

Fast Pace to Chase the Breakaway

The field set out at an extremely fast pace, as has been the norm with this year’s Tour, averaging 48 kph for the first two hours.

The first attack came at the 5 km mark, when a group of twenty-one riders gained a short lead. Most of this greoup was caught up at the 50 km mark, but a breakaway of four remained free: Bram Tankink (Rabobank), Jose Ivan Gutierrez (Caisse D’Epargne), William Bonnet (Credit Agricole), and Sandy Casar (Fraincaise des Jeux).

The peloton was content to keep the break on a short leash, allowing a gap of a few minutes, but never more. The speed over the third hour was 42.5 kph; the big sprinters’ teams were pushing the pace to try to create a group sprint finish, to gain a final advantage before the serious mountain stages that start with Stage Fifteen.

Team Rabobank sprinter Oscar Freire finally got his chance to shine, as he held on through the climbs to be in at the final sprint in Stage Fourteen of the 2008 Tour de France. In a fast-paced uphill stage where most expected a breakaway to take the win, the big sprinters’ teams decided to take over the stage for their own contest.

28 km out, Caisse D’Epargne rider Jose Ivan Gutierrez attacked the breakaway, opening a lead of about a minute heading up to the final climb. However, the peloton was waiting for the climb—as soon as the road tilted up, the peloton took of, and ran down the breakaway with ease. Cavendish fell off the pace when the attacks started.

With 11 km to go, various riders attacked. Thomas Voeckler, Paolo Tirralongo, and Gorka Berredo all took a shot; Sylvain Chavanel made the best effort, attacking at five km and staying away until the final two kilometers. But the sprinters’ teams were relentless.

The Sprinters Take Over

With three km to go, Columbia took the lead in the peloton, leading for Gerald Ciolek. Milram moved up for Erik Zabel. Oscar Freire, riding with no team support, and Julian Dean of Garmin Chipotle, also alone, were in fourth and fifth with one km to go.

Agritubel rider Romain Feillu broke first and opened up a few lengths lead, but Stefan Schumacher rode him down. Then Zabel took off; behind him Oscar Freire cut across from right to left to find a space, and when he found it he accelerated past the other sprinters to be first across the line.

Overall leader Cadel Evans came in 28th, sufficiently well –placed to keep the yellow jersey in the serious Alpine stages, where he knows he will be vigorously challenged by the other riders seeking an overall Tour win.