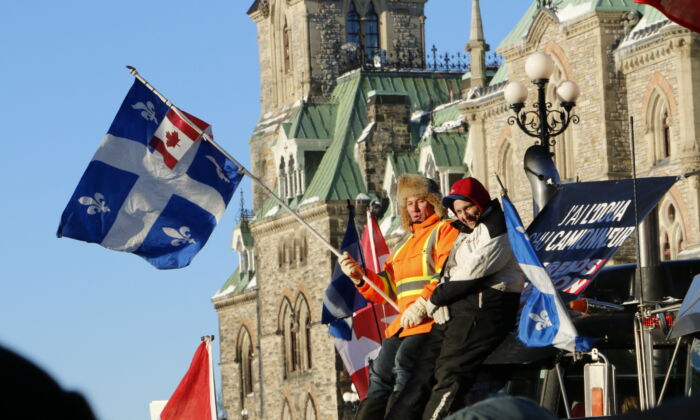 Protesters demanding the lifting of COVID-19 restrictions sit atop a truck in front of Parliament Hill in Ottawa on Feb. 5, 2022. (Noé Chartier/The Epoch Times)
Canada

The directive on how to apply the federal government’s invocation of the Emergencies Act after it ordered financial institutions to freeze Freedom Convoy supporters’ accounts was ill-defined and left credit unions “scrambling,” a Commons committee heard on March 17.

On a few occasions, customers also withdrew millions to avoid the punitive measure.

Martha Durdin, president and CEO of the Canadian Credit Union Association (CCUA), testified before the Standing Committee on Finance as part of its inquiry into the use of the Emergencies Act that suppressed the Freedom Convoy protest movement.

“We were scrambling when the act was announced to find out if we were part of it, if it applied to credit unions, and it took us a little while to be able to get that information from the government,” said Durdin, who noted that the “big six” Canadian banks were given a heads up but credit unions were not.

With credit unions representing almost half of the market in some provinces, Durdin said they should be on equal footing with the federally regulated banks, especially in times of crisis.

On March 14, representatives of cryptocurrency platforms also told the committee on that they experienced a similar situation as credit unions in dealing with uncertainty surrounding the financial applications of the act.

With the lack of clarity initially as to who would be targeted, there was “some degree of panic” among supporters who donated small amounts to the convoy and feared their accounts would be frozen, said Durdin.

This led to withdrawals amounting to hundreds of thousands and on a few occasions even millions of dollars, she said.

“And while these withdrawals did not cause liquidity issues at all for credit unions, staff had to manage many very unhappy members.”

Durdin quoted a credit union leader as saying the measure generated a “large sense of mistrust” toward the government among a large number of credit union members who were “very seriously concerned regarding the government’s ability to seize accounts.”

“The government also granted a significant level of discretion to financial institutions regarding those whose accounts to freeze. This further contributed to confusion, and to possibly an uneven application of the financial components of the measures,” she said.

The Canadian Bankers Association (CBA) revealed during its testimony before the committee on March 7 that its members froze an unspecified small number of accounts outside of the list provided by the RCMP by using a “risk-based approach.”

Durdin said in her understanding credit unions closely followed the RCMP’s list of whose accounts should be frozen, resulting in the freezing of 10 accounts in total with a value of less than half a million dollars.

Testifying before the committee on March 7, the RCMP said they provided financial institutions with a list of 57 entities whose accounts should be frozen, but those entities only included protesters in Ottawa and not donors to the movement at large.

Based on that list, the CBA said it froze 180 accounts.

On the issue of large withdrawals to avoid freezing, the CBA told the committee it had only noticed “anecdotal stories.”

“There isn’t anything of significance, but due in part to misinformation, people thought that if their account was with a bank as opposed to a credit union it would somehow make a difference,” said the CBA’s general counsel and vice-president Angelina Mason.

The Freedom Convoy was a trucker-led movement that evolved into cross-country protests and blockades demanding the lifting of COVID-19 restrictions. It came to an end after the government invoked the Emergencies Act for the first time in Canada’s history on Feb. 14. The act was revoked on Feb. 23 after it was used to remove the only remaining protest in Ottawa.