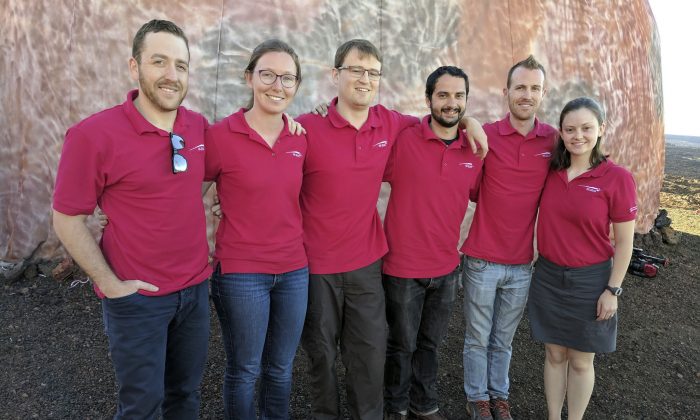 In this photo provided by the University of Hawaii, scientists Joshua Ehrlich, from left, Laura Lark, Sam Payler, Brian Ramos, Jay Bevington and Ansley Barnard, pose for a photo before they enter a geodesic dome called Hawaii Space Exploration Analog and Simulation, or HI-SEAS located 8,200 feet above sea level on Mauna Loa on the island of Hawaii, on Jan. 19, 2017. (University of Hawaii via AP)
Science

HONOLULU—Crammed into a dome with one bathroom, six scientists will spend eight months munching on mostly freeze-dried foods—with a rare treat of Spam—and have only their small sleeping quarters to retreat to for solace.

The simulated stay on Mars with a carefully selected crew of researchers embarked on a mission Thursday to gain insight into the psychological toll a similar real-life voyage would have on astronauts. It’s part of a NASA-funded human-behavior experiment that could help the space agency send humans to the red planet in the next 20 years.

The man-made dome that the four men and two women call home is outfitted with futuristic white walls and an elevated sleeping platform on the world’s largest active volcano in Hawaii. The vinyl-covered shelter spans 1,200 square feet, or about the size of a small, two-bedroom house.

A video released by the group shows the six scientists in matching red polo shirts arriving and entering the dome to farewell handshakes from program associates.

Except for the presence of the white van that brought the group, the scene was reminiscent of the red planet — the dome set in a barren, rock-strewn and reddish landscape with distant hills giving the feel of a windswept and forbidding environment.

They will have no physical contact with people in the outside world and will work with a 20-minute delay in communications with their support crew—the time it would take for an email to reach Earth from Mars.

The project will study the psychological difficulties with living in isolated, confined conditions for an extended period.
NASA hopes to send humans to an asteroid in the 2020s and Mars by the 2030s.

“We’re hoping to figure out how best to select individual astronauts, how to compose a crew and how to support that crew on long-duration space missions,” said principal investigator Kim Binsted, a University of Hawaii science professor.

The team members include engineers, a computer scientist, a doctoral candidate and a biomedical expert. They were selected from 700 applicants subjected to personality tests, background checks and extensive interviews.

“When I started, my biggest fear was that we were going to be that crew that turned out like Biosphere 2, which wasn’t a very pretty picture,” Bevington said.

The experimental greenhouse-like habitat in Arizona became a debacle in the 1990s. It housed different ecosystems and a crew of eight to try to understand what would be needed for humans to live on other planets. The participants were supposed to grow their own food and recycle their air inside the sealed glass space.

But the experiment soon spiraled out of control, with the carbon dioxide level rising dangerously and plants and animals dying.

The crew members grew hungry and squabbled so badly that by the time they emerged two years later, some of them weren’t speaking to each other.

The University of Hawaii operates the dome, called Hawaii Space Exploration Analog and Simulation, or HI-SEAS, and NASA has dedicated more than $2 million to this stage of the project.

Scientists previously lived in the dome for two other long-term NASA-funded stays—one of them lasting a year, the other eight months—to study food requirements and crew cohesion.

A number of other Mars simulation projects exist around the world, but one of the chief advantages of the Hawaii experiment is the rugged, Mars-like landscape, on a rocky, red plain below the summit of the world’s largest active volcano, the Big Island’s Mauna Loa.

The dome has a kitchen, laboratory and bathroom, plus small sleeping quarters for each member. Unlike Biosphere 2, it won’t be airtight.

To maintain the crew’s sense of isolation, bundles of food, including some canned goods and snacks, will be dropped off a distance from the dome, and the team members will send a robot to retrieve them.

The participants will not be confined but will wear spacesuits whenever they step outside for geological expeditions, mapping studies or other tasks.

They will wear instruments measuring their moods and proximity to other team members and use virtual reality devices to simulate familiar and comforting surroundings.