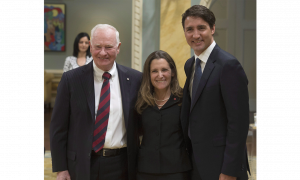 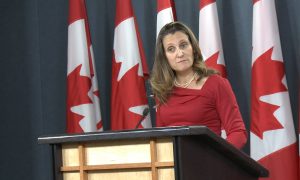 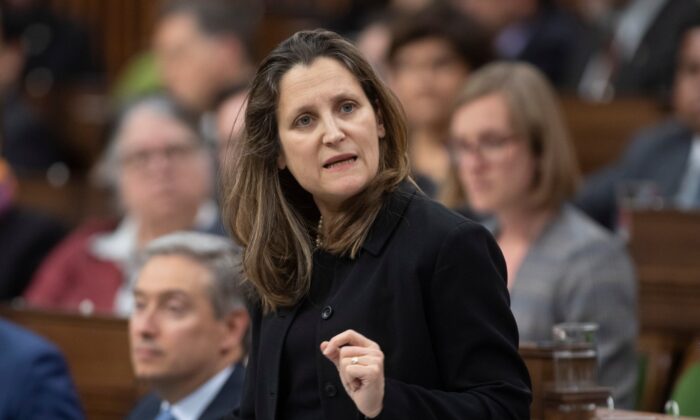 Deputy Prime Minister and Minister of Intergovernmental Affairs Chrystia Freeland responds to a question during Question Period in the House of Commons, in Ottawa on March 9, 2020. (Adrian Wyld/The Canadian Press)
Canada

The news comes less than 24 hours after Bill Morneau announced Monday that he was resigning from his key cabinet role and as an MP.

Prime Minister Justin Trudeau is also looking to prorogue Parliament next month in order to come back with a new speech from the throne and an economic update in October.

Freeland will be Canada’s first female finance minister. She will continue her role as deputy prime minister, though her intergovernmental affairs position could be re-assigned.

The former financial journalist has also served as foreign affairs minister and minister of international trade. She played a key role in negotiating the revamped North American free trade agreement.

Morneau’s sudden resignation on Aug. 17 led to concerns about how the economy would react given the ongoing economic crisis and unprecedented deficits due to COVID-19.

Morneau insisted his decision was based strictly on the fact that he doesn’t intend to run for re-election and his belief that the finance minister must be someone who will be around for the long road to recovery ahead. He said he intends to run to be the next secretary-general of the Organization for Economic Co-operation and Development instead.

His explanation was plausible insofar as Trudeau needs a finance minister who can play a lead role in the next election campaign. That could come at any time, since the Liberals hold only a minority of seats in the House of Commons and it will inevitably revolve around plans for economic recovery from the COVID-19 pandemic.

But it’s unlikely to silence speculation that he was pushed out over disagreements with Trudeau and the ongoing controversy over the government’s choice of WE Charity to administer a student grant program.

Both Trudeau and Morneau have close family ties to the charity and have apologized for not recusing themselves from the decision. And both are under investigation by the federal ethics watchdog for possible breaches of conflict of interest rules.

Morneau compounded the controversy by revealing that WE Charity had paid over $41,000 in expenses for family trips to see its humanitarian projects in Ecuador and Kenya. Morneau repaid the charity just hours before disclosing the trips during testimony before the Commons finance committee last month.

Further damaging revelations could be coming when the committee finally releases thousands of pages of documents the government turned over 10 days ago about the WE affair. The documents are currently being vetted by Parliament’s law clerk to ensure there are no breaches of cabinet confidentiality or personal privacy.