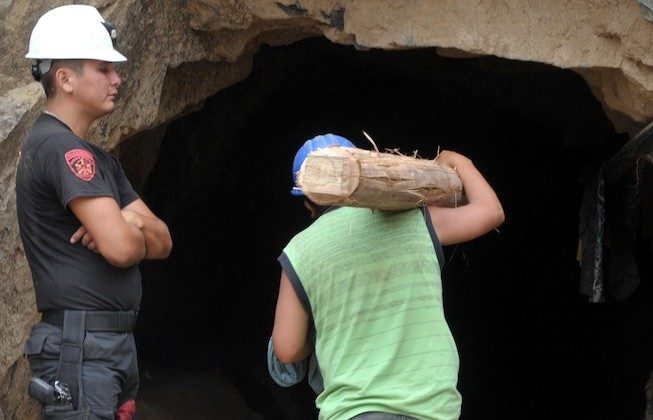 A policeman stands guard as a rescuer carries a timber post to be used as tunnel support during an operation to rescue nine miners at the Cabeza de Negro copper mine, 1,300 meters over the sea level in the Andes, east of Ica, 325 km south of Lima, on April 8 (Cris Bouroncle/AFP/Getty Images)
World

The Peruvian government said on Monday that it will likely take as long as three more days to rescue nine miners trapped inside a tunnel after a landslide, it was reported.

The miners have been trapped in the tunnel since Thursday but are not injured, though some are experiencing considerable anxiety. They have been given oxygen and water through a tube, which has also been used as a communication line.

A new collapse, however, has made it more difficult to get the men out of the Cabeza de Negro mine in southern Peru, the BBC reported.

A small camp that houses the miners’ family members and emergency workers has been set up near the mine over the past several days, the broadcaster said.

The workers have not been able to get heavy equipment for removing debris up to the mine as of yet, it said.

Prime Minister Oscar Valdes, who traveled to the site on Sunday, said that he “communicated with them; they’re well,” as quoted by the Peru This Week publication.

“They only said they are cold from the moisture in that area, but they also recognize that most of Peru is waiting for them and we want to rescue them alive,” he added.

The mine, which is located in the state of Ica is an informal one that was abandoned more than two decades ago but was taken over by unlicensed miners in recent times, the publication said.