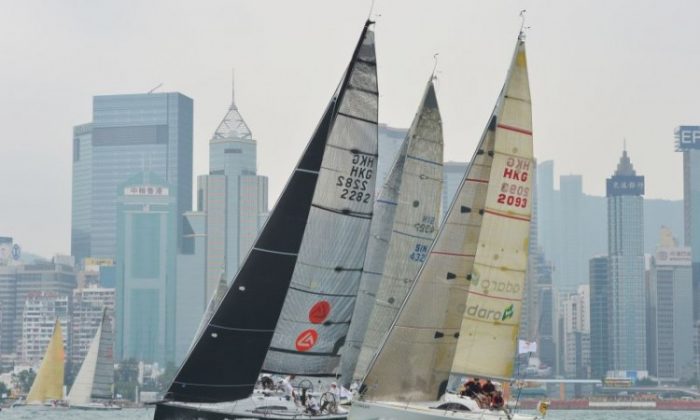 ‘FreeFire’ (left) and ‘Jelik 5’ duel on their way out of Hong Kong’s Victoria Harbour after the start of the Hong Kong to Hainan race last week. (Bill Cox/The Epoch Times)
News

FreeFire smashed the Royal Hong Kong Yacht Club Hong Kong to Hainan race record by 51 minutes last week as she crossed the line 2 hours and 43 minutes ahead of the nearest challenger.

FreeFire, owned and skippered by Mr Sam Chan, took line honours and broke the record by completing the race in 28 hours 43 minutes and 54 seconds—beating the previous best time of 29.35.08 set in 2005 by Mr Chan in a 71′ ULDB sled, also with the name of FreeFire.

Meanwhile, Antipodes crossed the line second, with Jelik 5 less than a minute behind in a very close third.

Twelve boats in four classes set off from Hong Kong’s Victoria Harbour on Thursday Oct 18, en route for Sanya at the south of Hainan Island. IRC Racing boats, categorised in bands according to their IRC rating, were divided into four classes: four boats in IRC Racing-0, five boats in IRC Racing-1, and one boat in IRC Racing-2, IRC Premier Cruising and HKPN. Boats taking part ranged from: Antipodes, a Santa Cruz 72; FreeFire and Jelik 5, both TP52’s; to the medium size 40 Division-1 and Division-2 boats.

Although the Hong Kong haze impaired air clarity, the wind strength was good and they started opposite the RHKYC mark with an eastern heading—into the wind. This would take them the long way around Hong Kong Island and then on a course of their choice for Hainan Island.

All boats did dummy runs to the line to get sailing settings and timing sorted, and at 12.20 pm the start gun sounded—off they went.

All eyes were on the “Big Boats”—FreeFire, Jelik 5, Zanzibar and Antipodes—to see who would win the race out of the harbour.

No less impressive were the Division-1 boats Wicked, EFG Bank Mandrake, Sell Side Dream, Ambush and Avant Garde. Red Kite II, although a smaller craft, is known to be very competitive; while the cruisers Xena and Koon Woon were also cutting a dash.

It was clear early on that FreeFire intended to sail hard, but the Filipino crewed Jelik 5, in particular, was well in contention as they duelled their way out of the harbour, with Antipodes close behind. The leaders out of the harbour were FreeFire, Jelik 5, Antipodes and Zanzibar.

FreeFire was never headed once leaving the harbour; but Antipodes and Jelik 5 were to have a momentous tussle all the way, with just 27 seconds separating them at the finish line.

All IRC Racing Class-0 boats finished in about 30 hours, Classes-1-2 and Xena the Premier Class Cruiser took about 10 hours longer and the rather heavy, steel hulled Koon Woon finished in 53 hours.

Unluckily, Avant Garde had technical problems early on and retired.

Next Event: The Tommy Bahama Around the Island Race takes place on Nov 11.