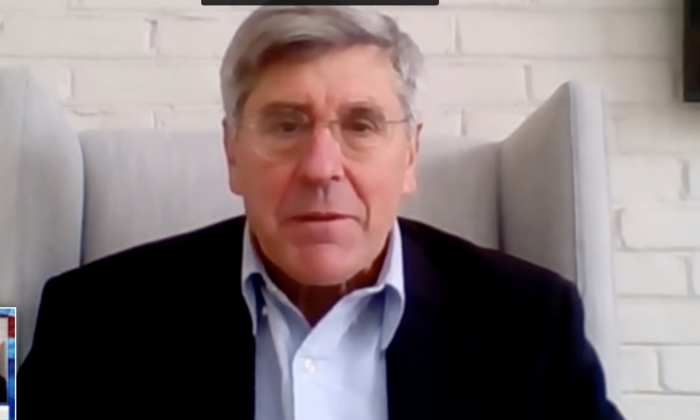 FreedomWorks Senior Economist Disagrees With Biden on Cause of Surging Inflation

Stephen Moore, lead economist at a free-market advocacy group, said large U.S. companies—or what President Joe Biden called monopolies—are not the cause of inflation, but rather uncontrolled federal spending.

Moore told the host of NTD’s “Capitol Report” Steve Lance that there are two main causes of inflation: “One is the Fed, which has been way behind the curve in terms of this zero-interest-rate policy and flooding the economy with cheap dollars. And the second is the massive spending and borrowing multi-trillions of dollars by the Biden administration.”

Meanwhile, Biden said inflation is caused by large companies having a monopoly in the market and that “it’s been happening for a decade.”

“But over time, it has reduced competition; squeezed out small businesses and farmers, ranchers; and increased the price for consumers,” said Biden at a press conference on Dec. 19 at the White House. “We end up with an industry like the meat-processing industry where four big companies dominate the markets.”

But, Moore argued, “If it’s a decade’s old problem, then why is it that for many decades, we’ve had almost no inflation?”

Moore said that Federal Reserve Chairman Jerome Powell should have acted long before now to help alleviate the increasing inflation.

“I think they have to stop buying, purchasing all these assets, which … puts more money in the economy. But more importantly, we have to stop the spending binge in Washington,” said Moore.

“I call it [inflation] the cruelest tax of all because what it does is it shrinks the paychecks of American workers. So let me give you an example. Last year, wages and salaries for workers were up by about 4.5 percent, which is a really good number in normal times—4.5 percent wage growth is really good. The problem is inflation was up 7 percent. So that meant people’s purchasing power with the money they’re making on the job is actually shrinking,” Moore continued.

Biden did acknowledge that inflation is creating a hardship for most Americans, but again pointed to the supply chain issue and the pandemic causing a high demand with not enough supply.

“So, I mean, it [inflation] is a real problem, but the point is, that has to do with the supply chain as well, but it also has to do with the fact that not everybody’s looking for a used automobile, but those who are, they’re paying higher prices because there’s fewer of them because of COVID and what was sold out and the like,” said Biden.

While Biden blames a natural increase in demand, as the pandemic eases, Moore said that the COVID funds the federal government injected into the market in 2021 increased demand with consumers’ spending, making prices rise.

“If you’re somebody living on a fixed income, or an income of $40,000–50,000 a year, that increase in costs is a real hardship for the lowest-income families,” said Moore.