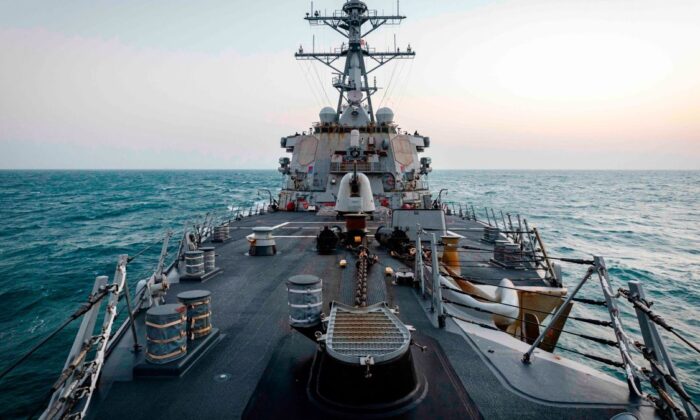 Beijing condemned the United States over the weekend for its supposedly provocative actions. Last week, the U.S. Navy, along with its Canadian allies, moved an Arleigh Burke Class Destroyer in a Freedom of Navigation patrol through the Taiwan Strait, which separates the island from mainland China.

While most of the world is concerned over the Chinese regime’s hypersonic flights, there are important matters happening that speak to a longstanding body of international law that has been codified and adopted by the United States. The Freedom of Navigation patrols seem dangerous and provocative, but they are important deterrents against aggression from the Chinese regime. The commitment to international law is undermined as Beijing’s reaction to those patrols reveals its aggressive and duplicitous rhetoric.

The Freedom of Navigation patrols are a part of international law governing the movement of ships in international waters. The key principle is international and not territorial waters. If Beijing recognized territorial claims, it would require the United States to move a warship under the principle of innocent passage. Thus, the United States declaring and conducting a Freedom of Navigation patrol rejects the Chinese regime’s claims of one country.

This has some danger. After all, we might be upset if the Chinese operated warships off of America’s coast—though foreign warships do sometimes operate in or near American waters under the principle of innocent passage. But the comparison breaks down because the United States is not militantly building up islands in contested territory, nor claiming the territory of another nation and threatening to absorb that territory. So the Chinese regime’s protests are not legitimate.

The benefits are far greater than the drawbacks. International law is often seen as a weak farce, particularly when powerful nations flout the concept. But it has important application in the South China Sea and Taiwan. Upholding international law helps to provide normal standards of conduct that avoid warfare. It allows ships to move on the high seas, and ships to move through territorial waters when they need to. It provides a forum for territorial disputes. And there are many disputes in the South China Sea where there are multiple overlapping claims between nations.

Reasserting international law in the face of Chinese complaints is incredibly important because of the regime’s behavior. The World Court, another international body that helps prevent conflict, ruled against China’s claims in the South China Sea. Beijing continues to thumb its nose at the decision, and placed even more weapons systems and missiles on the disputed islands, even though it was ruled as part of the Philippines’ exclusive economic zone (EEZ).

Immediately after losing the court case, the Chinese regime used its new advanced weapons systems in the East China Sea. Near the disputed Senkaku Islands, it practiced locating and sinking a ship as an obvious message to Japan, which approved of the World Court’s ruling. The Chinese regime draws boundaries, particularly in the South China Sea, that supports its own claims. It seeks to regulate the rights of foreign vessels in its EEZ, which would give it de facto control over much of the region and deny America’s movements. Beijing has sent over 800 planes into Taiwan’s air defense identification zone.

The Chinese regime has illegally built-up islands and placed advanced radar systems, anti-air batteries, and shipping docks that can handle blue water ships, submarine bases, and large runways that can support its advanced fighters (that are being built using stolen technology from the F-22 and F-35). Keep in mind that the regime is doing this in the Spratlys and other islands in the South China Sea that are vigorously disputed. It’s true that other nations have done so as well, but not to the extent that China has and not with the same degree of militarization.

Thus, the U.S. reaction of sending a warship through these islands is one of the most basic steps it could do to deter Chinese aggression. The Arleigh Burke class destroyer was an especially good pick, as it has the advanced Aegis radar systems to track and destroyer missile swarms that China is attempting to develop.

International waters is not the most exciting topic in the world, but it is incredibly important in understanding the tools for restraining the aggression of the Chinese regime. Freedom of Navigation patrols ensure that territorial claims are not unilaterally claimed by the biggest bully in the region. Furthermore, the patrols send a message to allies: The United States cares about restraining that bully by doing something as simple as sailing in international waters and saying so.