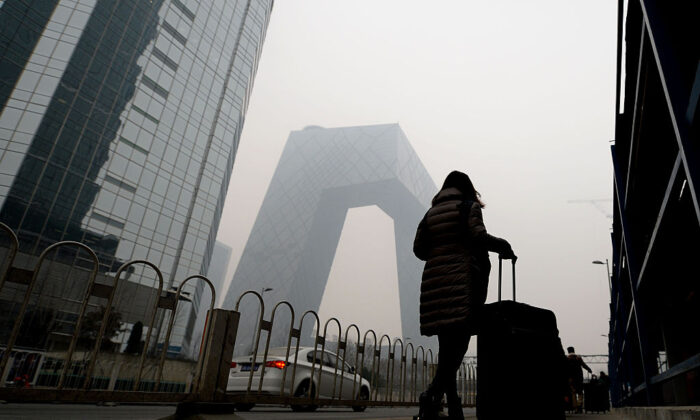 A woman walks past the new CCTV tower amid heavy smog in Beijing on Dec. 8, 2015. (STR/AFP via Getty Images)
By Cathy He

For years, China has pushed its narratives and propaganda through media outside of its borders. Since 2017, these Chinese influence campaigns have been accelerated with new tactics, according to a just-released report by the U.S.-based nonprofit Freedom House.

“Journalists, news consumers, and advertisers in countries ranging from Sweden to Russia, South Africa, the United States, and Australia are encountering intimidation or censorship of political content that the CCP [Chinese Communist Party] considers undesirable,” stated Sarah Cook, Freedom House’s senior research analyst and author of the report, in a press release.

In a phone interview with The Epoch Times, Cook explained that Beijing has three goals behind their influence campaigns: promoting a positive image of China and the CCP; promoting China’s openness to economic engagement, especially Chinese investment in other countries; and suppressing viewpoints and coverage of topics that is critical of the CCP.

Cook added that Beijing added a new goal in 2017: presenting China as a model for political-economic development for developing countries.

Beijing’s messaging, while intentionally portraying China in a positive light, “omits the objective negative dimensions of China’s authoritarian political system and rapid economic development,” according to the report.

Examples of such omission include egregious human rights violations against ethnic and religious minorities, and the dark side of China’s foreign engagement, such as corrupt deal-making and the opaque accumulation of public debt, according to the report.

Beijing has been accused of putting developing countries in a “debt trap,” after these countries join China’s massive investment initiative of “One Belt, One Road” (OBOR, also known as Belt and Road). Rolled out in 2013, it aims to build up trade routes linking China, Southeast Asia, Africa, Europe, and Latin America.

Cook told The Epoch Times that Beijing has resorted to “covert, corrupt, and coercive” tactics in pushing forward its narrative abroad.

One example that illustrated the covert element of Chinese media influence: Chinese state media often used misleading taglines. For example, the Chinese Communist Party’s official mouthpiece People’s Daily has the tagline of “the biggest newspaper in China” on its Facebook page.

Cook explained that people who don’t know much about China may not necessarily know that these are CCP mouthpieces.

In Western countries, the regime is spending millions to insert its propaganda into mainstream media outlets, Cook said. China Daily, overseen by the CCP’s Publicity Department, the agency in charge of disseminating propaganda, has partnerships with many Western newspapers, including The Wall Street Journal, The New York Times, and The Washington Post in the United States. These publications have published supplements in print or online written by the English-language state-run newspaper.

Federal filings by China Daily show the outlet’s annual spending has increased tenfold during the last decade to more than $10 million in the past few years, Cook noted, adding that “a lot of that [expenditure] is actually paying mainstream American media to carry that content.”

In addition, “China’s state-run media [are] injecting disinformation into global social media platforms,” Cook stated. The reported identified disinformation efforts during the most recent presidential election in Taiwan that were traced back to China, including Facebook groups supporting a pro-Beijing candidate that were run by China-based users, as well as efforts on Twitter to undermine pro-democracy protesters in Hong Kong.

China is also active in the digital television broadcasting sector, with investments throughout Asia, Africa, and Latin America. For instance, Chinese telecom giant ZTE signed a deal with state-owned Pakistan Television Corporation (PTV) to expand the latter’s digital services in 2017.

Searching for the keyword “Taiwan” on PTV’s website reveals no coverage on the most recent Taiwan elections, nor Taiwan’s local elections in 2018. It did, however, report on Taiwan’s 2016 election, when Tsai Ing-wen won her first term in office, but that was before the ZTE deal.

Searching “Taiwan” in Urdu,  one of the languages spoken in Pakistan, does reveal stories on Tsai’s recent re-election victory.

A search of the keyword “Xinjiang” revealed only seven articles, none of them about China’s imprisonment of Uyghur Muslims there.

The third tactic, coercion, manifests through the bullying of journalists, such as in Russia and Sweden.

According to the report, the Chinese embassy in Sweden issued at least 52 statements targeting specific journalists and news outlets, criticizing their coverage while peppering them with insults and threats, between January 2018 to February 2019.

The report also pointed to the case of an arson attack against the Hong Kong edition of The Epoch Times’ printing press on Nov. 22 last year. The attack is widely believed to be an effort by the CCP to silence The Epoch Times, which has reported extensively on the protests in Hong Kong and the CCP’s human rights abuses.

Cook warned that as a form of censorship, the Chinese regime has also displaced independent media with its state-run media, as evident by a case in Papua New Guinea in 2018.

According to media reports, Chinese officials prevented local and international journalists from covering Chinese leader Xi Jinping’s meeting with eight regional leaders in the South Pacific island nation that year. These officials then told the reporters that they should use Xinhua’s (state-run news agency) reporting or CCTV’s video as the basis for their coverage.

Cook said countries could do more to push back against the regime’s aggressive influence campaign, including imposing penalties on Chinese diplomats and tightening broadcast regulations.

“When Chinese diplomats and security agents overstep their bounds and attempt to interfere with media reporting in other countries, the host government should vigorously protest,” the report said, recommending that such officials could be expelled or barred re-entering the country.

Currently, only CGTN and China Daily are registered, and while state-run news agency Xinhua was ordered to register by the DOJ, it has not yet done so.

Cook said there is also a “plethora” of privately-owned Chinese-language media in the United States that are “clearly pro-Beijing,” which require more scrutiny and consideration about whether they should register under FARA.

Media investors and governments should also support independent Chinese-language media outlets, such as through funding and training.

“Governments should proactively engage with such outlets, providing interviews and exploring other potential partnerships, while resisting pressure from Chinese diplomats to marginalize them,” the report said.