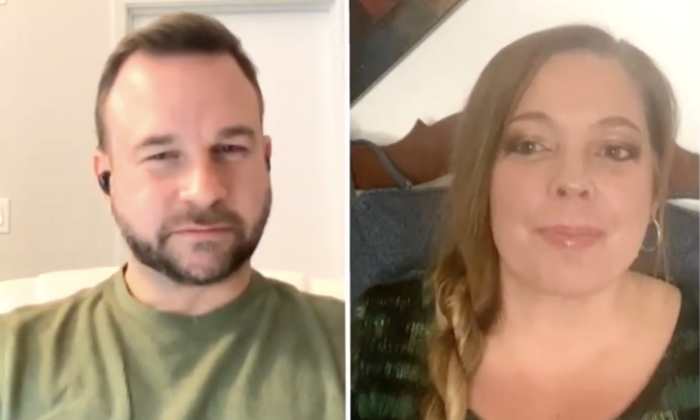 The coordinator of the Canadian Freedom Convoy 2022, Benjamin Dichter, and one of the organizers behind the U.S. trucker Convoy to Save America, Denby Melisha Morgan, said they have been overwhelmed by people’s support for their efforts to end mandates and restore personal liberties.

“The response has been amazing and overwhelming, and something I never would have thought I would experience in Canada, the amount of support and unity amongst people,” Dichter told Cindy Drukier, the host of NTD’s The Nation Speaks, on Feb. 5.

The truckers are demanding an end to vaccine mandates and the passport phone application being required by the Canadian government. Thousands of truckers from Canada converged on the Ottawa Capitol on Jan. 29 and on Feb. 6, the mayor declared a state of emergency.

Dichter said participants of the convoy have mostly gotten the support of local police because of their upright and orderly conduct.

“And after a few days and talking with police on the ground, it seems to be that strategy worked, because they understand that this is a peaceful, family-oriented event where people can bring their kids,” said Dichter.

In Dichter’s estimation, there have been about 40 to 50,000 people in attendance over the weekends, which he said is even more amazing when you remember it is minus 30 degrees Celsius (-22 Fahrenheit) in Ottawa.

“Still, people didn’t care because they’ve been locked up in their homes for a couple of years,” Dichter said. “They just came here just to be free, doesn’t matter that it was arctic temperatures, they finally didn’t have a government breathing down [their] neck with its boot on them.”

The truckers’ protest was started by Canadian truckers but rural Canadians have also come out in great numbers to support freedom from mandates.

“Justin Trudeau basically turned Alberta into a third-world country, it’s quite scary when you go there to rural parts of Alberta. So they have had their lives destroyed. Their businesses were crushed. Suicide rates are through the roof,” said Dichter, adding that it started before the COVID mandates.

The convoy was able to raise over $10 million Canadian ($8 million USD) before being shut down by the owners of the GoFundMe website.

Meanwhile in the United States, Denby Melisha Morgan, a mother of seven, said she was inspired by the Canadian convoy and their demands to end the mandates.

“I don’t know, it just touched my heart. And I was like, I’m gonna contact the organizers of the main convoy and see how we can help on this side,” said Morgan.

She had the idea that the U.S. truckers could extend the convoy to stand in solidarity with the Canadians and protest the mandates in the U.S. by taking the trucks to Washington D.C.

Morgan has also been overwhelmed by the support for the truckers by a broad segment of her community.

“Then I had tons of people like ‘yes, yes!’ So, I put the hashtag #convoytoDC” and then started reaching out to people and organizing, said Morgan. “I have just been overwhelmed at the number of people that are like ‘let’s go!’ … the Canadian flag the American flag combined together, it’s everywhere.”

Dichter said people have made their voices heard by giving money to the convoy in support of freedom.

Canadian prime minister Justin Trudeau and the Canadian mainstream media have tried to slander the convoy participants and label them a fringe minority.

Dichter said the claims made by Trudeau are false and the strategy to insult them and call them names will not work.

“Because every strategy that the Trudeau government has tried or Trudeau has tried, which is one strategy, and it’s the same strategy over and over again of calling people names, even his own base of support is starting to get a little turned off on it,” said Dichter.