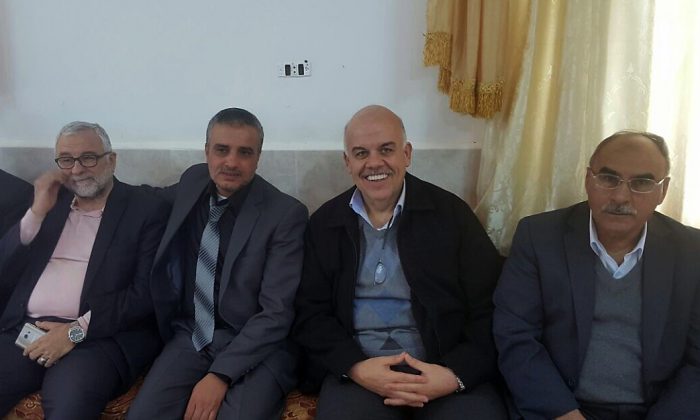 Ahmed Daqamseh, second left, is seen with friends and relatives after his release from prison in Ibdir, Jordan on March 12, 2017. (AP Photo/Omar Akour)
International

IBDIR, Jordan—A Jordanian soldier who killed seven Israeli schoolgirls in a 1997 shooting rampage was unrepentant after his release from prison Sunday, lashing out at Israelis with harshly derogatory remarks.

Ahmed Daqamseh, who had spent 20 years in prison, was given a rousing welcome in his home village in northern Jordan after his release. He was greeted by chanting supporters who kissed him on the cheek and raised a photo of him with the caption, “Welcome to the hero Daqamseh.”

Daqamseh opened fire on a group of Israeli students at the scenic “Island of Peace” border post in March 1997, killing seven and wounding seven.

A Jordanian military court deemed Daqamseh mentally unstable and sentenced him to life in prison, rather than imposing the death penalty. Jordan had announced several days ago that Daqamseh would be released this week, after completing his term. In Jordan, life terms are not open-ended, and prisoners can be released after 20 years.

Upon arriving in his hometown, Daqamseh expressed no regrets, telling a reporter that Israelis are “human garbage.”

Israel and Jordan cooperate closely on security matters, including in the battle against Islamic extremism, even if their 1994 peace treaty remains widely unpopular in Jordan where many residents have Palestinian roots.

Yisrael Fatihi, whose 13-year-old daughter Sivan was killed in the attack, told Israel Radio on Sunday that he had been informed by the Israeli embassy in Jordan last week that Daqamseh’s release was imminent.

“It is unfortunate, but this is the situation,” Fatihi said.

After the shooting, Jordan’s King Hussein—the late father of the current king, Abdullah II—rushed to Israel and paid condolence visits to the girls’ families, a gesture that touched many Israelis at the time.

Fatihi recalled Hussein’s condolence visit, saying he and his family had been sitting on the floor in mourning at the time and that the monarch knelt down next to them. “We told him we really appreciated his visit,” Fatihi said.

Nurit, his wife, told The Associated Press her daughter was a “very happy” child who “took everything easily.” She said she misses “her laughter, her smile, her joy of life.”

“Despite the murder we are for peace,” she said.

Daqamseh was released from prison before dawn Sunday.

By Sunday afternoon, he was receiving well-wishers in his clan’s meeting hall in the village of Ibdir, about 120 kilometers (75 miles) north of the capital of Amman.

Jordanian security forces set up checkpoints along the access road to the village, preventing journalists from entering with cameras.

In comments broadcast on the Al Jazeera satellite TV channel, Daqamseh appeared to be unrepentant. He said that those who criticized him for killing young girls were “hired pens” and admonished them to “fear God.”

Standing in a street dressed in a suit and tie, he said, “Palestine needs every single Arab and Muslim.”

Asked by the Al Jazeera reporter about a purported Israeli plot to kill him, Daqamseh said: “They (Israelis) are human garbage that other peoples got rid of by dumping them in Palestine, the most sacred place after Mecca.”

“This garbage should be burned or buried,” he added. “This will happen, if not in our generation, then in other generations.”

In a videotaped statement posted online, Daqamseh urged Jordanians not to believe what he called “the lie of normalization with Israel” and the idea of a two-state solution to the Israeli-Palestinian conflict.

Keren Ofri Mizrachi, one of the girls Daqamseh shot and wounded in the attack, said his release from prison is a difficult day for her.

She told Israel’s Channel 10 TV how he shot her four times from close range while she was trying to escape the carnage. Her twin sister was also shot and wounded in the attack.

“I saw the look of murder in his eyes,” she said, adding that his release had brought memories flooding back. It feels like being “wounded again.”

“I have chosen to live. I won’t allow anybody or anything in the world break me. I am strong, I am a proud Jew. I have a family and children, they are my strength,” she said.