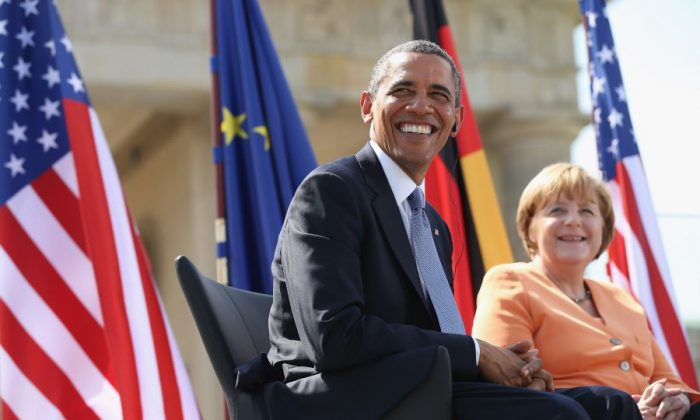 Free Trade Agreement Could Create One Million US Jobs

President Barack Obama and Germany’s Chancellor Angela Merkel affirmed again on June 19 in Berlin that free trade talks between the United States and the European Union will officially start in July. One study suggests the United States might add 1 million jobs if markets are completely liberalized.

“This topic, the free trade agreement, which is of great importance for us in Germany and Europe, could be a great project between the two largest economies in the world,” Merkel told reporters.

Obama, visiting Germany after the G-8 summit in Northern Ireland said: “We agree that there is more work to do. Not only do we have to grow but we also have to reform our economies structurally.”

In a previous statement released at the G-8 summit, the President of the European Commission Jose Manuel Barroso had officially given the go ahead for negotiations to start in Washington in July.

One study suggests that economic gains from completely removing trade barriers could be huge, especially for the United States, which would likely not only benefit from a reduction in tariffs and quotas, but even more so by the removal implicit barriers, such as certain regulatory standards.

The study commissioned by German media company Bertelsmann and conducted by the Munich-based Ifo Institute for Economic Research concludes that the United States would be the main beneficiary of completely free trade. It estimates a job gain of 1,086,000 and real per capita GDP growth of 13.4 percent, but only if all explicit and implicit barriers are removed.

For U.S.–EU trade, quotas and tariffs are already quite low, averaging between 5 and 7 percent. But differences in regulatory standards, for example, cost companies a fortune, costs that are ultimately passed on to consumers.

“Non-tariff barriers do not result in income distribution; they rather cause economic costs. In order to prepare goods for foreign markets, bureaucratic, regulatory and administrative rules have to be adhered to. This leads to delays, increasing market risk [for the company]. These costs are associated with the consumption of resources but do not … benefit the consumer. Even very small non-tariff barriers reduce the purchasing power and real income of the consumer,” the report states.

If consumers have more money, they can spend more, therefore boosting economic activity and jobs.

An example of a nontariff barrier would be different safety standards for manufactured goods, such as cars or airplanes. In order to meet standards in two different economic zones, a company would have to conduct several expensive testing and certification processes and might even have to modify its production process.

The 27 members of the EU would also benefit. Real income per capita would increase by 5 percent on average, creating 1.3 million jobs. The U.K., Germany, and Spain would benefit the most from job gains in Europe. The study used econometric models and simulations to make the predictions, not taking into account how much time would elapse before the changes take effect.

Optimistic estimates look for a completion of the talks by 2014, but the process might well take longer. It is also pretty certain that an ultimate agreement won’t include the complete liberalization modeled in the study.

France, for example, has insisted on adding in clauses to protect some of its vital industries. The study states that France will benefit the least of the big countries. Still, it would hypothetically add 122,000 jobs and 2.6 percent in real per capita GDP.

Apart from the agricultural sector, which is heavily regulated and subsidized on both sides of the Atlantic, France wants to add an exception for European film, radio, and TV, as it fears complete Hollywood domination.

Despite the potential gains, doubts linger. “Anyone who thinks this will be an immediate kick start to growth is mistaken,” Jeffrey Schott, an analyst at the Peterson Institute for International Economics in Washington, told The Associated Press.

“The trade agreement alone won’t be a magic bullet to propel economic growth if it is not undertaken in conjunction with domestic economic reforms,” said Schott.

In addition, the United States and the EU’s gains will be at somebody else’s expense. Since free trade makes goods cheaper to import from each other, the two economic blocks will be less reliant on other economies, like China, India, Russia, and South Africa. The study estimates that U.S. trade with these nations would fall almost 30 percent.

Growth in nonmember countries would likely fall and they would shed hundreds of thousands of jobs, but the final tally worldwide would still be a gain of 3.3 percent for real per capita world income and about 2 million jobs.

Going beyond economic simulations and large numbers that are hard to grasp, what is the impact on the average consumer?

Americans, for example, might spend less on shoes. According to the BBC, only 1 percent of the shoes Americans wear are actually produced in the United States. The rest are imported, with tariffs up to 66 percent courtesy of the Tariff Act of 1930.

“From the importer to the distributor to the retailer, that price is marked up to create profit margins,” Matt Priest, president of the Footwear Distributors and Retailers of America (FDRA) told the BBC.

Europeans on the other hand will be less reliant on natural gas supplies from Russia, which provides roughly a quarter of European gas. This could be supplemented or replaced by cheaper U.S. shale gas, though transportation via ship would be more expensive than the already-established Eurasian pipeline system.

Until now, the Natural Gas Act of 1938 stipulates that gas exports must be approved by the U.S. Department of Energy. Free trade partners, such as Canada and Mexico, however, receive special treatment that could soon benefit EU member states.

“It would also help the European economy and go some way to weaning it off Russian gas. So there are huge geo-strategic reasons for the U.S. to tie its allies to itself through energy exports,” Bruce Stokes, a nonresident fellow at the German Marshall Fund of the United States told the BBC.

A free trade zone comprising the world’s two largest economic blocks will bring about winners and losers. It also remains to be seen how much of their vital interests both parties are willing to give up. One thing is certain, however. The potential of complete trade liberalization between the United States and the EU is enormous. It is up to both sides how much of that potential they are willing to capture.