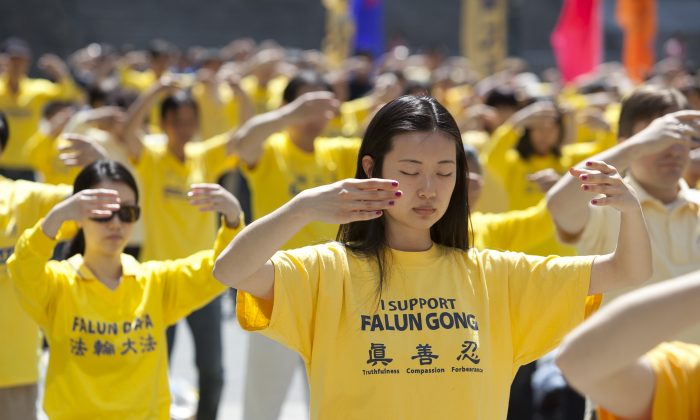 Falun Dafa practitioners in Lower Manhattan’s Foley Square demonstrating the gentle Falun Dafa exercises on May 12. Practitioners gathered in honor of World Falun Dafa Day, which falls on May 13 and marks the day the spiritual practice based on truthfulness, compassion and tolerance was introduced to the public in China. (Samira Bouaou/The Epoch Times)
China

NEW YORK—They come from all corners of the world, and from all walks of life. On May 17 close to 8,000 practitioners of Falun Dafa will arrive in New York City for a conference and a weekend of events.

Falun Dafa, also known as Falun Gong, is an ancient Chinese self-cultivation practice. An estimated 100 million people began practicing Falun Dafa in China between 1992 and 1999, due to the health benefits of the meditation and exercises, and its emphasis on improving a person’s character according to truthfulness, compassion, and tolerance.

“There is an old saying in Chinese that if you have something good, it’s selfish to keep it as your own,” said Ms. Yi Rong, chair of the Global Service Center for Quitting the Chinese Communist Party.

On Friday and during the weekend, Yi will be helping organize the annual Experience Sharing Conference, group meditations in Dag Hammarskjold Park and Central Park, as well as efforts to tell people about the Chinese regime’s persecution against Falun Dafa.

“Many people in Western society have a chance to know, because of the free media, that there is persecution against this group,” she said. “But even people in a free country, they might know what’s going on, but they might not know what this practice is about—why there is a persecution, why people practice, or why people keep practicing even when facing such brutal persecution.”

She said the practice and values of Falun Dafa have deep roots in traditional Chinese culture.

“China is a country with a profound tradition and value system,” Yi said. “Our first emperor, the Yellow Emperor, was a Daoist, and his teacher was very famous in Chinese history, Guang Chengzi. There are lots of wonderful stories about him.”

She said the Daoist teachings Chengzi passed down to the Yellow Emperor included the code for how the emperor ruled. “So Chinese have this foundation to believe there are requirements for human beings—to keep harmony between human beings with heaven, with nature, and keep harmonious relationships with each other.”

This spiritual foundation was sustained in China’s culture through 5,000 years of history, “and there are a lot of great practices passed down that teach people to improve spiritually and physically,” Yi said. “Chinese really believe that the human body can transcend while practicing the spiritual and physical exercises.”

She said the spiritual foundation of Chinese people was the springboard that helped make Falun Dafa as popular as it was China. “When Falun Gong came out, a lot of Chinese people who knew their history well, who are really keen on such traditional practices, immediately realized this is one of the high level, complete systems of practice,” Yi said. “Because in the past, many practices were only half passed down, with the physical or spiritual teachings. But Falun Dafa was passing down a complete system of spiritual perfection and physical refinement.”

On July 20, 1999, the then-Chairman of the Chinese Communist Party Jiang Zemin, gave orders to, in his own words, “eradicate” Falun Gong. He set in motion a persecution campaign that includes the torture, rape, and harvesting of organs of Falun Gong practitioners. A 2006 study from the United Nations Special Rapporteur on Torture estimated 66 percent of the Chinese regime’s alleged torture victims are Falun Dafa practitioners.

Prior to the persecution, Chinese people would often practice Falun Dafa in parks before going to work, following the tradition of Tai Chi and other qigong practices. Yet, facing the persecution and the propaganda of the Chinese regime, many Falun Dafa practitioners in China and around the world also took it on themselves to peacefully clarify what Falun Dafa is, and to reach out for international support.

The practice has endured in China—and flourished outside China—even while being targeted for destruction by the Chinese Communist Party (CCP) for the past 14 years. Practitioners also started an effort to get Chinese people to withdraw from the CCP and its affiliated organizations.

Yi has a master’s degree in public administration from Harvard University’s Kennedy School of Government, and is a former Chinese diplomat.

Yi will be coordinating many of the events this weekend, including a daylong effort at the United Nations headquarters in Manhattan to explain what Falun Dafa is, and expose the persecution against the practice in China. Practitioners will also have a Wall of Truth and will be holding banners from 47th Street to 42nd Street on 2nd and 3rd avenues. A silent vigil will also be held in front of the Chinese Consulate.

Yi said an event will also be held to commemorate the 138 million Chinese who have withdrawn from the CCP and its affiliated organizations.

A Falun Dafa parade will also be held in Chinatown. “I believe the parade will be large scale for Falun Gong,” Yi said. “About 8,000 people will participate.”

“Before the persecution in China, Falun Gong became well known in China. It’s very popular because of its healing effects,” Yi said. “It’s the largest spiritual group in China.”

During 14 years of persecution, the true number of practitioners who have been killed by the CCP is unknown, and virtually impossible to obtain, due to the regime’s methods. However, two independent studies estimate that 30,000 to 65,000 or more Falun Dafa practitioners were killed for their organs, and these totals certainly represent only a fraction of all those killed by the various means used by the regime.

“I think the international community hasn’t paid enough attention to this severe human rights issue in China,” Yi said. “The CCP tries to cover it up, and tries to label Falun Gong as an anti-China organization.”

“So for practitioners, only outside of China are they free to talk to people about the truth of Falun Gong. Because New York is an international community, it is like the image of the whole world,” she said. “I think it’s one of the best places to call for the international community to help, and to let more people know about the truth about Falun Dafa and about what’s going on in China, and to stop the severe persecution against Falun Dafa in China.”

Speakers will include people who have been tortured or faced other forms of persecution. Yi said one woman who will speak at a rally escaped from one of the CCP’s most notorious forced labor camps—Masanjia. One woman who will speak was among the many female Falun Dafa practitioners who were thrown into a male prison cell by Chinese police.

She said the reason Falun Dafa practitioners are persecuted to such a degree is that the practice strives to embrace Chinese values that the CCP has sought to destroy. “The CCP tries to eradicate and destroy the Chinese traditions and values,” she said. “The communist government took the power, and cannot represent China, cannot represent Chinese people.”