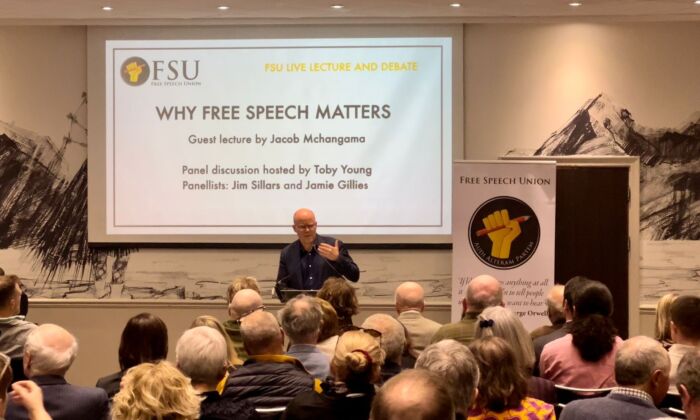 Facing what some call an “unbelievably authoritarian country,” a free speech watchdog has set up a Scottish office to deal with numerous claims that new laws and extreme, progressive policies are threatening and weaponising free speech.

The Free Speech Union (FSU), which supports self-styled defenders of free expression in England, has launched a Scottish office after overwhelming demand from its members who are concerned that free speech is in peril.

In the past few years, authorities have convicted a Scottish comedian for telling a bad joke, the University of Edinburgh has renamed a tower commemorating the father of the Scottish Enlightenment and 18th-century philosopher David Hume over his “racist” views, and a famous author has had to retrain as a truck driver because she backed JK Rowling’s views on gender.

Set up by the British journalist Toby Young in 2020, who was himself “cancelled” by an “outrage mob” in 2018, resulting in the loss of five positions, said his worry is that “we won’t be able to employ people quickly enough in Scotland to cope with all the demand.”

But the FSU said it was particularly concerned about the “chilling” effect of the Hate Crime and Public Order (Scotland) Act once it is activated, which the Scottish National Party (SNP) argues would modernise and consolidate hate crime law.

Former law student Lisa Keogh found herself in the middle of a widely reported free speech storm when she was investigated by Abertay University, Dundee, because she stated during a gender feminism seminar that “women have vaginas,” “the difference in the physical strength of men versus women is a fact,” and “not all men are rapists.”

Keogh, a mother of two boys, was subject to multiple investigations which saw her eventually cleared of misconduct charges owing to support from SNP MP Joanna Cherry QC and the Free Speech Union. Writing in the New Statesman, Cherry said that she herself was subjected to an “18-month campaign” of abuse because of her belief that “women are adult human females.”

In a statement at the time, Abertay University wrote that for “the avoidance of doubt, the University does not and will not constrain lawful freedom of speech within the University community.”

“I didn’t realise Scotland was woke until what happened to me,” said Keogh, who is currently suing the university for the stress caused by the incident. “When I did, and you look down the rabbit hole you see how bad things are. If I would have read my own article, I wouldn’t have believed it,” she said.

Keogh said that she is currently campaigning to be an Alba Party councillor. On Monday, the Times of London reported that the party’s leader Alex Salmond accused trans activist students of cancelling him at an event at Aberdeen University over Alba’s opposition to the Gender Recognition Act. Salmond had to make a speech beside a car park.

Summing up how people feel in Scotland and why they may not speak out, Keogh said: “People are so scared to go against the grain because of the repercussions. Your average person just can’t state fact, because your average person has a mortgage to pay or their rent to pay, children’s clubs, and electricity bills etc. All the stuff that comes with having a real life is easier for them to keep their head down,” she said.

“The reason there’s less free speech in Scotland than England is that the state is more powerful in Scotland and that state is effectively run by the SNP, which has little tolerance for dissent,” said Young in an email to The Epoch Times.

“People employed in the public sector, or by a charity or arts company that’s dependent on state funding, are afraid to challenge politically correct dogma for fear of losing their jobs. Hopefully, the presence of the Free Speech Union in Scotland will embolden them to speak out,” he added.

In an FSU statement, Jenny Lindsay said: “In nearly 20 years of programming and writing in Scottish literary culture, I have never known an atmosphere so stifled, nor the precepts of freedom of expression so disregarded by individual writers and arts organisations alike.”

Laws already exist to punish crimes aggravated by prejudice, but the SNP’s bill, introduced by the Scottish health secretary Humza Yousaf, has been criticised for institutionalising discrimination with the offence of “stirring up hatred.”

But some say planned “stirring up hatred” offences are too broad and risk criminalising speech that is merely felt to be offensive to certain people. The bill, which became law in April last year, has not come into force yet.

“The campaign group Free to Disagree has done a great job of highlighting the threat that the Hate Crime and Public Order (Scotland) Act poses to free speech. I think that’s one of the reasons the Scottish government hasn’t activated the Act yet. It’s on the statute books and has received Royal Assent, but it’s just lying there, dormant,” said Young.

“One of the things is a precedent that has been set with this law is that for example, if you say something that is defined as hateful in your own home, then you can get arrested for that, at a dinner party, or if someone is walking past your house and they hear you commenting and so on. That’s totally new, we’ve never had it before,” criminologist Stuart Waiton told The Epoch Times.

He said that one major shift is that institutions could be taken to court. This means that newspapers, universities, plays, playwrights, and actors could face legal action if they are deemed to be deliberately stoking up prejudice.

“It’s one of the worst bills in Europe, censorious and authoritarian,” said Waiton.

Waiton said that Scotland’s old factions such as liberalism and conservatism now have little sway over contemporary politics.

“All of those traditions had an idea of human subjectivity,” he said. “Each of them accepted that a person had a certain amount of strength, responsibility, and capacity to do something. Today the modern elite work on a principle of diminished responsibility. Those past political traditions had an expectation of human freedom, whereas the modern elites think that they need to keep people safe,” he said.

He called it a form of “neo-authoritarianism,” which is different from the kind of authoritarianism detailed in George Orwell’s “1984,” which was exemplified by the quote, “If you want a picture of the future, imagine a boot stamping on a human face—forever.”

“This ‘neo-authoritarianism’ says ‘we need to protect as you are vulnerable.’ The more you think that people are vulnerable, the more it means they are vulnerable to something and someone, so you need more protections, laws, policing, and regulations. It’s a really destructive authoritarian framework, but it doesn’t appear to be, it appears to be fair and enlightened,” added Waiton.

A government spokesman told The Epoch Times that “these criticisms are misplaced—the Scottish Government wholeheartedly supports freedom of speech.”

“There is nothing in the Act that would prevent people expressing any controversial, challenging, or offensive views, nor does it seek to stifle criticism or rigorous debate in any way. As an additional safeguard, the Act includes provisions on freedom of expression to provide reassurance that the prohibition on stirring up hatred based on characteristics such as religion or age will not unduly limit people’s rights to freedom of expression,” he said.

The government did not say why it had not activated the Act yet. But added that it “is important that the Act is implemented effectively so that it offers robust protections to victims of hate crime. We are continuing to work closely with justice partners to agree a suitable commencement date.”