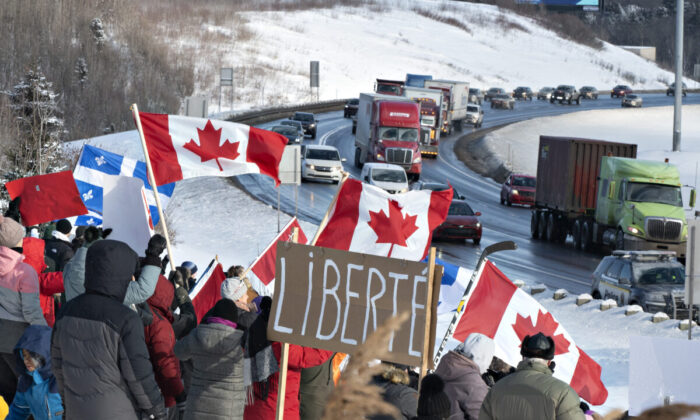 Hundreds of people gather by TransCanada Highway 20 to show their support to truckers heading to Ottawa to protest against COVID-19 restrictions, in Levis, Quebec, on Jan. 28, 2022. (Jacques Boissinot/The Canadian Press)
Canada

Canadians are becoming increasingly concerned about the issues of free speech and freedom, a new poll finds.

Conducted by Nanos Research, the poll found that of all national issues of concern, free speech and freedom came in second as the “most important” to Canadians at 8.3 percent, just behind the coronavirus at 13.1 percent, and of higher priority than the environment at 7.5 percent.

With the latest numbers released on March 15, the ongoing survey has tracked Canadians’ top concerns every week since its launch in Jan. 2020.

Nik Nanos, chief data scientist and founder of Nanos Research, said the concerns surrounding freedom are likely tied to the truckers’ protest against COVID-19 mandates and restrictions earlier this year.

“I’ve been polling now, wow, I think it’s been for 35 years and, unprompted, freedom and free speech has not really been on the agenda or on the radar from a public opinion perspective,” he said on CTV News’ Trend Line on March 16.

“But it looks like for a noticeable proportion of Canadians, unprompted, it’s on their minds as to the one thing that they’re worried about.”

The large convoy of trucks, dubbed the Freedom Convoy, arrived in Ottawa on Jan. 29 to stage a protest against federal COVID-19 vaccine mandates for truckers travelling between Canada and the United States. It turned into a larger movement after many Canadians from across the country began joining in or voicing their support for ending various COVID-19 mandates and restrictions.

Prime Minister Justin Trudeau, who refused to meet with the truckers himself or through representatives, invoked the Emergencies Act on Feb. 14 in response to the protests. The Act granted police additional tools to clear away protesters who had parked their trucks in downtown Ottawa for weeks.

At the same time, it gave the state additional powers such as freezing the protesters’ personal and corporate bank accounts without a court order and cancelling the insurance coverage for trucking companies linked to the protests.

The Nanos poll shows Canadians began expressing concerns over free speech and freedom in the final week of December 2020, polling at about 0.1 percent. The percentage gradually increased until it hit the week of Jan. 3 this year, when it jumped from 3 percent to its peak at about 10 percent in mid-February, trailing behind the coronavirus at 17 percent, and nearly on par with health care.

Nanos said the trucker protest and general rise in concern for personal freedoms reflect a growing populist sentiment seen in Canada, the United States, the UK, and other major democracies.

“There is a noticeable proportion of Canadians who believe that their freedoms have been impinged on or infringed on by the governments as governments try to fight the pandemic, and vaccinations being at the top of the list, and restrictions on the movement of people,” he said.

Nanos Research conducted the poll based on 1,066 random phone interviews of Canadians 18 and above, up to March 11. The data collected is based on a four-week rolling average where each week the oldest group of 250 interviews is dropped and a new group of 250 is added.

The poll is considered accurate within +/- 3 percentage points 19 times out of 20.