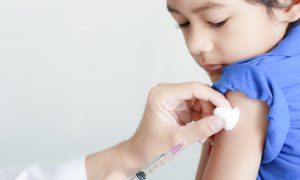 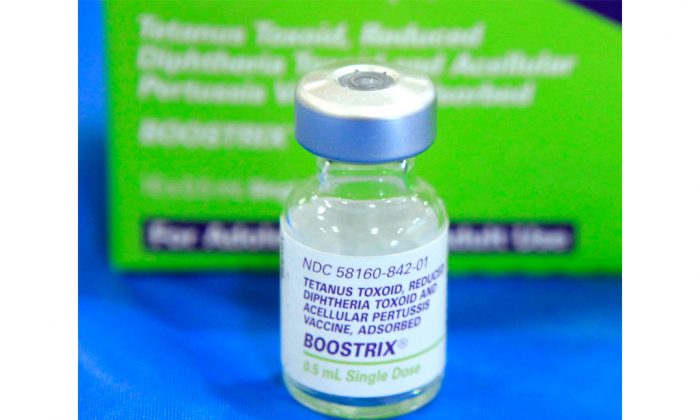 An empty bottle of Tetanus, Diphthera and Pertussis, (whooping cough) vaccine in Sacramento, Calif. on September, 2011. (Rich Pedroncelli/AP photo)
US

From the beginning of the year till mid June, the entire US recorded 9,964 cases of whooping cough, with California accounting for two-thirds of them, according to the Centers for Disease Control and Prevention (CDC). As of July 21, los Angeles had 1,000 cases reported, about one-sixth of all the cases in the state.

Last year there were 1,904 reported cases in California and no deaths.

Whooping cough is cyclical—every three to five years, a surge in cases occurs.

The last time whooping cough was raised to epidemic proportions in the state was in 2010. A little over 7,800 cases were reported with ten resulting deaths, all of them infants.

Since 2011, the state has required proof of a vaccine booster shot for all children entering 7th grade. Children in California are also required to get the shot before entering kindergarten, which protects against diphtheria and tetanus as well.

A number of parents and health professionals are concerned about the risks of vaccines, which is why the state allows parents to opt-out for religious or personal reasons.

For parents who are vaccinating their children, some doctors recommend a slower vaccine timetable than officially endorsed, especially for very young children.

“You can do a safer, slower vaccine schedule…If you’re doing 4, 5, 6 shots on a young infant, that could stress the child,” said LeTrinh Hoang, a pediatrician.

Children with who are ill or who have had an allergic reaction to the shot, who got a brain or nervous system disease within seven days of being vaccinated for whooping cough should not get it again, the CDC says. If a child has a fever, collapses, or has a seizure after getting the shot, they should see a doctor immediately.

Other concerns have surfaced about the widely-used acellular pertussis vaccine, which replaced the whole-cell vaccine after problems with side effects, such as fevers and screaming in children.

An FDA study published Nov 25, 2013, found the acellular pertussis vaccine is effective in preventing the disease, but suggested it may not prevent the spread of the bacteria to other people.

Other research has found the effectiveness of the vaccine only lasts three to five years, which is similar to the disease’s natural cycle.

Whooping cough starts out with cold-like symptom. It is a highly contagious bacterial disease characterized by uncontrollable coughs and gasps for air that make a whooping sound.