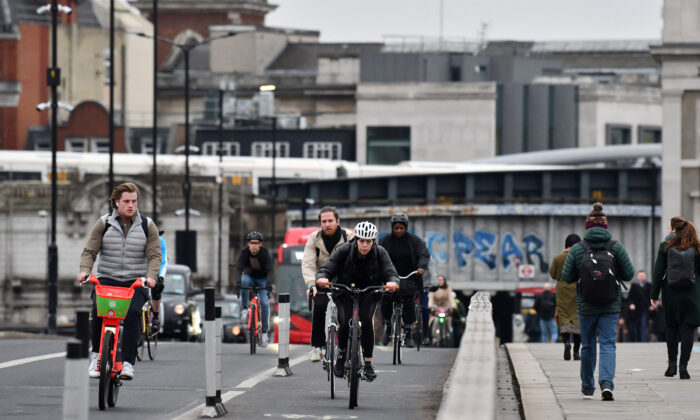 Following a dramatic but brief panic over the Omicron variant of the CCP virus that triggered compulsory mask-wearing and COVID passport, England has started living with COVID-19, this time without a contingency menu of restrictions.

From Jan. 27, masks are no longer legally required anywhere in England, and nightclubs and large events are no longer mandated to check NHS COVID Passes.

These “Plan B” measures were announced in September 2021 as a backup plan but were only triggered in early December after Omicron cases were found in the country.

People are still advised to wear face coverings in crowded and indoor spaces where they may come into contact with people they don’t normally meet, and businesses can still choose to impose these restrictions on their premises, but police no longer have the power to issue fines.

Transport for London—a local government body that is run by commissioner Andy Byford and chaired by London Mayor Sadiq Khan—has said it will keep requiring mask-wearing as a condition of carriage. Sainsbury’s business group, which operates a supermarket chain Sainsbury’s and homeware retailers Argos and Habitat, asked its customers to keep wearing face coverings in-store, while supermarket Waitrose and department store John Lewis are “suggesting” people to wear them.

The work from home guidance, which was also set off by Omicron, ended on Jan. 19.

On Jan 17, the self-isolation period for positive COVID-19 cases has been cut to five full days, subjected to test results, while their unvaccinated contacts still have to isolate for 10 days, but Prime Minister Boris Johnson has suggested that the blanket rule may be scrapped at the end of March.

Announcing the lifting of restrictions on Jan. 19, Johnson said the government needs to replace legal requirements with advice and guidance and urge people with the virus to be careful and considerate of others as COVID-19 becomes endemic.

Restrictions in care homes are due to ease next week.

From Monday, limits on the number of visitors allowed into care homes will be removed, the self-isolation period for positive cases will be cut to 10 days from 14 days, and outbreak management rules will be halved to 14 days.

From Feb. 11, vaccinated international arrivals will no longer be subject to tests or isolation, while unvaccinated arrivals have to take pre-departure and post-departure tests, but no isolation unless there’s a positive test.

CCP (Chinese Communist Party) virus vaccination as a condition for deployment in care homes has been in place since November 2021, and a similar mandate is set to take effect in wider health care settings on April 1, although Health Secretary Sajid Javid gave a slight hint that the planned rule is not yet set in stone.

Javid also told a select committee of MPs that a “living with COVID plan” due to be published in spring will set out how the government plans to deal with new variants and how the NHS will plan for “surge capacity” as and when it is needed.

The ease of the restrictions in England came as the number of hospitalisations and deaths didn’t follow the steep curve of case numbers, and after the government accelerated a booster vaccination campaign and started antiviral drug trials that it believes would reinforce protection. But Johnson also had a political incentive to scrap the restrictions.

A record-size Tory rebellion was staged when the Plan B measures were voted through by lockdown-skeptical-backbenchers, who appeared to have gained more momentum as Johnson faces a continuous drip of allegations that he broke his own rules on social gatherings.

The prime minister is now facing the largest crisis of his career as police are involved in the so-called Partygate investigation, and calls for resignation from opposition parties were chimed by his own party members.