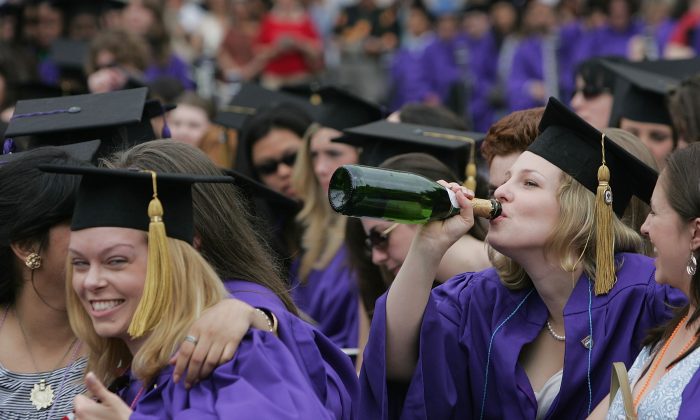 Knowledge always has a price

Should everyone go to college?

Last year, Sen. Bernie Sanders (I-Vt.) introduced the College for All Act, which would federally fund states to reduce tuition to zero at all public colleges and universities. Like other recent big-ticket proposals from the left, it’s a blunt instrument, willfully throwing away important information about students and job opportunities in favor of a big, centrally planned initiative.

Instead of dismissing it, let’s take Sanders’s proposal as a challenge. There are at least two very good reasons why the status quo in paying for post-secondary education isn’t cutting it. The first is access—we want talented low-income kids to be upwardly mobile and contribute to society. The second is student loans, which if aren’t a full-blown crisis, are at least a full-blown mess.

Fortunately, there are exciting potential solutions to these problems that combine the power of free markets, the strength of communities, and the value of a good education.

The Cost of Free Tuition

Making college free would essentially treat every student, type of education, and career track the same. This approach fails on at least three accounts.

First, it fails to target the right kids in terms of need. In many ways, free public college would represent a wealth transfer to upper-middle and high-income families—the ones who aren’t already receiving financial aid. Help could be far better targeted to kids currently slipping through the cracks of the financial aid system or those being saddled with student debt.

Second, it fails to focus on the right kids in terms of potential. Instead of finding the most talented kids who would run with the opportunity and create a better life for themselves, college-for-all has no means of targeting based on intelligence, maturity, or desire.

Finally, it fails to target the right kinds of education. At age 18, some kids should be going to universities, some to vocational schools, and some straight to the workforce. The idea that everyone should go to a four-year college is accepted as gospel by many American professionals, but that isn’t always the right path to the best life. And within types of school, there are majors and tracks that will be particularly valuable for future workers.

Trying to add this kind of “targeting” to a Sanders-style bill would still miss the mark, simply adding a layer of bureaucracy and complexity to an already fatally-flawed solution. The answer comes when we start thinking of students as individuals who merit investment rather than an automatic free education.

And forget student loans, as analyst James Altucher described in an interview with The Epoch Times:

“So you have to ask why, and this has nothing to do with whether college is a good experience or a bad experience. But it does drastically affect the way kids today are viewing their opportunities in the world versus when I was a kid. I graduated a couple of decades ago and I had student loan debt, but that was very different than the debt people graduate with now.

“Because that debt is guaranteed, colleges say, ‘Oh well, we know we’re going to get this money. Nobody is going to prevent us from getting this money.’ So, colleges raise tuition every single year, and tuitions now are unbelievably huge.”

Ownership, Not Loans or Handouts

Purdue University in Indiana is a pioneer in income-sharing agreements (ISAs). If a student loan is like a bond, an ISA is like a stock. Students are given a fixed amount of money upfront to cover college costs, and then pay back a certain percentage of their income for a pre-determined length of time. The terms of the ISA vary based on major, with more favorable terms offered to more lucrative fields.

For example, as Amelia Friedman wrote in The Atlantic last year, “A senior majoring in economics who took out $13,000 in a ‘Back a Boiler’ ISA would pay 4.39 percent of her income over 100 months, up to a maximum of $32,500.” There’s generally a cap on the total amount paid back, so as not to disincentivize high earning, as well as a cap on the number of months.

What if a student doesn’t find a job, or makes less money than expected? Just like investing in a startup company, the investor takes a hit, and the student isn’t saddled with lifelong debt. Students also are allowed to defer the start of payment for four years for a list of reasons, including family and grad school.

ISAs are currently offered by Purdue itself through an endowed fund. The university even provides a calculator where students can compare likely payments for ISAs and more conventional loans for a given major and graduation date.

Think about the three missed targets of the Sanders bill: need, potential, and educational track. The ISA has a way of hitting them all.

Purdue’s experiment got me thinking about other ways that ISAs could be provided. They could truly be revolutionary.

Suppose, for instance, that a non-profit was started in a community with a lot of low-income students. It could be seeded by a combination of schools, donors, community members, and perhaps a fraction of the money that would have gone to making college free. An appointed board of community members and donors would select students to receive ISA backing.

These wouldn’t necessarily be the students with the best high school grades. Selection could take financial hardship into account, along with students fitting well in various schools and programs—from vocational schools to the Ivy League.

There are certainly risks, but if such a program were structured the right way, it could pay for itself plus returns. That would allow an ever-growing number of students to benefit down the line.

With a program and cohort in place, students could also help each other. They could meet every few weeks, either remotely or in person, to discuss the challenges they face and encourage each other to keep working hard. Another requirement for successful recipients after graduation could be to mentor some of the next wave of students.

Centralized one-size-fits-all approaches to policy are like putting on a blindfold before going through an obstacle course. By ignoring markets, they purport to be more humane, but fail to get the right help to the right people. Sanders and others should consider the staggering possibilities that emerge when free enterprise and a generous spirit are combined.