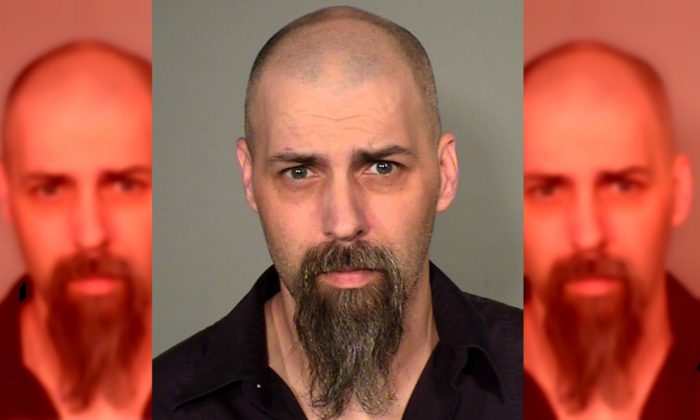 A “free citizen” who refused to follow traffic laws threatened officers with a pig-shaped “device” during a four-hour stand-off that ended when a bomb squad robot deployed irritant chemicals through the window of his RV, and tore its rear door off.

Dennis Duane Vann, 42, was charged with making threats of violence with reckless disregard for risk, and fleeing police, both felonies, according to Minnesota authorities.

Authorities are investigating whether the “energetic” powder in the device qualifies as explosive under state law.

Law enforcement was called out by a grocery store in Maplewood , after Vann refused to move his RV.

Checking his records, they found he had no driver’s licence, and had an outstanding warrant for non-payment of child-support .

They got no response when they knocked on the door of the RV, which soon after moved off, with Vann ignoring the flashing lights of the police as they followed.

Vann pulled over at nearby strip mall, but refused to cooperate, and when officers asked if he had any weapons, according to the criminal complaint, he said he had a “great big boom.”

The police called in the SWAT team and the mall car park was partially evacuated during a four-hour standoff.

“Due to the threat of an explosive device, St. Paul Police Bomb Squad personnel assisted in the resolution of the incident,” said a Public Safety Department statement.

“Negotiators were in regular contact with Vann throughout the course of the incident, however, he remained erratic, refusing to cooperate. After all options for cooperation were exhausted, an irritating gas was introduced into the RV, which ultimately, led to Vann’s surrender.”

‘He Said He Doesn’t Need a Driver’s License’

They recovered a device was shaped like a pig from his RV,  with the words “(expletive) the police” written on it, according to Eyewitness News.

The device “held an energetic powder and appears to be an explosive device”, according to the complaint, which says further testing is required to determine whether or not it would qualify as an explosive device under Minnesota law.

“When told he was being stopped because his license was revoked and he had a taillight out, Vann said he didn’t need a driver’s license and is not required to follow the traffic laws as he is a free citizen,” the complaint said, according to Twin Cities.

“He said, ‘A couple of cops are going to die.’ … He made multiple references to having an IED [improvised explosive device],” said Maplewood Police Chief Scott Nadeau, reported Twin Cities. “Looking at the incident after the fact, our community can be proud that our officers acted with a great deal of restraint. The hours that passed, the conversations the officers had with him, they really tried to give him every opportunity to cooperate.”

People who call themselves “free citizens,” or “sovereign citizens,” believe that the government has no legitimate authority over them.

“He said, ‘a couple of cops are going to die.’ … He made multiple references to having an I.E.D.,” said the Maplewood police chief.

“I would say my experience with the sovereign citizens is some are very well versed in that ideology, (but) there are others who just choose to not recognize the authority of the government. That overarching theme is denial of authority,” Nadeau said.

According to Twin Cities, the conflict escalated when Vann refused to leave his vehicle. When officers said they would be required to remove him from it, Vann told them “that would be a huge mistake,” the complaint said.

When asked why, he replied, “Because two people would die today—that’s (expletive) why.” He then reached toward a space between his RV’s front seats.

The incident started at 5:10 p.m. Vann eventually crawled out of a window and surrendered at 9:30 after the bomb squad robot removed the curtains from the RV’s bay window and sprayed more chemical irritant inside.

“The warrant, issued Feb. 5, was for failure to pay child support after Vann didn’t appear at a Kanabec County court hearing, according to a court record,” said the police in a statement.

The sovereign citizen movement is categorized as a domestic “extremist” movement by the FBI.

“Sovereign citizens believe they are separate or “sovereign” from the United States even though they live here,” the FBI website states in an explainer. “They think they don’t have to answer to any government authority. Sovereign citizens use their beliefs to justify fraud and other non-violent crimes. But some sovereign citizen extremists turn to violence and commit murder, threaten public officials, and destroy property as part of their anti-government, anti-tax beliefs.”