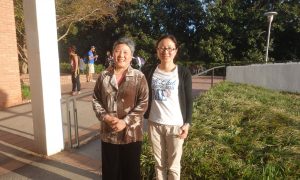 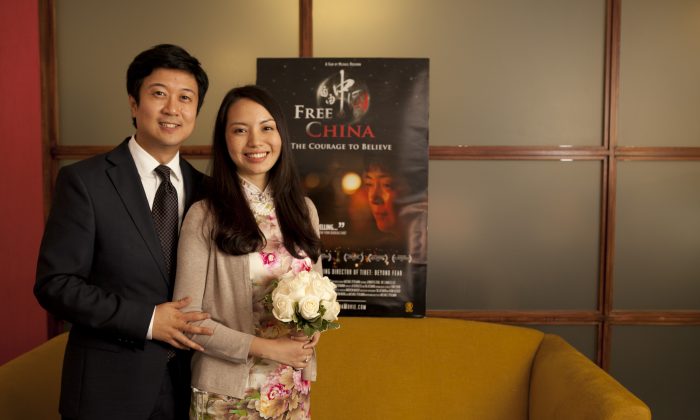 Kean Wong (L) , producer of "Free China: The Courage to Believe," with his wife, Xixi Deng, on their wedding day, shortly before the screening of Free China at NTD Television headquarters in New York City, Oct. 10, 2013. (Samira Bouaou/Epoch Times)
Entertainment

NEW YORK—The life of the producer of an award-winning documentary has become more intimately tied with his film, Free China: The Courage to Believe.

A longtime bachelor, Kean Wong finally met the love of his life. Now, in a situation similar to what is depicted in his film, he is doing everything he can to prevent his wife from being persecuted due to her beliefs.

When the couple met in May, their connection was unmistakable. “Instant recognition,” Wong and Xixi Deng said simultaneously as they looked at each other smiling and nodding. “I was smitten,” Wong said with a big smile. “I found her kind, intelligent, courageous, yet humble. She was very outgoing and friendly from the outset, and there was that instant chemistry,” he added.

But their happy union does not lack challenges.

In China, Deng was harassed and persecuted because she practices Falun Gong, a meditation discipline the Chinese Communist Party has been persecuting for over 14 years. It is also the main theme in Wong’s film.

Deng graduated with a degree in engineering from Tianjin University of Commerce, specializing in computer science and technology. Her family runs a chain of kindergarten schools in China, where she was working as the principal’s assistant, and was being groomed to take over the family business.

In March 2012, while working at her aunt’s kindergarten, Deng was approached by a female 610 Office agent pretending to be a Falun Gong practitioner. The 610 Office is an extrajudicial agency set up by the Communist regime specifically to carry out the elimination of Falun Gong in China.

The woman initially seemed friendly, but the conversations turned increasingly sinister. The agent slandered Falun Gong in front of Deng’s aunt. She threatened Deng that if she did not give up the practice, she would be arrested and her family’s business would be adversely affected.

As Deng’s immediate family did not practice Falun Gong, they all tried to convince her to give up her beliefs. “The pressure and sense of isolation I felt was very difficult to overcome,” she said, her eyes glazing while keeping her composure.

The 610 Office not only orders the imprisonment and torture of Falun Gong practitioners, it also persecutes family members, friends, or anyone who associates with or supports practitioners, according to the Falun Dafa Information Center, a website for news about Falun Gong.

Upon arrival in the United States, she reached out to local Falun Gong practitioners and started to get involved with various activities to help raise awareness about the persecution in China. As fate would have it, the Free China private screening coordinator in Atlanta took Deng to New York in early May of 2013 where Wong and Deng met. Shortly after, Wong started to help Deng with her asylum application.

Over the next few months, the couple grew very close, and finally married on Oct. 10 in New York’s City Hall. That same day Wong co-hosted a Free China screening with Melodie Bryant, also a documentary filmmaker, at the headquarters of NTD Television in New York City, where Wong has worked for over 8 years.

When asked why she wanted to co-host the film, inviting 40 guests, Bryant said, “Everyone I know is pretty well informed, and most everyone is politically aware. But clearly almost no one knew about the real situation with the Falun Gong in China, just as I had not known.”

When Deng watched Free China: The Courage to Believe, she was moved to tears. She said, the film “is a very accurate depiction of how Falun Gong practitioners are persecuted in China.”

Deng thought it was quite meaningful and memorable to have a screening on their wedding day. She said, “With so many hundreds of thousands of innocent people still languishing in labor camps, and tens of millions of people still being affected by the persecution, it really is critical that people around the world learn about these atrocities and do something about it now.”

Bryant said: “The general reaction of my guests was much like mine when I first saw the film: horror at the treatment of the Falun Gong by the Chinese regime, and especially at the aspects of organ harvesting and forced labor. I think each of us was personally horrified to learn that one of the products of forced labor was Homer Simpson slippers. Because although it’s unlikely that any of us have a pair, I think we all felt some personal responsibility.”

Bryant said that everyone she invited was clearly moved and thanked her for the screening.

“If each of us tells 40 people, as I have, the awareness of China’s horrific violations of human rights will be inescapable,” she said.

Three days after the screening Wong and Deng celebrated their wedding with family and friends in New York City. In the meantime, the couple is now waiting for Deng to receive notification for an interview with an asylum immigration officer. Despite the arduous process of applying for asylum, Wong said he is determined to do everything he can to secure his wife’s safety as well as spreading further the message of Free China.