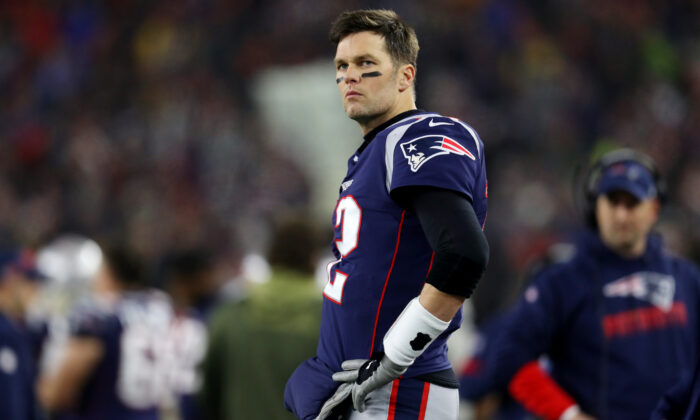 Tom Brady #12 of the New England Patriots looks on from the sideline during the the AFC Wild Card Playoff game against the Tennessee Titans at Gillette Stadium in Foxborough, Mass., on Jan. 4, 2020. (Maddie Meyer/Getty Images)
By The Associated Press

Tom Brady preparing to trade the red, white and blue threads of this century’s most successful franchise for one of the NFL’s bottom feeders served as the highlight of a topsy-turvy start to the league’s new year on March 18.

Brady, 42, will take his six rings from his unparalleled 20-year reign in New England to Tampa, where the Buccaneers have sat out the playoffs every season since 2007.

During that time, Brady has won 18 playoff games and half of his record-tying six Super Bowls.

Like the rest of everyday life that’s been upended by the CCP (Chinese Communist Party) virus pandemic, the start of free agency was anything but normal, with Brady’s deal and most every other one in semi-limbo.

Free agent contracts and trades agreed upon in recent days or weeks won’t become official until players can undergo physicals and sign their new deals—meaning they aren’t being paid under their new deals. The NFL has barred travel to team facilities by free agents and also has banned team personnel from traveling to meet with players as a safeguard against the CCP virus.

Several people familiar with a memo the league sent to the 32 teams on Tuesday night tell The Associated Press that while teams can announce reaching agreements with free agents or concluding trades, nothing is official. The people spoke on condition of anonymity because the information has not been made public by the NFL or the teams.

Although information on dozens of contract agreements and a slew of trades has been leaked, teams were not allowed to complete the deals until the 4 p.m. EDT Wednesday start of the 2020 NFL business year. However, all of those transactions now come with the caveat that the signings and physicals need to occur.

Of course, if a club drafts a contract and sends it digitally to a player, he can sign it remotely and send it back to the team. Then teams must submit it to the league and that would constitute official signing. But few, if any, teams would be willing to do that without conducting a physical.

Players can undergo physicals locally, but many teams have expressed being uncomfortable with such an arrangement.

The CCP virus causes only mild or moderate symptoms such as fever and cough in most cases, with severe illness more likely in the elderly and those with existing health problems.

A.J. Bouye, whom Denver acquired from Jacksonville two weeks ago and who took his physical in Denver before the pandemic brought daily life across the globe to a near standstill, said he’s working out on his own and will reach out to his new teammates remotely.

“They could always get my number. I could reach out to them through social media,” Bouye said Wednesday, adding, “One thing about it, I’m just focused more on working out also. I have everything set up at home (in Atlanta). My trainer is with me, so I’m definitely good with that.”

Among the players moving in free agency in one of the busiest years of action are such stars as Brady, Philip Rivers, and Jason Witten. While they certainly can afford to wait for everything to become official, it’s a strange dynamic in what, of course, is a strange time.

The NFL has delayed the offseason schedule of practices amid the uncertainty—meetings and organized team activities (OTAs) would have begun in April. Becoming familiar with new surroundings, teammates and coaching staffs for the likes of veterans Brady, Rivers and Witten—who collectively spent 52 years with their original teams—and the dozens of other players changing addressed must wait.

Several of Brady’s ex-teammates are also leaving Foxborough and many of them are reuniting with former Patriots assistants Matt Patricia in Detroit and Brian Flores in Miami.

While Brady’s representatives and the Buccaneers worked out details of their contract, teams went ahead with their plans to bolster their rosters amid all the uncertainty:

Dolphins: From tanking to banking, the Dolphins have been the busiest team on a spending spree, committing a whopping $133 million in guarantees to seven players.

That’s big change—and a big change for a franchise that began stockpiling money and draft picks a year ago with a roster dismantling so drastic Miami used an NFL record 84 players and was accused of tanking.

Broncos: A day after losing out on NT D.J. Reader to the Bengals, the Broncos made their second big trade by acquiring five-time Pro Bowl DL Jurrell Casey from the Tennessee Titans for a 2020 seventh-round pick, people familiar with the deal told The Associated Press.

Casey, due $11.2 million this season and under contract through 2022, plugs a gaping hole on Denver’s D-line just as the free agent acquisition of C-G Graham Glasgow (four years, $44 million) fills a big need on the O-line.

Steelers: Pittsburgh turned the opening day of free agency into a family affair for the Watt family, agreeing to terms with OLB T.J. Watt’s older brother, FB Derek Watt, on a three-year contract worth $9.75 million.

“’Come to Pittsburgh’. IT WORKED!!! Welcome to #SteelerNation,” T.J. Watt posted on Instagram along with a picture of the two brothers talking on the field while Watt was still with the Chargers.

Their other brother, J.J. Watt, is a three-time Defensive Player of the Year for Houston.

Cardinals: Arizona bolstered its struggling defense by agreeing to deals with DL Jordan Phillips and LB Devon Kennard. But as has usually been the case over the past year in Arizona, the loudest buzz is surrounding the offense. Arizona’s biggest move came on Monday, when the team added elite WR DeAndre Hopkins in a trade with Houston that sent RB David Johnson to the Texans.

Chargers: CB Chris Harris Jr. is remaining in the AFC West after agreeing to a contract with the Los Angeles Chargers, a person familiar with the situation told the AP. Harris spent nine seasons in Denver, anchoring the “No Fly Zone” defense that helped the Broncos win Super Bowl 50.

Saints: Veteran free agent safety Malcolm Jenkins has agreed to a four-year, $32 million contract with the New Orleans Saints a person familiar with the situation said.

Jenkins returns to the team that made him a first-round draft choice out of Ohio State in 2009. Jenkins, 32, has played 11 NFL seasons—his first five with the Saints and past six with the Philadelphia Eagles, who declined to pick up his option for the 2020 season.

Colts: The Colts have confirmed they have acquired All-Pro defensive tackle DeForest Buckner for next month’s first-round draft pick, No. 13 overall.

By Arnie Stapleton and Barry Wilner. The Epoch Times contributed to this report.