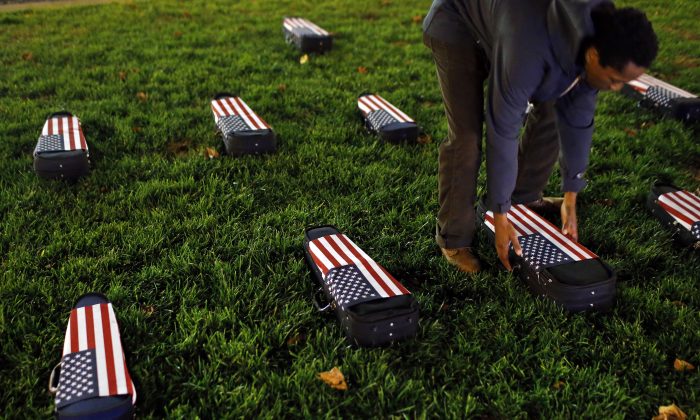 Charles Mason III collects musical instrument cases representing coffins of victims of police violence outside of Baltimore City Hall in Baltimore on Wednesday, Dec. 16, 2015. Mason's mentor, artist Paul Rucker, placed the cases in response to the trial for Officer William Porter, one of six Baltimore city police officers charged in connection to the death of Freddie Gray. The trial ended Wednesday with a hung jury and mistrial. (AP Photo/Patrick Semansky)
US

BALTIMORE—The Baltimore Police Department is a clear loser in the no-win situation left by a hung jury in the state’s first effort to convict an officer in the death of Freddie Gray.

Both defense attorneys and prosecutors portrayed the department as so dysfunctional that its officers either aren’t aware of mandatory orders or ignore commands without consequence. First responders described being unfamiliar with first aid. Officers said they only check their email once a month, on old computers that barely work.

When Gray finally arrived at the Western District station injured and comatose, Officer Zachary Novak testified that he tried to revive him with a “sternum rub”—a pain stimulus that involves grinding the chest with a fist. “I was never qualified to do it. I just saw it a few times in my career,” Novak said.

The jury deadlocked Wednesday, Dec. 16, on all four charges against Officer William Porter: manslaughter, assault, reckless endangerment, and misconduct. Prosecutors portrayed Porter as a callous officer who intentionally failed to buckle Gray into a seat belt and didn’t call an ambulance even after Gray indicated he needed medical aid. But Porter said officers rarely belted prisoners, if ever, despite their general order requiring them to do so. He called it common practice to avoid calling ambulances.

Witness after witness told similar stories reflecting institutional failures and chaotic, dangerous situations. Young officers on patrol weren’t adequately trained or mentored, they said, and simply tried to do their best despite next-to-no experience. Porter even described how his academy training was disrupted when a teacher accidently shot a student during an exercise.

Prosecutors sought to show that a single officer failed in his duty. The defense exploited deep fissures between the police and the people of Baltimore, saying the department failed its officers as well as the city it’s designed to protect.

As the three-week trial progressed, jurors got schooled in aspects of policing that rarely show up on TV.

“The case is emblematic of a bigger issue: In the wake of scandal, the bureaucrats roll out an official police department that doesn’t really exist,” said Eugene O’Donnell, a former officer who teaches at John Jay College of Criminal Justice in New York. “Cops are alienated from the public, like in Baltimore. But in every department, cops are often alienated from their own bureaucracy, and that’s a huge issue.”

Officer Mark Gladhill testified that he had never belted a prisoner, and couldn’t recall any of his emergency medical training, let alone what he should do when prisoners struggle to breathe. Officer Matthew Wood said he had never seen anyone buckle a prisoner in a van during more than 100 arrests.

Prosecutors said such testimony reflects a “culture of silence” in which police protect their own, but that argument could have backfired. If the problem is bad barrels rather than one bad apple, “we want the entire institution to be held accountable” said Brian Garrett, a University of Virginia professor who specializes in policing and civil rights litigation.

“We know police departments have a bad culture of tolerating brutality, but it’s incredibly difficult to challenge a culture in a court case. It’s these officers who are on trial, but the reputation of the police department was irreparably damaged when Freddie Gray died.”

Baltimore’s history is already rife with allegations, investigations, lawsuits, and expensive court settlements over how officers treat people on the streets and in custody.

As mayor from 1999 to 2007, Democratic presidential candidate Martin O’Malley championed aggressive policing in response to endemic crime. The NAACP and ACLU sued, blaming systemic abuse of power for the arrests of thousands of people without probable cause.

The city didn’t even wait for Gray’s family to sue before paying them $6.4 million, reasoning that Baltimore jurors would recommend a far more expensive payout in a civil case.

The city settled in 2010 for $870,000, agreed to retrain officers, and publicly rejected zero-tolerance policing, but complaints continued: A Baltimore Sun investigation last year revealed the city had paid roughly $5.7 million in police brutality settlements, involving 102 instances of excessive force, since 2011.

Abuses linger in the collective memory of neighborhoods like Sandtown-Winchester, where Gray was arrested when he tried to flee from officers. His neighbors said it can be safer to run from police than risk interacting with them at all.

The city didn’t even wait for Gray’s family to sue before paying them $6.4 million, reasoning that Baltimore jurors would recommend a far more expensive payout in a civil case.