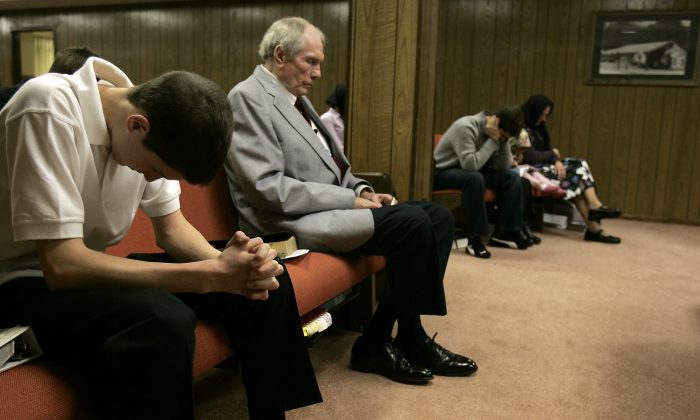 Westboro Baptist Church founder Fred Phelps died last week, but there’s a number of satire and erroneous reports going around that he will have a funeral.

The church said that Phelps will not have a funeral. According to the Christian Science Monitor, Margie Phelps, his daughter and a church member, said that a funeral will not be arranged for him.  He was 84 when he died.

Westboro adherents say that funeral practices are the same as “worshiping the dead.”

Phelps died in Topeka, Kansas, after he was essentially voted out of leading the church. Nate Phelps, an estranged son of the preacher, told the Topeka Capital-Journal that Phelps was voted out of the church, but Westboro officials did not confirm the reports.

“We don’t discuss our internal church dealings with anybody,” a spokesperson told the newspaper.

However, one rumor said that the thrash metal group Slayer would be protesting Phelps’ alleged funeral.

“Gullible metal heads and the bandwagon of people looking to dump on Phelps started sharing links to unreliable sources saying that the members of Slayer were camped outside the Westboro Baptist Church in Topeka, with no photographic evidence or quotes or basically anything that would lend a shred of legitimacy to the claim,” Vice.com wrote.

Vice reached out to a Slayer spokesperson, who said, “Anyone who knows anything about Slayer would know that this was a send up.”

Also, satire articles from both the National Report and Daily Currant said there would be protests at Phelps’ funeral.

The articles aren’t true, as both websites only publish fake news.

A Facebook page, “Protest Fred Phelps’ Funeral,” was also set up after his death.

“Keep in mind that protest comes in many forms — sit ins, letter writing, boycotts, pickets, etc. We neither condemn nor condone any method you choose if you choose to make a presence in the coming days. We just ask that you maintain civility and respect your local laws. The point of this page is meant to be symbolic in nature,” it says.