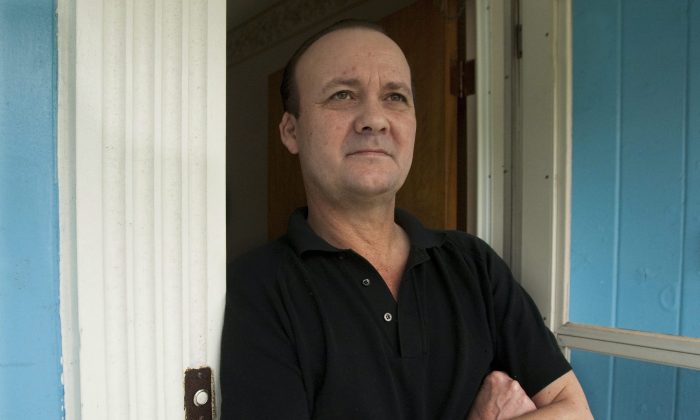 Halifax resident Rob Rogers was the victim of an online romance scam that saw him lose just over $14,000. He now acts as a peer counsellor with RomanceScams.org to help others avoid being duped. The RCMP’s Commercial Crime Branch estimates that fraud-related offences cost the Canadian economy between $10 and $30 billion annually. (The Canadian Press/Andrew Vaughan)
Canada

A scam that Daniel Williams encountered early in his career with the Canadian Anti-Fraud Centre has kept his blood boiling ever since.

A U.S. mother, desperate to find travel funds for her five-year-old son’s regular cancer treatments at a clinic nearly 100 kilometres away, responded to a newspaper ad promising guaranteed loans from a Toronto bank—a fictional offer concocted by scammers.

The $5,000 loan was quickly approved after the woman agreed to pay $500 to secure it. She thanked the “bank teller,” telling him the loan represented her child’s last chance of survival. Despite knowing the child’s life hung in the balance, the scammer didn’t hesitate to exploit the mother further, saying she could get the money even faster by immediately paying an additional $180 fee.

“They will steal money that you don’t have. They will take your last penny. They will put you into debt. And at the end of it they will laugh in your face from the safety of a phone or an email.”

With the start of Fraud Prevention Month at the beginning of March, Williams is urging Canadians to be on their guard against financial fraud and identity theft, which drained over $20 million from nearly 22,000 victims in Canada last year.

According to the CAFC, today’s scam victims appear to be shifting away from the stereotypical “lonely senior” toward the baby boomer age bracket. CAFC figures suggest that Canadians aged 50–69 represented the highest number of victims and lost the most money in mass-marketing fraud schemes last year.

With the continuous rise of sophisticated digital scams “everybody is susceptible,” says Williams, and scammers are increasingly targeting specific groups rather than a mass audience.

One of the most lucrative schemes currently affecting Canadians is the so-called “romance scam,” says Williams, where perpetrators target those looking for love online. The scammers create a false identity on dating websites and troll for unsuspecting users. Once trust is established with their target they ask for money, usually for a highly urgent emergency situation. Once they get their hands on the money, they disappear.

Many of the typical victims have been divorced or are seeking a last chance at love, making them more prone to ignore warning signs, says Williams.

“Their gut may be telling them one thing, but their heart is hoping that it’s something else.”

There are dozens of known scams, and new ones are “invented every day,” says the CAFC website. One of the most common schemes in Canada is the “service scam” which typically involves third parties that make offers for telecommunications, Internet, finance, medical, or energy services.

A popular example is the “Microsoft scam,” which has fraudsters pose as IT professionals from Microsoft who convince victims they have computer problems. The scammers then access the computer, create false technical problems, and bill the victims—often on an ongoing basis.

“The effort that the [scammers] put into it is phenomenal, and they can do that, because it’s the exact same storyline that they’re going to be using with 1,000 other people,” says Williams, adding that even if only a tiny percentage of people fall for the scam it can still be highly lucrative.

“Prize pitch” scams and “grandparent scams” are some of the most common to successfully victimize older Canadians. In the prize scam, victims are told they have been awarded valuable items such as a luxury cruise or a car, but must “pay in advance” to receive it.

In the “grandparent scam” a grandparent receives a phone call from a con-artist posing as one of his or her grandchildren. The caller goes on to say that they are in some kind of trouble and need money immediately.

According to the CBC, a new scam known as synthetic identity fraud has been increasing in Ontario. In the scheme, identities are completely or partially fabricated by creating genuine identification cards (i.e. driver’s licences) using false names.

The documents give fraudsters advantages when used with other fraudulent identification and allow them to obtain Canadian passports, register a business, get approved for loans, and so on.

According to a national survey conducted for the Chartered Professional Accountants of Canada, nearly a third (29 percent) of the Canadian respondents reported being duped by some form of financial fraud and 43 percent know someone who has been a fraud victim.

Still, Canadians shouldn’t be afraid to do business or pursue financial opportunities, Williams notes. The most important way to protect oneself from scams and ensure offers are legitimate is to do research before signing up for anything.

“In the vast majority of scams, it would take less than 15 minutes [researching] online to determine that what you’re dealing with is a fraud,” says Williams, adding that the proliferation of personal blogs means someone else has almost always posted warnings about a scam online.

When in doubt, call the CAFC before agreeing to anything, he says.

“Everything can be verified before you part with money, because once you’ve parted with it, generally speaking that money is gone for good.”