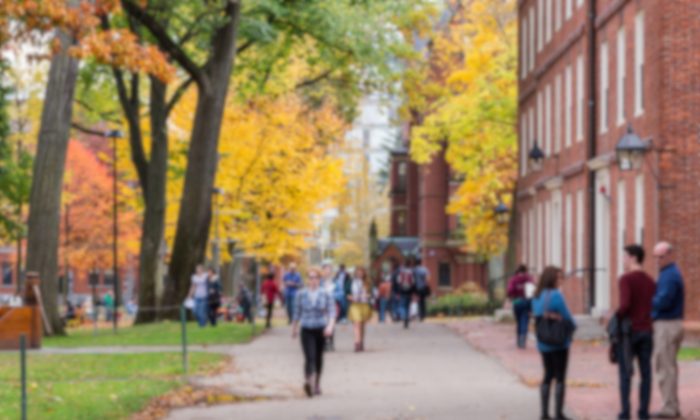 Some policy experts blame the continuing influence of John Dewey’s progressive theories for why so many high school students are underprepared for university. (By Jannis Tobias Werner/Shutterstock)

This article is part 6 in a series examining the origins of public education in the United States.

Understanding that future generations are the key to building political power and lasting change, socialists and totalitarians of all varieties have gravitated toward government-controlled education since before the system was even founded.

The communist “Frankfurt School” was no exception in its affinity for “educating” the youth.

Almost 100 years ago, a group of socialist and communist “thinkers” led by Marxist law professor Carl Grünberg established the Institute for Social Research (ISR) at Goethe University Frankfurt in Germany. From there, they would move to the United States. And from their new home in New York City, the subversive ideas they espoused would eventually infect the entire planet like a deadly cancer—mostly through the education system.

The group actually had its genesis in Moscow before officially being founded in 1923. By the early 1920s, the Bolsheviks—as Antonio Gramsci would later conclude from his Italian prison cell—realized a change in tactics was needed. The much-anticipated violent revolution of the proletariat predicted by Karl Marx to bring about communism, it turned out, would be much more difficult in Western Europe and the United States than previously anticipated. In fact, it wouldn’t be possible at all without first breaking down the cultural barriers to collectivism, they reasoned.

At the Moscow meeting, the conspirators decided that what was needed was a more gradual “cultural revolution,” or what eventually came to be known as “cultural Marxism,” in the West and beyond. To advance that program, the subversives agreed on a sinister but brilliant plan. This would involve the destruction of traditional religion and the Christian culture it produced, the collapse of sexual morality and the deliberate undermining of the family, and a wrecking ball to infiltrate and demolish the existing institutions.

Some of these men had experience. For instance, Lukacs, who served as “minister of education and culture” in the Bolshevik Hungarian regime of Bela Kun, had introduced all manner of perversion and grotesque “sex education” in public schools, starting in elementary school. It was part of a campaign to destroy “bourgeois” Christian morality and sexual ethics among the youth. The objective was to eventually de-Christianize Hungary, thereby facilitating a total communist restructuring of the human mind and all of society.

A key tool of these conspirators in Moscow would come to be known as the Frankfurt School. From the Institute in Frankfurt, and later in New York, these cultural revolutionaries would promote feminism, communism, atheism, mass migration, globalism, humanism, multiculturalism, nihilism, hedonism, environmentalism, and all sorts of other “isms” that tended to undermine individual liberty, traditional culture, and morality. Rampant morality-free sexuality and Freudian pseudo-psychology were central to the agenda.

To anyone who has studied America’s public education system today, which spends far more time peddling these “isms” to captive children than providing actual education, the stench of the Frankfurt School’s machinations is unmistakable. In fact, the whole system reeks.

Despite some differences, the group maintained close ties with the Soviet Union. Ironically, though, analysts have long argued that the work of the institute peddling Nietzsche and others helped lay the foundation for the National Socialist takeover of Germany. As the Nazi regime of Adolf Hitler gradually parted ways with the more internationally minded socialist tyranny of the butchers in Moscow, the civilization destroyers at the ISR fled to the United States.

There, with crucial assistance from socialist and humanist “education reformer” John Dewey and his disciples, these characters attached themselves to Columbia University’s important Teachers College in 1934. Dewey had been a leading “philosopher” and “educator” at Columbia, retiring just a few years before the Frankfurt School influx was in full swing. Others settled at Berkeley, Princeton, and Brandeis.

With Rockefeller money, Dewey would play a key role in helping the Frankfurt School’s operatives put down roots in America. More on the role of the major foundations in subverting American education will be detailed in an upcoming piece of this series.

The importation of Frankfurt School luminaries was a match made in totalitarian heaven, as Dewey and his disciples had much in common with the cultural Marxist social revolutionaries.

As previously recounted in this series on education, for instance, Dewey was a devoted fan of the Soviet model. In fact, he wrote glowing reports about the supposed successes of Soviet communism in the “New Republic” magazine. Dewey was especially infatuated with the indoctrination centers masquerading as schools—and particularly how they were instilling a “collectivistic mentality” in the children. Dewey’s collectivist, anti-Christian “religious humanism” also appealed to the Frankfurt operatives.

Once the institute’s minions set up shop at Columbia and other prestigious U.S. academic institutions, the Frankfurt School’s rhetoric had to change, at least superficially, as Americans were still ardently devoted to God, country, family, and individual liberty. And so, instead of speaking openly of Marxism and communism, Frankfurt School subversives spoke of “dialectical materialism.” Instead of attacking the family, they attacked “patriarchy.” But the agenda remained the same.

Almost as soon as they arrived, they began plotting the destruction of America’s traditional values, religion, and form of government under the guise of fighting “fascism.”

Indeed, the luminaries of the Frankfurt School, who represented a wide variety of disciplines, used “education” as a crucial tool for advancing their totalitarian, civilization-destroying philosophies. But they infected much more than just the education system, with their sick ideas spreading out like a poison throughout the intellectual veins of America: the social sciences, entertainment, politics, and beyond.

One of the ways in which Frankfurt School operatives and academics advanced their desired social changes via education was through so-called critical theory. In his 1937 work “Traditional and Critical Theory,” ISR Director Max Horkheimer argued that critical theory—a neo-Marxist tool used to demonize the market system, Christianity, and Western civilization—was aimed at bringing about social change and exposing the alleged oppression of people by capitalism.

Another useful tool for undermining freedom and traditional society was the 1950 work by key Frankfurt School theorists known as “The Authoritarian Personality.” These social “researchers” claimed to discover that the traditional American male and father was actually “authoritarian” because, among other reasons, he held traditional values. Thus, the “patriarchy” and the traditional family—among the most important barriers to tyranny—came under relentless attack as a precursor to “fascism.” Public schools were viewed as tools to combat this alleged problem, and they did so vigorously.

To understand just how central Teachers College (infected by Frankfurt School and Dewey ideas) would become to the public education in the United States, consider that, by 1950, estimates suggest that a third of principals and superintendents of large school districts were being trained there. Many of these left the college with radical ideas about reality, government, society, family, and economy that came straight from Dewey and the Frankfurt School.

Of course, the damage to America from anti-God, anti-freedom German “intellectuals” began even before the Frankfurt School migrated to Columbia. In fact, Dewey was trained by G. Stanley Hall, who was among the many Americans to study under professor Wilhelm Wundt at Leipzig University.

Among other notable highlights, Wundt pioneered the idea of the human being as a soulless animal. Essentially, he viewed people as biological stimulus-response mechanisms that could, and should, be trained in a manner similar to circus animals. This Darwinian, materialist view of the human being reigns supreme today in the education system but has been catastrophic.

Fringe left-wing extremists who support the Frankfurt School’s anti-American agenda have dishonestly attempted to paint criticism of the relevant institutions, academics, and their ideas as “anti-Semitic.” But in reality, the dangerous ideas pose a major threat to Judaism, too, and so countless patriotic and liberty-minded Jews have also joined the fight against the Frankfurt School’s poison.

The threat of these subversives and their cultural Marxism has been recognized at the highest levels of the U.S. government, even recently. Former National Security Council Director of Policy and Planning Richard Higgins, for instance, blasted it in his now-notorious 2017 “Higgins Memo” to President Donald Trump about the ongoing war against the administration and the United States.

The wars against Trump and America “cannot be separated from the cultural Marxist narratives that drive them,” warned Higgins, saying cultural Marxism was most directly tied to the Frankfurt School. “The Frankfurt strategy deconstructs societies through attacks on culture by imposing a dialectic that forces unresolvable contradictions under the rubric of critical theory,” he warned. Higgins then quotes Herbert Marcuse, a leading Frankfurt thinker, on how to crush the political and cultural right through persecution and phony “tolerance.”

With society and civilization becoming increasingly unstable as the final vestiges of traditional education are destroyed, the Frankfurt School and its American allies such as Dewey would be pleased with their handiwork. After all, cultural Marxists including Gramsci and ISR thinkers believed that once the old order was destroyed via a “long march” through society’s institutions, Marxism could eventually triumph. On the education front, they now appear largely victorious.

But their overall victory is hardly assured. What comes next depends on whether Americans can be roused from their slumber in time to restore civilization. As the socialists and totalitarians understood well, education will be the key either way.