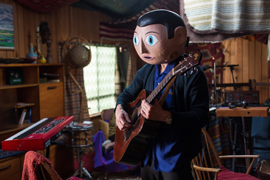 He is sort of the Glenn Gould of indie rock. He is determined not to let superficialities, like his face, distract from the music. Nonetheless, the uni-named Frank’s gigs are uniformly disastrous. He might very well be a musical genius, but it will be overshadowed by the chaos that follows him in Lenny Abrahamson’s “Frank.”

Jon is sure there is a tortured songwriter somewhere within him, but he is really just a decent, middle-class suburban chap (something the film considers rather tragic in its own right). He can at least pound out the chords on his keyboard, which is more than enough for him to “luck” into a temp replacement gig with the Soronprfbs. Yes, that is unpronounceable. That is part of the joke.

It turns out that the Soronprfbs are fronted by Frank, just Frank, a real-deal tortured singer-songwriter who never removes his large papier-mâché head. Although most of the band immediately dislikes Jon, dismissing him as a poser, Frank takes a shine to the eager outsider. Even though the gig predictably descends into bedlam, Frank offers him a permanent position in the band.

Before he realizes it, Jon is holed up with the Soronprfbs in their rustic Irish cabin, working (supposedly) on their new album. Despite the efforts of Clara, Frank’s gatekeeper, to send him packing, Jon is soon underwriting the band’s madness with his inheritance. He is also documenting it all via tweets and YouTube.

To be fair, Michael Fassbender gives an extraordinary performance as Frank. Obviously, he is laboring under unusual conditions for an actor, since he is unable to use facial expressions throughout most of the film. Largely relying on body language, he still eloquently expresses Frank’s irritability.

However, something about the film just does not sit right. It is not just Jon’s compulsive tweeting and hash-tagging constantly flashing across the screen, making Frank feel so two-years-ago.

Anyone who knows working musicians will be turned off by the spectacle of such self-defeating behavior. No professional musician would act like this, because they are professionals.

Granted, Frank and the Soronprfbs are profoundly undone by their excesses. Indeed, “Frank” the film depicts the dark side of quirkiness, clearly suggesting right from the start that Frank the character is not merely eccentric, he is genuinely sick. Yet, that close association of talent and madness is a pernicious cliché that poorly serves promising musicians struggling to make it on the scene.

While British audiences might recognize Frank as a fictionalized cousin of musician-comedian Chris Sievey’s stage persona Frank Sidebottom, he is largely his own bobble-headed man for American viewers.

However, the film’s frequent tonal shifts will makes it difficult to come to terms with him. The rather bland stock figures augmenting the rest of the Soronprfbs (including the tiresomely shrewish Maggie Gyllenhaal as Clara) provide little help.

On paper, “Frank” has the makings of a cult classic (“Fassbender Sings! In a Big Fiberglass Head!”), but the concept just doesn’t click. Maybe it is too indie and not enough rock. Fassbender puts on a clinic with his famous features tied behind his back, but “Frank” still rings hollow when it opens Friday, Aug. 15, in New York at the Landmark Sunshine.