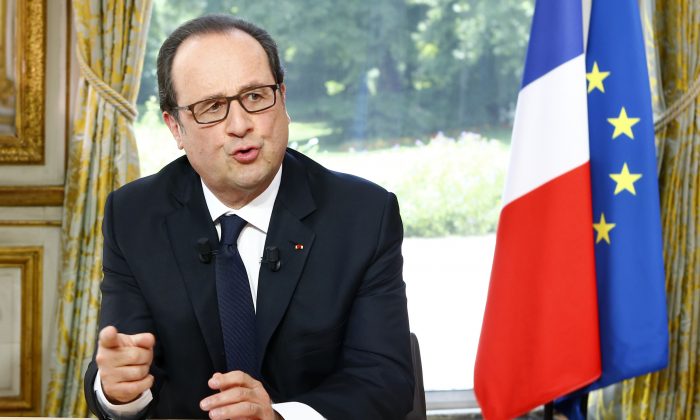 France’s State of Emergency Will Be Lifted, Hollande Says

PARIS—France’s state of emergency in place since attacks in January claimed by ISIS will be lifted July 26, the president said Thursday, but he stressed that the threat continues.

Francois Hollande spoke after presiding over the traditional Bastille Day parade with thousands of members of the military marching in meticulous formation, fighting machines rumbling down the Champs-Elysees and fighter jets overhead.

“We cannot prolong the state of emergency eternally … Is the threat there? Yes,” Hollande said.

He also said France will send military advisers to Iraq to help Iraqi troops retake Mosul, ISIS stronghold in the north. He gave no numbers or date. Hollande announced previously that the Charles de Gaulle battleship group will return to the theater in the fall.

“We must strike and strike hard,” Hollande said.

In the wide-ranging interview, Hollande also said he urged new British Prime Minister Theresa May to trigger the procedure to formally take Britain out of the European Union. And he advised, the sooner the prime minister starts the process “the better the future relationship between Europe and the United Kingdom will be.”

Messy French politics made their way into what was to be a festive day at once highlighting France’s military might and sharing a dear tradition in an increasingly fractured France.

Hollande heavily hinted that Budget Minister Emmanuel Macron’s future in the government is at risk.

The upstart minister in his first such post recently started a new movement and held a rally this week.

“There are rules in a government,” like solidarity and team spirit.

“Respecting rules is to remain in a government. Not to respect them is not to stay.”