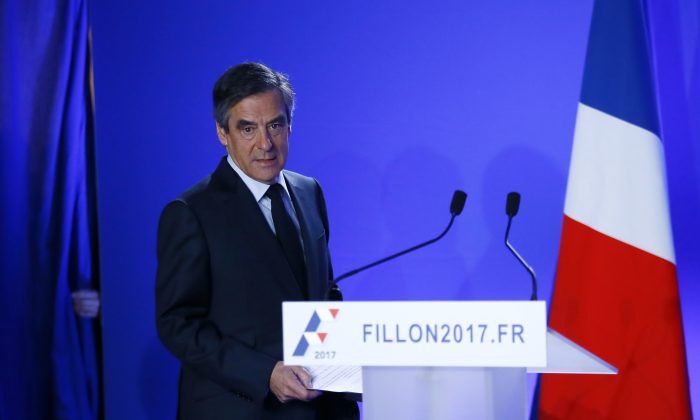 Calling the investigation a “political assassination,” Fillon urged his supporters to “resist” and said he would leave it up to French voters to decide his fate. Once a front-runner in the election race, Fillon’s chances have slipped since the probe was opened in January.

Cracks started to emerge in Fillon’s Republicans party hours after his announcement, with the resignation of a top ally. But it’s unclear whether Fillon’s decision will dramatically alter the electoral landscape, where the polls are dominated now by National Front leader Marine Le Pen and centrist independent candidate Emmanuel Macron.

The top two presidential vote-getters in France’s April 23 ballot will head to a presidential runoff on May 7.

Fillon held an emergency party meeting Wednesday after receiving the legal summons and postponed a campaign stop, prompting media speculation that he could quit the race.

“I will not surrender,” he told reporters at his headquarters later. “I will not withdraw.”

Fillon denied all allegations and said legal procedures were not properly followed in the probe, which he called unprecedented and unacceptable during a presidential election campaign. He said he was summoned for questioning March 15 “with the goal of being given preliminary charges.”

The court summons was widely expected after the financial prosecutor’s office pushed the case to a higher level Friday, opening a formal judicial inquiry.

The alleged fake jobs that Fillon gave his family are especially shocking to many voters because of Fillon’s promise to cut government spending and his clean-cut image. The investigative weekly Le Canard Enchaine reported that payments were made to his wife, Penelope Fillon, and two of their five children that totaled more than 1 million euros ($1.1 million) over many years.

Fillon initially said he would withdraw from the race if he was charged, but later said he was determined to let voters judge him instead of investigators.

“France is greater than my errors,” he said Wednesday.

The investigation is going unusually quickly by French standards—one of the reasons that Fillon claims it is politically driven to torpedo his candidacy.

The financial prosecutor’s office was created in part to speed up the often-protracted French judicial process, and the justice minister insisted in a statement Wednesday that investigating judges act independently of politics.

The Republicans party has no clear alternative besides Fillon. The runner-up in the party’s first-ever primary, center-leaning Alain Juppe, has said he would not run in Fillon’s place.

Bruno Le Maire, who also lost to Fillon in that primary, quit his position on Fillon’s campaign team Wednesday, saying he could no longer back Fillon because the candidate had backpedaled on his promise to withdraw from the race if he was charged.

Fillon has not been charged yet, but the prosecutors apparently expect he will be.

“I believe in keeping your word. It is vital to the credibility of politics,” Le Maire said.

Fillon Refuses to Drop Out Presidential Race Despite Scandal

But Bernard Debre of the Republicans rallied to Fillon’s side Wednesday, dismissing questions about whether the party should replace its presidential candidate.

“Fillon should quit politics. It’s shameful,” she said. “This is not normal, when you see what happens in other democratic countries in cases like this.”

Zach El Maataoui, a young voter who plans to cast a blank ballot in the presidential election, said he was not surprised.

“The guy just wants power. … Politicians are all scam artists,” he said.